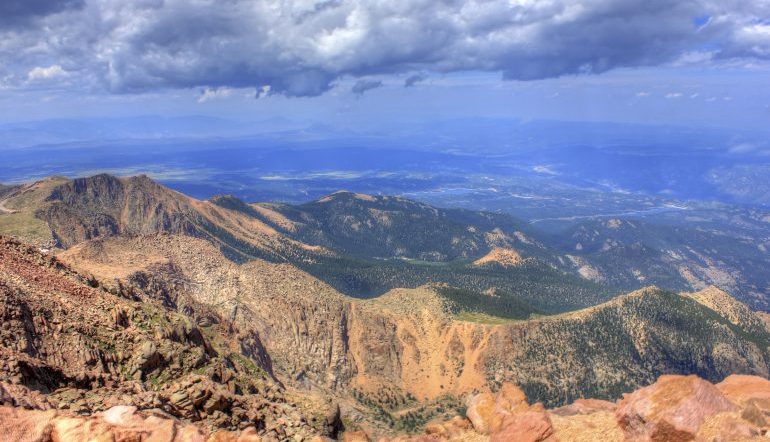 Before caravanning West with a couple of movers–who drove out from the mountains, arrived ripely hung-over, looked at all the boxes of books and 78s, then called local movers to off-load the gig–we lived half a block from a drive-through liquor store. Weeks earlier, a woman was shot dead in her car as two toddlers crawled the backseat. Each Halloween we got kids who were thrilled by our plump chocolate bars, plus crackheads. The kids had duct-taped fairy wands and masks that blinded them and the crackheads had plastic bags and gravestone teeth, stained hoodies, horrified eyes. We let them shovel candy into their bags. Most of them were neighbors.
Then, suddenly, sun-dazed Colorado was our front yard. The move was abrupt. We had to sell our house and find another within two months. So I shopped online and found handsome log homes with the Continental Divide framed in the kitchen sink window, and a skeptical realtor. After plowing through miles of mud, past tiers of mailboxes near a red dirt road, bumping along on Jeep trails for another hour or two, then reaching the dreamy homes with a view, I also found septic tanks and leach fields, propane tanks, mountain lion tracks, and a different species of people. I had to ask what a leach field was and am still grimacing. Glorious views, yes, but I was forced to confront my uselessness. People deep in the mountains were robust, weathered, Emersonianly self-reliant. Despite all the space, they lived in tight clusters, like circled wagons, with jerry-rigged plumbing and electricity, survivalist food supplies.
I, on the other hand, am frightened by fuse boxes and acquired the habit of shopping daily for fresh produce while living in Paris, preferably by walking a few charmed city blocks with a mesh bag.
So we didn’t end up living in a mountain town like Ward, which features front-yard piles of decomposing automobiles, a single restaurant that doubles as the church, Tour de France fans in seallike garments huffing up the brutal hills, vistas that obliterate language and winters that obliterate faux pioneers. The mountains do not suffer fools. That’s a trait I appreciate. But people die regularly here, many of them experts. They’re expert climbers, expert skiers, some are even expert rescuers.
Nature kills without malice. I respect the deadliness of nature, which is different than crackheads and liquor store shootings and failed levies and flaming towers. It just is. Only man is capable of inhumanity. Nature commands reverence and humility.
Initially, the West terrified me. Too much space, too much silence. I lived on Chicago’s Belmont and Clark when it was Mecca for teen runaways and addicted drag queens; then I lived in a crack neighborhood on the cusp of gaslight idyll. Sirens were constant. Suddenly, I’m in Colorado, paralyzed by advice on dealing with bears and trailhead warnings of fresh mountain lion kills. I’d dealt with gunshots and sirens and junkie drag queens, full moon crazies. But lions and bears scared me.

I was even more unnerved by how friendly everyone is, though I’ve since learned this varies as sharply as it does elsewhere. People living in the small, monied mountain towns and hikers on serene backwoods trails–incandescently friendly. People burrowed in the mountains out of self-isolation or a belief that the government is a single malevolent entity–unhinged. And armed to the gills. Parts of the West are as obscenely wealthy and class-stratified as pockets of Manhattan. And parts attract people who dwarf my misanthropy, which is of the urban variety: I love cities because I want to ignore people but still encounter them.

Free magic tricks. My son lost interest.
Anyone have an old garage door opener to use with a chicken coop?
Crab apple tree in front yard looking for a new home.
Hi all, I am looking to drill a 6-inch hole into plexiglas. Anybody out there have a 5-6 inch hole saw I could borrow for an hour? It would be much appreciated, and I could offer a beer or something in return.

When I used the listserv to ask about the cement incinerator in the backyard–used here in the Fifties in lieu of garbage pick-up–I got phone numbers for cement removal specialists, conversion ideas, plus a note from a woman in her late seventies, who said she just got rid of hers last summer. Used a sledgehammer. Felt good. Paid a neighbor kid to haul off the pieces.
I want to be her when I grow up.
I can’t pretend to know anything about the West. It takes eight generations to earn the right to call yourself a Parisienne. To be a Westerner takes longer, and rightly so. Living in Paris taught me how American I am; Colorado is exposing my Midwestern roots. But there is a specific snow-cupped mountain here that affects me deeply. When I mentioned this to a Ute Indian one night, he just nodded. That mountain will keep calling you home, he said simply. Once she touches you, you always have to come home to her.
This is Carol’s fifteenth post for Get Behind the Plough.
Images: 1, 2, 3, 4, 5, 6, and 7