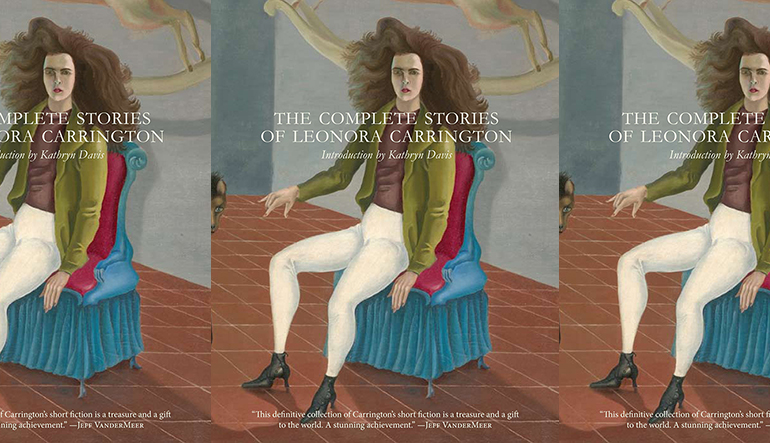 The title of Leonora Carrington’s short story “My Mother is a Cow” sounds like it could be the name of a drinking song or nursery rhyme. From this seemingly basic image, however, Carrington builds up a cosmology, in which the “feminine divine” is entirely unbounded, defying binary notions of femininity and even heterosexual notions of genesis. The speaker’s dream world feels somehow scriptural while also being irreverently unorthodox—a combination reminiscent of Carrington’s painting style (Carrington, who passed in 2011 at the age of ninety-four, also worked as a visual artist and is often associated with the Surrealist movement). Glittering with playful weirdness alongside mystical spirituality, “My Mother is a Cow” eventually converges with the Christian tradition of divine incarnation and infuses it with queerness.

The story opens with a childlike simplicity and somewhat imbalanced syntax: “Our family is modest, my mother is a cow.” At first, the notion of a cow-mother summons traditional literary associations with motherhood: physical nourishment through breastfeeding and, more generally, the idea of the feminine as corporeal or animalistic, the “matter” (from mater) which is only flesh without the humanizing spirit of the masculine. But the rest of the opening paragraph sets the tone for a complete overturning of these expectations: “Or rather, my mother is a cow-faced fan. Who is she? And does she also live behind her fan-self? A face before a face before a . . . who am I to say? We ask, here, who are you? She laughs, but receives offerings of a kind. We call her Holy One if we know her. But we are very few.”

The “Holy One,” often called the Horned Goddess, is constantly an abstract presence; she is often present in dialogue with the speaker in the form of questions and answers, yet she is also separate and untouchable. She “has no mouth, no tongue, no vocal cords,” and is never even described as having udders or breasts. Her only defining physical attribute, highlighted repeatedly, is her horns—which are generally associated more with bulls, though cows can have them too—and these horns replace the breasts and/or sex organs as symbols of her divine feminine power.

When she consecrates her sanctuary, the Horned Goddess declares that instead of doors, the entrance should be spiral: “Spiral, she said, like the umbilical ladder out of the human body; this, she added, is very holy.” The spiral is a shape that can continuously change and grow out of itself while staying essentially the same; instead of creation through (heterosexual) reproduction, which requires a linear timeline, the spiral provides a symbol of genesis that can occur outside of time. The “umbilical ladder” presents another image that, like the horns, bears vaguely gendered connotations without corresponding to any real binary. The umbilical cord connects all growing bodies to nourishment in the womb, but these lines suggests that the post-birth human navel is also a site of metaphysical bridging, a holy spiral-shaped “ladder” that connects every person’s interior to the universal exterior, without any need for penetration or the Freudian theories that so enchanted the Surrealist men.

The holy spiral’s unique relationship to change and time suggests that it could be way of circumventing a common theological problem—the apparent paradox of a divine presence who can interact with human timelines while still being eternal and, by extension, unchanging in its essence. The intersection of these two spheres requires a near-paradoxical moment of merging, in which time itself is anything but “straight”; it must accommodate both change and unchanging-ness, like the spiral.

This phenomenon draws to a height toward the story’s end, where Carrington twists both gender and time by invoking Jesus as “the Witch of Nazareth” and imagining the story of the crucifixion backwards. As with every interaction with the Horned Goddess, it appears in the form of questions and answers:

But why am I human, Holy One? What have I done to deserve this?
Human means written in flesh, the word is pain and pain and pain again—
Who was The Witch of Nazareth?
A Hieroglyph written in Blood which makes sense if the story starts with the Crucifixion and is read progressively backwards—The Christ-man was stripped of his father on the cross.

Here, the merging of divine and human spheres mirrors the merging or resolution of dreaming and reality that Surrealism aims to accomplish; visions of the “impossible” necessarily emerge from the union of that which is thought to be incommensurable. Referring to Jesus as a “witch,” Carrington collapses godly miracle and folkloric magic into a single category of events that call into question ideas of what is natural or, more broadly, “normal,” with normality being a judgment call imposed upon the subject from an outside perspective.

The fact of an exterior, identity-defining gaze looms large in “My Mother is a Cow” with the ever-present “hungry observation of the Watchers,” who hold the speaker prisoner throughout the narrative. The means of her imprisonment are vague; the Watchers are clearly not keeping her physically in a prison, but they somehow still wield immense and sinister power.

In this dream world, where the nonbinary divine is also a “cow-faced fan,” divinity cannot be about enforcing any kind of perceived normality. Instead, divinity is about opening up to the world’s delightful queerness, and naming it all as sacred.