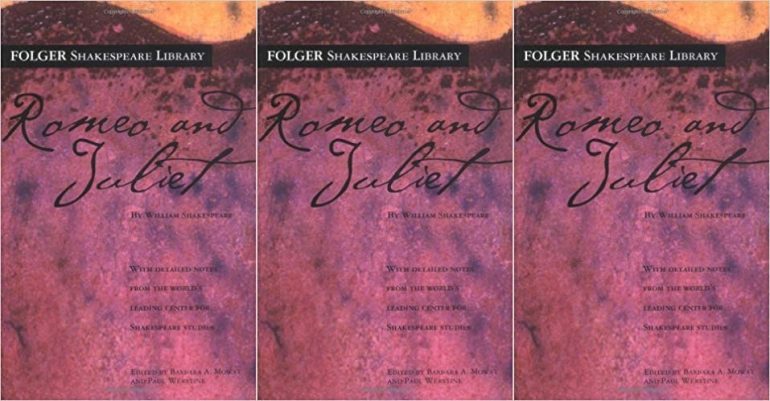 The Montagues and the Capulets don’t like each other very much.

Romeo and his cousin crash a Capulet party anyway, looking for girls.

Romeo’s on the rebound when he meets Juliet.

The party was supposed to give 14-year-old Juliet the chance to check out her potential husband-to-be, Paris.

Romeo and his cousin get kicked out, but Romeo hangs out under Juliet’s window for awhile. She says some stuff about roses.

They get secret-married the next day thanks to Romeo’s Friar Friend.

The Friar figures that if the kids get married, maybe their families will stop fighting.

On the same day, Juliet’s cousin, Tybalt, challenges Romeo to a duel. He’s still mad about Romeo sneaking into the Capulet party.

His buddy Mercutio does, though.

Tybalt stabs Mercutio, so Romeo gets angry and kills him.

Romeo is banished from Verona, but he still manages to spend his wedding night with Juliet.

At first Juliet’s upset about Romeo killing her cousin.

But then she decides to stand by her husband’s decision.

Romeo leaves the next morning and Juliet learns of her father’s plan to marry her off to Paris. He doesn’t know she’s already married to Romeo.

Juliet and the Friar hatch a fake-death plan to reunite her with Romeo the night before her marriage to Paris.

But when she gets home she finds out her wedding has been moved up to the following day.

She drinks the fake-death potion that night. The Capulets grieve and stick her in a tomb.

The Friar’s fake-death plan never gets to Romeo, so all Romeo hears is that Juliet’s dead.

He goes to her tomb and kills himself.

When Juliet wakes up, she finds Romeo next to her, dead. She stabs herself and dies for real this time.

The Capulets and Montagues see their dead kids and decide, hey, maybe it’s better if we all try to get along.