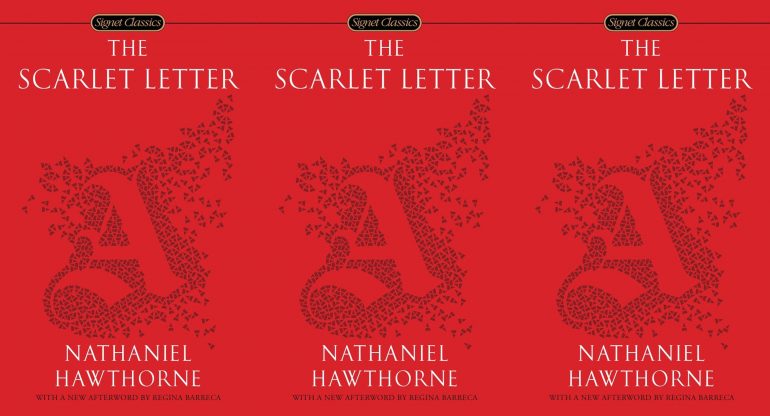 Hester Prynne lives in 17th-century Puritan Boston. She’s been branded with the scarlet letter A because supposedly she had an affair.

This makes sense to everyone around her, because as far as they know her husband never made it over to the New Land and yet she currently has an infant daughter named Pearl. Even with the town fathers publicly humiliating her, however, she refuses to reveal her lover’s name.

Turns out Hester’s husband did, in fact, make it to Boston. (Gasp!) He calls himself Roger Chillingworth, but when he tells Hester who he really is he swears her to secrecy.

He practices medicine and his end goal is revenge against Hester’s lover.

Except that Hester refuses to reveal the other man’s identity.

Meanwhile, a young minister named Dimmesdale keeps the community officials from separating Hester and her child. He suffers from heart trouble that is psychological in nature.

Dr. Chillingworth moves in with him to provide 24-hour care. He suspects that Hester’s secret and the minister’s health problems might be linked.

Dimmesdale gets worse and worse.

When Pearl is seven, she and Hester come upon Dimmesdale about to throw himself off the town scaffold. The two convince him not to jump, and instead to come to Europe with them to start a new life.

Unfortunately, Dimmesdale soon has another change of heart, climbs to the town scaffold (again), and reveals himself as Pearl’s father, showing off his own scarlet A branded into his chest. Then he falls over dead and Pearl kisses him.

Without the hope of vengeance to keep him going, Chillingworth dies a year later.

No one knows what happens to Hester and Pearl after they leave Boston. Only that Hester comes back when she’s older to wear the scarlet letter. When Hester dies, she’s buried next to Dimmesdale. They share a tombstone marked with a scarlet A.