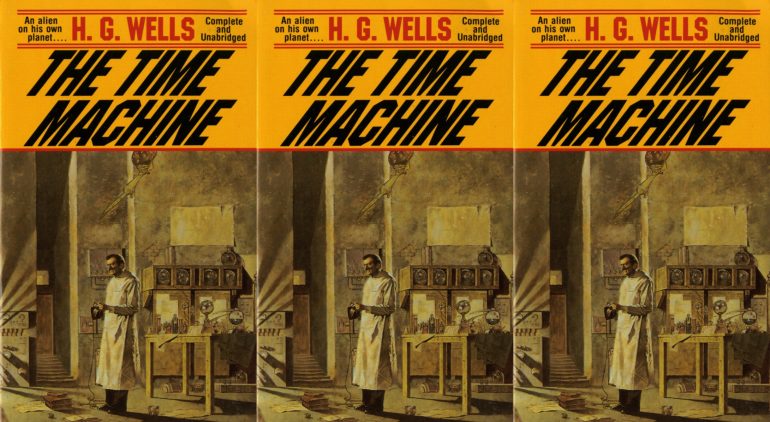 It’s winter here in Iowa, which makes my Floridian self wish for seasonal time travel.

Unfortunately, the closest I’ve come to realizing this dream is watching Back to the Future and reading H.G. Wells’s The Time Machine.

In The Time Machine, the Time Traveller makes a time machine and jets forward to the year 802,701 A.D.

Basically he ends up in paradise with tiny human-ish creatures called the Eloi. They give him some fruit. Namaste.

He sets off to explore and when he comes back, he discovers his time machine is missing.

He figures it’s hidden inside the pedestal of a sphinx statue. But he can’t get it out.

At night he starts seeing white, ape-like creatures called Morlocks. They live underground and feed on the Eloi.

After this discovery, he befriends an Eloi named Weena when he saves her from drowning. It’s pretty innocent.

Then he finally gets brave enough to drop down a well into Morlock territory to try to find his machine.

He fends the Morlocks off with matches, but they still chase him out, and he’s still without a time machine.

The Time Traveller takes Weena to the Palace of Green Procelain—the remains of a museum—where, with the aid of matches and camphor, he fashions weapons to fight off the Morlocks.

That night, while escaping through the woods, he accidentally sets a big fire. Oops.

Between the fire and the ensuing battle, a ton of Morlocks are killed. Weena dies, too.

Then the Time Traveller discovers that the pedestal’s open. It’s a trap set by the Morlocks, but before they can catch him, he hops in his machine and zips away.

He hops around time and ends up on a beach where he’s attacked by giant crabs.

After that he decides to check out the way-future: 30 million years in the future. Things are not good there.

So he goes home. Time traveling is exhausting.

But he leaves the next day never to return again.

So it might be a good thing that I can’t actually travel through time. I’ll take winter over Morlocks anyday.