The Literary Boroughs series will explore little-known and well-known literary communities across the country and world and show that while literary culture can exist online without regard to geographic location, it also continues to thrive locally. Posts are by no means exhaustive and we encourage our readers to contribute in the comment section. The series will run on our blog from May 2012 until AWP13 in Boston. Please enjoy the eighteenth post on Nottingham, UK by Éireann Lorsung – Andrea Martucci, Ploughshares Managing Editor

Nottingham is situated in just about the center of England—which isn’t to say the center of Britain, as it’s pretty far south when you count all of Scotland in. Hedged in by Lincolnshire fens to the east and the Peak District to the west, Nottingham huddles in the liminal space between north and south. It’s just two hours from London by train (six from Edinburgh, counting transfers), and these proximities give it a funny kind of ambition. It’s a city that wants to be something on its own terms, not the terms of the metropolises nearby. The proliferation of publishers, writing programs, courses, readers, writers, events, and support for all of the above that exist in Nottingham and the surrounding county (Nottinghamshire) attest to this ambition.

What the City is known for/what makes it unique: Racy, dead writer-guys: both D.H. Lawrence and Lord Byron lived here. Lawrence’s Lady Chatterly’s Lover was banned in the UK and elsewhere, while Byron was known for his scandalous liaisons and love affairs.

Literary references: Nottingham infamously appears in Marx’s Kapital (it was a center of lace-making in the 18th and 19th centuries). Lady Chatterly’s Lover is set in Nottinghamshire, as are Sons and Lovers, The White Peacock, and The Rainbow (all D. H. Lawrence). The Loneliness of the Long-Distance Runner and Saturday Night and Sunday Morning are set in and around Nottingham; so is B.S. Johnson’s The Unfortunates. Jon McGregor’s book Even the Dogs is set in Nottingham, and stories from his collection This isn’t the sort of thing that happens to someone like you are also set there. Of course, the Robin Hood stories are from the county as well!

There are two universities here, Nottingham Trent University (run by Sarah Jackson) and the University of Nottingham (run by Matthew Welton; Thomas Legendre, resident in Edinburgh, teaches fiction). Both offer MA and undergraduate programs in creative writing. The University of  Nottingham also offers an undergraduate course in Creative and Professional Writing. Apart from degree-granting institutions, you can take short courses through the Nottingham Writers Studio or watch the notice board at Writing East Midlands for information about more independent courses.

Where to find reading material:

One thing Nottingham does lack is bookshops. There is one very good general-interest independent, The Bookcase in Lowdham, about ten miles outside the city; take the train there (it’s on the Nottingham-Lincoln line, with a ten-minute walk from the station to the shop). Other than this, your best bet for interesting reading are second-hand bookshops; the Oxfam Bookshops in Nottingham city center and in Beeston (an adjacent town near the University of Nottingham campus) are both reliably good. There is also a Bookwise bookshop which sells books and music in Nottingham city center (Hockley). Nottingham Contemporary (see below) has a small selection of books mostly to do with art, design, and theory. Last but not least, Page 45 in the city center is a great comics shop.

There are both city and county libraries in Nottingham/Nottinghamshire, but they are not completely integrated (there seem to be two systems which overlap—it’s been five years and I still haven’t entirely figured this out). The Nottingham central library is dark and often feels damp; some of the smaller libraries can be quite nice to work in. There is also a subscription library, where members pay a fee to belong; this is the Bromley House Library, and its dark wood bookshelves, high windows, spiral staircase, and whispering, helpful librarians are exactly what a public library should look like. Annual membership is £80. Library cards for city and county libraries are free.

Where to get published:

Local publications run the gamut, from Left Lion, a monthly free paper that has a poetry section featuring everything from limericks to rhyming rants, and The Nottingham Evening Post which prints treacly Hallmark verse, to magazines like Staple and 111O (full disclosure: I edit 111O). There are lots of local presses in varying states of activity, publishing everything from anthologies to novels, including Arundel, Leafe Press, Five Leaves, Weathervane, Pewter Rose Press, Serotine, Candlestick, Shoestring, and MIEL (again, disclosure: I co-run this press). There are even more small to mid-sized presses in the surrounding areas (Longbarrow Press, based in Sheffield—about an hour on the train—for example) and some, such as Nine Arches Press, regularly visit Nottingham to put on events.

If you like to write in cafés, there are really only two places you need to know about: Lee Rosy’s and The Bean. Both of these spots are writer-friendly; as long as you buy something every so often, you can easily sit for hours.

The Bean, in Beeston (a small town/suburb to the west of Nottingham, bordering on Nottingham University’s campus and inhabited by families and students) is right in the middle of Beeston’s lively shopping area, not far from the Beeston Oxfam Bookshop. The best space to work is upstairs, where there are colorful Eames-style chairs, and accordion music from passing buskers sometimes drifts in through the open windows. The staff are very friendly, there’s a student discount, and they make their own cakes. Besides cakes, tea, coffee, extremely sweet chai, cocoa, and cold drinks, The Bean serves hot sandwiches and sometimes soup. Saturday mornings the upstairs is often full of children.

Lee Rosy’s Tea Room, or, as it’s less formally known, Lee Rosy’s, is in Hockley, an artsy area in Nottingham’s city center where you’ll also find an arthouse movie theater, trendy clothes shops, a great restaurant serving food from southern India, and well-stocked secondhand shops (including an Oxfam Bookshop). The staff are mostly art and design students from Nottingham Trent University and are almost without fail working on their disdain for their customers, but the drinks are great and the owner, Andrew, is lovely. Lee Rosy’s stock packets of the tea they sell (about a hundred varieties), so you can take some home if you want to cultivate a café atmosphere in your apartment. They sell sandwiches, soup, cakes, and snacks as well as tea, coffee, cold drinks, and hot cocoa. The music is often loud. The people-watching is great. 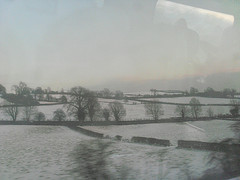 Apart from these cafés, you can also find inspiration and writing space in Nottingham’s Lace Market at Nottingham Contemporary, Nottingham’s three-year-old international contemporary art space, which hosts exhibitions, talks, movie screenings, workshops, and classes of all kinds. There’s also a café. Kitty-corner from the gallery you’ll find Delilah, a great deli/café. Have an espresso at the counter with the newspaper, then sit and look at the rain or browse their selection of fancy foodstuffs. St. Mary’s Church is rarely occupied and provides a quiet, out-of-the way space to sit and think, also in the Lace Market. Elsewhere, you might try the airy, well-curated New Art Exchange, which is in Hyson Green, a neighborhood on Nottingham’s north side, or take a walk through one of the cemeteries which border the city. And am I the only person (surely not) who likes to write in train stations? A return ticket to a nearby station (try Burton Joyce, Beeston, or Basford) will cost you about £3 and allow you to sit on the platform or in a waiting room until your local train, conductor and all, pulls up. If you’ve got a bit more money, take the train from Nottingham to Skegness on the east coast (about £20 return); that’ll give you four hours of writing time (with no internet!) on a local train.

There are two book festivals—Southwell, coordinated by the Nottinghamshire County Libraries, and Lowdham—which both take place in the summer. At the moment there are also plans for a ‘festival of words‘ to take place in February 2013. Both universities run reading series of varying frequency. Fall 2012 sees the (re-)launch of Beeston Poets.

Éireann Lorsung is the author of Music For Landing Planes By (Milkweed Editions, 2007) and Her Book (Milkweed, forthcoming 2013). Her writing appears or is forthcoming in Colorado Review, diode, Free Verse, DIAGRAM, The Collagist, and The Pinch. With Jonathan Vanhaelst, she runs MIEL, a micropress (miel-books.com). She edits the journal 111O (111oh.com). Twitter: @MIELbooks.