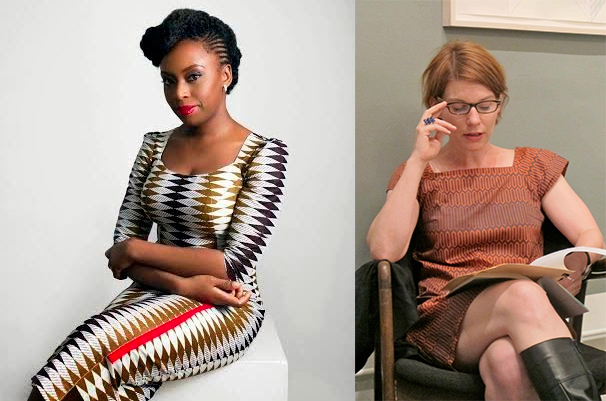 Disclaimer: I bet they’d love each other.

There are two authors who have a special place on the fiction shelves at the bookstore where I work. The first is Chimamanda Ngozi Adichie, though “on the fiction shelves” isn’t quite an accurate locution in her case, since we can’t actually keep her books on the shelves. At least three-quarters of our customers pick up Americanah, and a hell of a lot of those customers take it home. I have a line ready and waiting for them: “Reading Americanah is like having an exceptionally intelligent best friend.” And it’s true.

But Adichie is an international literary superstar. She splits her time between the U.S. and Nigeria. She is not going to walk into our store. (Though certain other international superstars have.) Maud Casey, on the other hand, is a regular customer. She lives nearby. When I read her books while at work, as I frequently do, I always wonder if she’s going to come in and catch me in the act. It’s like walking my dog past my crush’s house in high school, which was a habit of mine. I was always terrified he would look out the window and see me, and yet I wanted nothing more.

There are not many novels that everybody who works at this bookstore loves. Americanah is one. Casey’s The Man Who Walked Away is another. (Shout-out to the third, Valeria Luiselli’s The Story of My Teeth, about which I’ve written elsewhere.) My favorite of Casey’s three books, though, is her debut novel, The Shape of Things to Come, and it is the one that I think plays best with Americanah, which, yes, is my favorite of Adichie’s.

In the first few pages of The Shape of Things to Come, the protagonist, Isabelle, finds herself unable to “deny life’s weight,” as she puts it. She’s

always harbored hope for better things, operating on the guarantee theory: Eventually you find yourself in that home, with that husband, with some small children who need you—at the very least to reach things for them—with a job that makes you occasionally happy… But today my quivering reflection says to me: It is conceivable that you will work at the phone company and go home to Jell-O for the rest of your life.

Her response to this realization is to photocopy her naked body until her boss walks in and fires her. She then moves home to Standardsville, Illinois, where she lives with her mother, befriends her lonely across-the-street neighbor, and embarks on a terrible temp job and a terrible semi-courtship that both involve wigs. I hope that it is clear to you by now that The Shape of Things to Come is an exceptionally funny book, and an exceptionally sad one, too.

Americanah is not sad at all, and Adichie’s humor isn’t sly like Casey’s. Nothing in Americanah is bleak. Although it’s frequently bittersweet, and its protagonist, Ifemelu, is often and rightfully angry, the novel is suffused with a kind of early-Obama optimism. The 2008 election, in fact, is a key part of the book. Ifemelu and her American boyfriend Blaine survive a major fight,

“mostly because of Barack Obama … On election night, before Blaine kissed her, his face wet with tears, he held her tightly as though Obama’s victory was also their personal victory.”

On her blog, Raceteenth, Ifemelu writes about Obama and about Michelle, glorying

“in the off-beat dryness of Michelle Obama’s humor, the confidence in her long-limbed carriage.”

There’s some off-beat dryness in Adichie’s humor, too, but it’s not nearly as off or as dry as Casey’s.

In fact, there is rarely much off about Adichie’s characters. Half of a Yellow Sun and Purple Hibiscus are sadder than Americanah, even tragic, but their characters don’t get derailed. And Ifemelu—well, she’s not a protagonist, she’s a heroine. She is brilliant and beautiful and empathetic and she learns from her mistakes. That last is important: she makes mistakes. She’s not unreal. She’s the best of the real.

I’ve only encountered one other heroine like Ifemelu: Jane Villanueva, the title character on Jane the Virgin, which is an absolutely stellar TV show. I tend to describe it as a meta-telenovela, and depending on who you are and how bad a day you’ve had, you can watch it with or without the prefix. It’s a show that can be gobbled up like candy or slowly and rigorously analyzed, and the same is true for Americanah. The first time I picked it up, I read it all the way through in a state of total human delight. Contrast: I can’t read more than two of the stories in Maud Casey’s collection Drastic without bursting into tears.

This is not to say that Adichie is only happy and Casey is only sad. But in Americanah, Adichie is playing with happy tropes. She’s taking on the marriage plot; you could say she’s writing a meta-romantic comedy. It’s certainly a love story. There’s plenty of dating in The Shape of Things to Come, and some sex, but the only person Isabelle needs to fall in love with is herself.