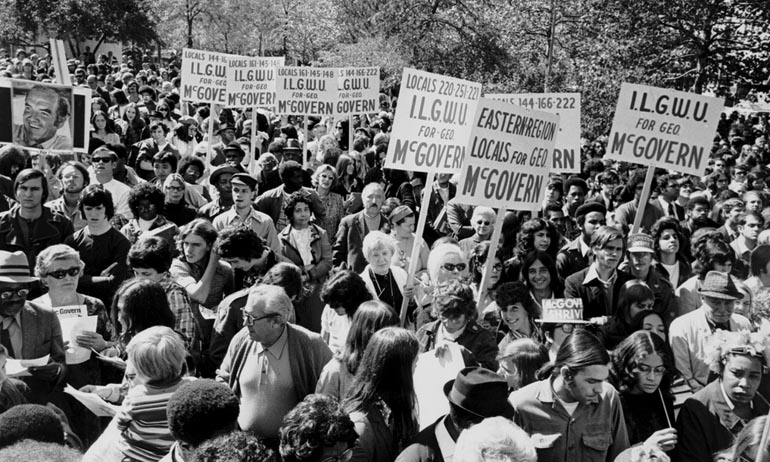 Every generation has expectations. Here in America our expectations are grand. School followed by college, followed by a good job, a good marriage, a nice house in a good neighborhood where we’ll raise some good children who will have even more good things than we have. It’s the American Dream.

But something happened. The government seems intent on shredding the already tattered social safety net that never managed to catch everyone to begin with. Programs for education and the arts, for clean water and national parks are in danger. We’re concerned. We call, we write, and we march as one does in a democracy. But it hasn’t even been six months and some of us wonder how long this is going to go on. Instead of looking ahead to visions of a shiny future, we look back to similar turbulent times, hoping somebody left us a road map.

At first I thought Joyce Maynard’s Looking Back: A Chronicle of Growing Up Old in the Sixties might offer some guidance. Written in 1973, Maynard takes readers practically blow by blow through the turbulent 1960s. I read this book several times as a teen, and I loved what I thought was Maynard’s world-weary, slightly pretentious attitude. But I was reading a chronicle of the 1960s in the 1980s, when things had calmed down a bit. I thought the profound sense of cynicism hanging over the book was just teenage angst. Now it’s easier to understand what she means when she writes that there wasn’t much distance between Bob Dylan and Secretary of Defense Robert McNamara:

Like characters in an Ionesco play, we take absurdity unblinking. In a world where military officials tell us “We had to destroy the village in order to save it,” Dylan lyrics make an odd kind of sense. They aren’t meant to be understood; they don’t jar our sensibilities because we’re used to non sequiturs. We don’t take anything too seriously these days. (Was it a thousand earthquake victims or a million? Does it matter?)

Like a lot of teens and college students then and now, Maynard was out campaigning for Democratic presidential candidates, Eugene McCarthy in 1968 and George McGovern in New Hampshire in 1972. Being on the losing side of a cause and a candidate you believe in can be a soul crushing experience. The exuberance of 1968 became the hard slog of 1972. “I was suddenly struck by the fact that we’d all been compiling similar figures—how many miles we’d walked, how many houses we’d visited. In 1968 we believed, and so we shivered; in 1972, we shivered so that we might believe.” Again I find a parallel between my enthusiasm for Barack Obama and my intense need to see Hillary Clinton win the White House in the pages of this book.

Maynard diagnoses the cause, but she doesn’t have a cure. And in hindsight she may have been too quick to give up the fight. An essay from Polish writer Danuta Hinc reminds us that American politics are not half as bleak as they have been in the past.

Hinc, now an American university professor, grew up in communist Poland where she carefully trained herself to measure her words and her actions even though she deeply opposed the government. “No one believed communism would fall, nevertheless, everyone persisted,” she writes. “It felt like a Kafkaesque asylum.” The fear of speaking out and the fear of retribution was real for Hinc, whose grandfather was imprisoned after a private conversation was relayed to authorities by a neighbor. In 1991, after martial law was declared in Poland, she left for a new life in America. “I promised myself to forget who I was for the first twenty-five years of my life,” she wrote. “I didn’t want to be political anymore. There was too much pain in it, and too much pain in remembering the extent to which it affected the lives of everyone I knew.”

Like everyone else, Hinc followed the first days of the new administration on social media. She was startled by the way her American friends and neighbors were so willing to share their feelings, both pro and con, with anyone and everyone who might be listening. She remained quiet, unsettled, and suspicious.

“I felt a familiar pull to the ground,” Hinc writes. “And I knew, I remembered again. It was a heaviness I couldn’t exactly locate, but I knew that my stride changed, became slower, less fluid. My mind started running in the same habitual circles I thought I’d long forgotten.”

But America in 2017 is not Poland in 1981. Hinc knows this, but old habits and old memories linger. As she tries to unlearn old habits, she suddenly remembers a school field trip in Poland when a classmate took her side in a debate with a judge that could have had dire consequences. What saved them both was when the rest of the class began clapping and cheering in support. Her advice to her American friends and neighbors is to persist. “I have to force myself to remember that back in communist Poland we won,” she writes. “We persisted against all odds.” She knows there is strength in numbers. “He can’t fire us all,” she says finally. “There are too many of us.”

At the end of her book, Maynard opts out, even though she knows there’s more to be done. “I can’t wait to see how things turn out,” she says. “But I wish I weren’t quite so involved. I wish it weren’t my life that’s being turned into a suspense thriller.” She says she just wants to be happy. “I’ll vote and I’ll give to charity, but I won’t give myself.” But Hinc’s experience in the Eastern Bloc comes to a different conclusion that democracies have always taken to heart: getting involved and speaking out is a proven path to change.

Tags:Danuta Hinc, Joyce Maynard, Looking Back: A Chronicle of Growing Up Old in the Sixties