Recently I enjoyed a wondrous weekend in Austin during which I added a third tattoo to my collection. It so happens this is my second literary tattoo. The first, inked roughly a year ago, was a celebration of a number of triumphs, among them my first paid publication and meeting my idol, Margaret Atwood. I went with an Atwood quote, too, although not the popular “Nolite te bastardes carborundorum” from The Handmaid’s Tale. Instead, I selected a quote I had long ago marked for my first literary tattoo, should I ever decide to get one: “The living bird is not its labelled bones,” from The Blind Assassin. Some lines hit us so hard, it is a physical reaction. I gasped the first time I read it.

I’m certainly not alone in my love of literary tattoos. Buzzfeed ran a list last year of the coolest lit ink; Contrariwise and The Word Made Flesh are websites devoted solely to showing off words inscribed in skin. The selection is wide—anything from paragraphs adorning ribcages to a single word. Kurt Vonnegut’s “So it goes” has such popularity, Contrariwise has So It Goes Saturdays, dedicated only to showcasing people with that specific line.

There are also those who, like my tattoo buddy Katie, elect to get literary-associated things instead of actual lines—she now sports quotation marks and an ampersand. But looking at Pinterest boards and blogs, the prevailing theme in literary tattoos is allowing the ink from the page to spill onto the skin with the words that are already imprinted on the mind and heart.

What makes us cling to certain literary quotes? What is it about a few black lines that can capture our imaginations and ignite our souls? For me, it is like falling in love—while I can explain it to a point, some of it is beyond explanation. It comes from the gut. The first line I ever fell for was from The Great Gatsby, when I read it in tenth grade:

The late afternoon sky bloomed in the window for a moment like the blue honey of the Mediterranean—then the shrill voice of Mrs. McKee called me back into the room.

Although I’d been a reader for years, I fell in love with the poetry in that line, particularly the “blue honey of the Mediterranean.” Fitzgerald, in a single sentence, forever changed the way I viewed writing. I highlighted it, starred it, doodled it on my notebook.  It was like my first crush, except it never faded or disappointed me. Thankfully, it also never expected our relationship to be exclusive because just a year later I fell hard for the closing line of Dante’s Inferno.

I saw some of the beautiful things

that heaven bears, through a round opening;

and thence we came forth to see again the stars.

The passage itself is beautiful in either language, but within the context, having just passed literally through Hell, it’s transformative. Someday I hope to add it to my tattoo collection, although I have not determined if it will be in Italian or English.

I still have my sophomore literature notebook, where Dante is joined by Shakespeare (“What’s done cannot be undone”), Salinger (“I’m sick of not having the courage to be an absolute nobody”), and Sophocles (“Leave me to my own absurdity”), among others. To be fair, there is also some Trent Reznor and Green Day. I may not have had a boyfriend, but I had a deep love of gloriously spun words.

At a friend’s suggestion, in college I started a quote journal. This expanded my collection beyond the literary and lyrical to movies, interviews, or any turn of phrase that caught my attention. I even wrote each quote in a different handwriting for reasons I can’t really recall, though it does look cool in retrospect. Sometimes I just look through it, scanning the things that have at some point in my life resonated. Even though a few no longer impact me in the same way, it is telling to view what did grip me at various points in my life.

When picking something to tattoo, it’s crucial to select a quote that lasts. Perhaps that’s why so many literary tattoos tend to come from children’s books: they represent a lifelong relationship with something that not only struck the imagination, but shaped the person. My most recent addition, while not from a children’s book, has lived with me for years. When I first read Frank McCourt’s Angela’s Ashes, I was swept away with his lyric style. Passage after passage was highlighted and committed to memory. My favorite, though, was the most simple: 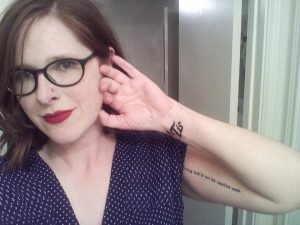 Post-tattoo selfie (PS. Guess what, Mom? I got a new tattoo!)

The final line of the book (and subsequently the title of its sequel), it encompasses everything breathtaking about McCourt’s memoir. While the world may be ripe with tragedy and darkness, ‘tis in fact a wonderful place.

Of course taken out of context, the tattoo, like the Atwood further up my arm, has limited meaning to other people. So keep that in mind should you elect to get a tattoo of a quote that is not familiar to others or is perhaps less literal—you’re going to have to explain it a lot. Or, you can do what I sometimes do and say, “Well, what does it mean to you?” It’s always interesting to hear how people interpret things, and if nothing else, it opens up a potentially fascinating discussion. (My science colleagues are especially fun to talk to about how the living bird and its labelled bones are not the same entity.)

As a reader, I adore finding those lines that course from the page through me in a current of electricity. As a writer, I would never set out to write something that I believe quote-worthy. What a futile and vain effort that would be. Rather, I think about what speaks to me in great turns of phrase, things like the language, the structure, or sometimes just the grain of truth that connects on a visceral level. All I can do is push myself to stretch my limits, to look beyond the familiar, and revise until every word is where and what it needs to be.

What literary tattoos would you or have you gotten? What lines from literature have become your soul mates?