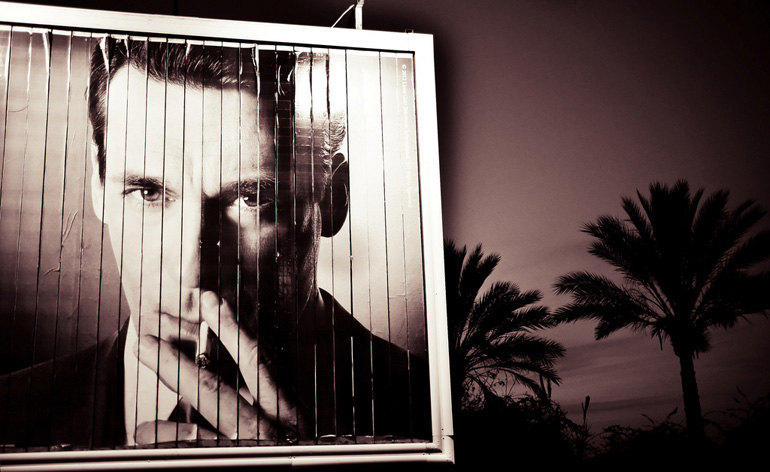 Mad Men was known for its liberal usage of literary allusions, most of which were exactly what you’d expect. Betty is recommended F. Scott Fitzgerald because she’s dissatisfied with her apparently glamorous life. Don recites poetry by Frank O’Hara that references “the catastrophe of my personality,” because he can’t overcome his tragic flaws. Ayn Rand makes an obligatory appearance. But only one allusion lasted the entirety of a season: Dante’s Inferno.

In the first shot of the sixth season premiere, Don is seen reading the Inferno on a beach in Hawaii, and even recites the first few lines to the viewers in voice-over. He’s at the top of his field professionally, and he’s on vacation with his beautiful, intelligent wife, Megan. And yet, he’s led astray from the path of righteousness as the result of what is essentially a midlife crisis, similar to Dante’s thirty-five-year-old narrator:

Midway in our life’s journey, I went astray
from the straight road and woke to find myself
alone in a dark wood . . .

How I came to it I cannot rightly say,
so drugged and loose with sleep had I become
when I first wandered there from the True Way.

Those lines set the stage, not only for the rest of the episode, but for the rest of the season. The most consistent visual motif in season six is the company elevator, culminating in Duck pointedly asking Don if he’s “going down” after the firm puts him on leave in the finale. Don is continually faced with his own mortality through other characters’ deaths and a near-death experience of his own. His forehead even gets progressively sweatier over the course of the season, as if he’s descending through the circles of hell. And indeed he is, as his character arc over the course of the season is structured around the nine circles of hell in Inferno.

First, flashbacks to Don’s childhood reveal that after his father died, he and his stepmother lived in a whorehouse. This is consistent with the first circle of hell, Limbo, which houses those whose lives were neither virtuous nor sinful, but simply “miserable” and, ultimately, forgotten by all who knew them. This last is especially applicable to Don, who ensured that he would be utterly erased from his former life.

As for the second circle of hell—lust—Don is revealed to be having an affair with his downstairs neighbor, Sylvia. While this is hardly the first extramarital affair Don has had, it’s the most significant, since he had at one point fully committed to Megan and their life together. As a result, this affair is much more likely than the others to send him into an existential tailspin, because it might just mean that he is completely hopeless. He might not be capable of truly loving anyone.

The third circle of hell is reserved for the gluttonous, those who “made no higher use of the gifts of God than to wallow in food and drink.” Heavy drinking is a staple of Mad Men, but Don drinks more in this season than in any other (hence the sweaty forehead), making the transition from functioning alcoholic to alcoholic proper. This habit, more than any other perhaps, leads to his fall from grace at the company.

By the end of the season, Don systematically checks off the rest of the boxes. In terms of greed, he travels to Los Angeles (another tropical clime) to pursue new clients, has another existential crisis while on drugs, and ends up lying facedown in a pool. He takes out his deep-seated anger on his mistress, Sylvia, when he engages in BDSM behaviors without asking her first, and then abandons her in a hotel room. He exhibits wrath when he fires Jaguar as a client, partially out of revenge for their mistreatment of Joan. Fraud is, of course, inherent to Don’s entire life in New York, right down to his name. And in the season finale, he covers heresy and violence in one fell swoop when he punches out a priest in a bar.

And then, finally, he descends into the ninth circle of hell, reserved for those who commit treachery. Many critics have noted that the premiere episode itself follows the structure of Inferno, ending with a shot of Don betraying Megan with Sylvia. But according to Dante, the most egregious form of betrayal is committed against a “benefactor,” or someone whom the perpetrator loves without any form of obligation. And while technically, Dante was referring to all familial obligation, including parent-child relationships, Sally is the only Draper child whom Don arguably loves as a person. Indeed, she may be the only person in the world whom Don genuinely admires (aside from maybe Peggy, who has a similar father/daughter relationship with Don). So near the end of the season, when Sally finds Don in bed with Sylvia, he’s not only exposing his ugliest flaws for the first time, but betraying the only person he truly loves.

As a result of this intricate allusion to Inferno, the somewhat redemptive ending of the season may seem out of place. His betrayal of Sally, more than any other event in his life, causes Don actual shame, a sentiment that heretofore the audience had no idea he was capable of. He hits rock bottom regarding his alcoholism and, more importantly, finally tells the truth about himself. Rather than maintaining the Don Draper mystique at work, he openly tells his clients that he was an orphan raised in a whorehouse. And rather than plying Sally with more lies, he takes her to see his childhood home (or lack thereof), so she can understand his actions better. If Don is simply descending into hell this season, then why would the final shot of the finale be a hopeful one (at least by Mad Men’s standards)?

In reality, the reference to Inferno actually foreshadows Don’s redemption arc. While Inferno is the best-remembered section (much like Mad Men is most remembered for its portrayal of vice), it is only one part of the Divine Comedy, which follows a soul’s journey toward God. For Dante’s protagonist, descending into hell is the proverbial wake-up call that leads him to spiritual redemption.

This can be seen at the end of Inferno, when Dante learns that the ninth circle of hell is at the center of a hole that runs all the way through the Earth. Quite literally, the only way out is through, and shortly after Dante and Virgil pass through the center, they are able to find their way back to the surface. Like Don, Dante doesn’t end this chapter in heaven, or even well on his way to heaven, but simply in view of the heavens that he hopes to someday reach.

He first, I second, without thought of rest
we climbed the dark until we reached the point
where a round opening brought in sight the blest
and beauteous shining of the Heavenly cars.
And we walked out once more beneath the Stars