Little Big Bully, a new poetry collection by Heid E. Erdrich, is richly challenging and uniquely rewarding. While Erdrich, who is Ojibwe enrolled at Turtle Mountain, invokes the particular knowledge and experiences of Indigenous peoples throughout her poems, this collection, as the Author’s Notes indicate, is “crafted . . . for various audiences, both Native/Ojibwe and others.” Indeed, Erdrich’s central effort “to understand the mechanics of abuse” in its many manifestations identifies a particularly urgent challenge of the contemporary moment for settlers and Native people alike. Little Big Bully engages with physical and sexual abuse as well as abuses of Native communities and the natural world. The poems evince anger—but also rise with conviction and hope.

The collection is equally an accomplishment of form as it is one of content. It is framed by Erdrich’s interrogations, introduced by the title of the opening poem, “How,” and then developed with more focused and collective urgency—“How did we come to this”—by that poem’s final line. Throughout the collection, Erdrich untangles the imbricated traumas, both large and small, that constitute the “this” that “we” have “come to”—whether willingly or otherwise. She straddles the tension between the need to honestly examine a particular moment and the destabilizing fear inherent in the very idea of doing so. The speaker of “All Nations,” for example, attempts to momentarily forget the reality of mass avian extinction through the repetition of the phrase, “I would like to think”: “I would like to think they’ve gone off somewhere / safer . . . Not gone gone / just off / not halved . . . I like to think / they will be back.” Likewise, “Sovereign Love” points toward the difficulty of looking directly at what we might desire most: “When I look upon the beloved / the real beloved,” the opening lines exclaim, “I might avert my gaze.” Though seemingly paradoxical, this manner of avoidance comes to bear directly on the question of the autonomous self as such: “it is only in holding your eyes away from mine / that I can stay sovereign in my love.”

Ultimately, Little Big Bully neither grants us permission to “avert [our] gaze” nor presents strategies for eliding such circumstances. Rather, its power lies most directly in the exertions of courage that appear, time and again, at defining moments of unimaginable challenge. In “The Bully Treaty,” Erdrich invokes the aftermath of the 2016 U.S. election (“champagne left popping in the flute . . . head in hands on the stoop”) not as an aberration or sudden shock but with the resignation of expected arrival: “A great curtain drew aside / everyone else could see / what we always knew.” Still, she confronts the racism of the current U.S. administration and its supporters with defiance, rather than quiet appeasement—and responds to a white supremacist meme mocking Native genocide by asserting the power of her “complex thought” over its “simple” desire to “shut up your smart mouth.” Nowhere is this courage more evident or felt more intensely than in “Story of These Creatures,” a poem that begins with the fairytale-esque line, “Three creatures in a story,” before transforming its “storybook forest” setting into a site of horrific assault. Erdrich makes this transformation happen as if to invoke Audre Lorde’s principle “that what is most important to me must be spoken.” She fills silence with language and action in a moment of agency and resolve rendered all the more stunning by its quietly casual tone. “The story’s up to me,” she declares. “Might as well type it / black and bold.”

Humor darts through the collection as well. “Fauxskins,” for example, is one of several poems that comically addresses the persistent appropriation and theft of Native cultures and identities. The targets of Erdrich’s mocking scorn emerge in familiar fashion. The poem begins with the mail-order genetic test: the search for DNA to confirm the family legend of a “Generokee” grandmother or validate the “phrenology” of “their uncle’s nickel profile.” Next, the obligatory nature fetish—“I’ve always been so close to nature so close to animals so close to rocks”—combined with some competitive Indian hobbyism: “I am right behind you getting better than you at the language the beadwork the smudge.” Add a dash of “spirit animal / Red Pony / High Wolf / Sky Wolf / Flying Wolf / Woof Woof / Names always in English” and some “one-time visions” of “Geronimo (Sitting Bull) / (Crazy Horse)” that “came to me in a dream”—and the result is the perfect “part Indian,” the declaration that “I’m probably more Indian than you.”

“Fauxskins / blood seekers / shifters,” Erdrich writes, are “creepy the way they want in / they want in us—inside us.” But the poem doesn’t rest here on its sarcastic portraiture and this macabre realization of ghoulish desire. Rather, it uses the dark humor of this critique as a prelude to a larger “How” question: “How can it hurt to let them in”? Anticipating the charge of unfair exclusion at its denial of this potent settler fantasy, “Fauxskins” jests—“Now I’m the colonizer—me!”— Erdrich shows exactly how “letting them in” can and does hurt. What’s appropriated isn’t just beadwork and smudge but also “the water protection and skirt shaming and de-colonizing and outrage.” Those “one-time visions” of Indian heroes? “It’s never a woman in those dreams,” Erdrich reflects, and “never a message to vote in tribal elections.” And if you “feel like an Indian,” the poem wants to know when—and also where:

Erdrich’s ire, moreover, is not reserved solely for buffoonish figures in “war paint and stoic pout” who remain ignorant of historical and contemporary realities of Native life—even though, as the opening line admits, “we laugh . . . we can’t help it.” The poem skewers another kind of “blood seeker”: those who traffic and trade “fauxskin” credentials in pursuit of professional profit and gain. Erdrich singles out “the [Wikipedia] list of Native Authors of Indigenous Descent / the publishers crowing / [and] the university of diversity.” These lines implicate those who embrace “authenticity” commodification, the cynical exploitation of self-identification (“Now they’re all . . . you know . . . Metis”), and the cheap reduction of “decolonization” to a trending academic buzzword, in the same acts of dispossession and theft that dismantle tribal sovereignty and “take what’s left / of what it means to be we.” On the contrary, Erdrich declares, “we decide who is we.”

Erdrich’s Author’s Notes mentions that many of the poems included in the collection were composed or revised during the 2019 polar vortex—a time when, as she writes, “I did not leave my drafty house in Minnesota for five solid days.” Reading and re-reading her work, my desire to locate an imprint of this experience—this imposed isolation—grew oddly stronger with each page. Perhaps this is what pandemic reading is now: a heightened awareness to such things. After months of quarantines and social distance, of sanitizer and anxious caution, of face masks and obscured smiles—after months of don’t touch your face!—how else, then, this autumn, would I read the opening lines of “Face to Face,” with their sharp longings and denied cravings, if not in such a context? 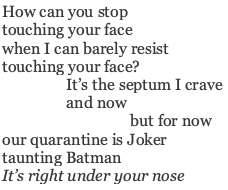 I find myself returning to several poems from Little Big Bully in such contemplative moments, but none more so than the antepenultimate “If I Give You a Last Lesson.” Drawing on the title’s conceit—“If we had just these moments / I would tell you”—the poem offers a series of “How to” statements that resonate with progressive intensity. The earlier lessons often center on questions of knowledge: “How to jump when an enemy / How to know which branch / which roof / which window.” Others, on desire: “How to yearn for blue shores / moments alone.” As the poem grows more urgent, however, and winds closer to its conclusion, the lessons become more difficult—and for that reason, as the collection teaches us, more necessary:

If this is the lesson we should take away from Erdrich’s work—not only how to live alone with our struggles but also how to testify to them with body and language and art—then it is a challenge as valuable as it is daunting. In these dark times, many have every reason to embrace despair. But in revealing her own abuse and in witnessing to the abuses of and in the world around her, Erdrich shares with readers the damage that one must sometimes endure. Little Big Bully is more than a healing of past wounds. Rather, it is remarkable precisely because it posits the act of speaking, of how you learn it is you say, as a liberatory practice: the difficult action that will project us—as well as these poems—into a different and less abusive future together. “Now,” Erdrich instructs, “watch me go.”