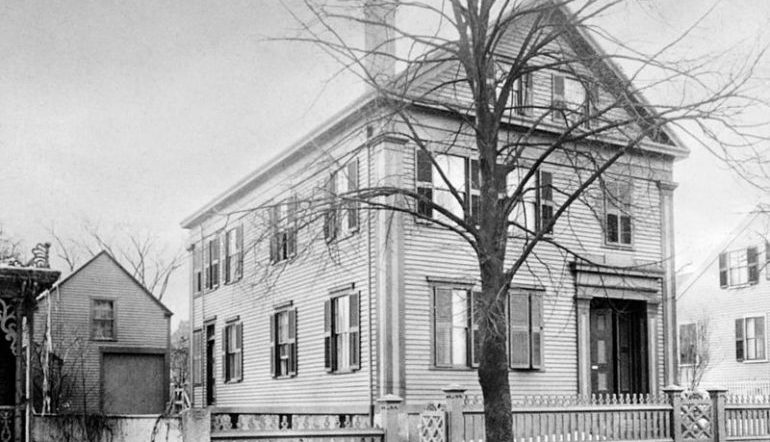 In 1892, Andrew and Abby Borden were murdered in their home in Fall River, Massachusetts. The prime suspect was Andrew’s daughter, Abby’s stepdaughter, Lizzie. The Fall River Axe Murders, and Lizzie along with them, have since been mythologized in a heady mix of rumor and conjecture; poisoned milk and madness-inducing menstrual cycles are but two of the incongruous details. Sarah Schmidt’s recently published See What I Have Done and Angela Carter’s “The Fall River Axe Murders,” the latter of which first appeared in the 1985 collection Black Venus, make the murders and Lizzie’s alleged accountability as their subject. Each work is unsettling, disturbing, and relentlessly visceral, and each is strangely sympathetic in imagining conditions that would drive “an unwed Sunday school teacher” to murder.

Whether factual or fictitious, every account of the Fall River Axe Murders makes much of the summer heat (though the rumor that this day in August was the hottest day on record has been dispelled). Schmidt tells us that “the little room was cloying and heavy with the odour of warm bodies,” and Carter writes simply that it was “hot, hot, hot.” In each rendering, the suffocating cruelty of hot weather in a poorly ventilated house evokes a primal panic.

Carter and Schmidt both also allude to the contemporary accoutrements of femininity, suggesting that to be a woman in such heat is doubly intolerable: not only is Lizzie confined indoors with few excuses to leave the house, she is also confined within layers of heavy, constricting clothing. Carter writes:

On this burning morning, when … Lizzie Borden will murder her parents, she will, on rising, don a simple cotton frock that, if worn by itself, might be right for the weather. But … a whalebone corset … takes her viscera in an unkind hand and squeezes them very tightly.

Carter also poses the added discomfort that menstruation entails—namely, that Lizzie is navigating the stultifying weather with “a heavy linen napkin strapped between her legs.”

There has been much fascination and conjecture around whether Lizzie was menstruating when the murders occurred, and its inclusion in Carter’s story takes straightforward pleasure in the gothic connotations—and hyperbolic fear—of a female body performing its secret, carnal functions.

Though Schmidt doesn’t focus on menstruation, her version of Lizzie is likewise equipped with an emphatically corporeal knowledge that sees her exude a subversive, sexual energy. It’s as though, irrespective of their root cause, her feelings are filtered through a sexual prism and emerge with a clear ring of sadism. Even her familial relationships occupy a troubling, fluctuating middle ground between sensual encounter and physical harm:

What touch can do. Fingers slid through grey hair and I stroked and stroked…. and I leaned even closer, smelled her skin, old moth wing and saliva, and I kissed her forehead, felt the tip of my front teeth press into skin and bone. Mrs. Borden moved underneath me….

“I’m feeling funny. I had such strange, awful dreams.”

Through these respective paradigms of pent-up hormonal activity and misdirected sexuality, Carter and Schmidt present Lizzie as a young woman who is barely hemmed in, who can hardly be contained within the confines of the sweltering house and feminine ideals of the period. Her expansion is countered by the fact that the house is simply too small to hold such a figure, and its cramped rooms and narrow halls see unnatural proximities occur: bodies continually overspill the boundaries of private space and etiquette, and Lizzie’s “room is harsh with the metallic smell of menstrual blood.” Unspooled as such, Lizzie’s body overlaps with the bodies of her family members in incestuous and cannibalistic ways. Shortly after she discovers her father’s corpse, for instance, we read: “I wiped my palm across my face, … noticed tiny droplets of blood sitting on my fingers. I put them to my nose then my mouth. I licked, tasted Father, tasted myself. I swallowed.”

The insinuation that Lizzie’s behavior is somatic begs a favorite question of the literary gothic: Was Lizzie driven mad, or was she mad to begin with? Carter tells us:

From puberty, she had been troubled by these curious lapses of consciousness that often came with her menses….

At those times, those irremediable times, she could have raised her muzzle to an aching moon and howled.

Schmidt also, through a broader range of biographical detail, presents Lizzie as physiologically unhinged: she’s unable to understand her family’s perspective when she is cruel, childish, or strange, nor, indeed, is she able to modify her behaviour toward her father once he becomes a corpse—“Father was there on the sofa. He hadn’t moved…. ‘You ought to stop with the tobacco, Father. It makes your skin smell old.’”

Though neither work is heavy-handed in posing why Lizzie is the way she is, alongside these visceral descriptions hovers the figure of Mr. Borden: short-tempered and despotic, drunk on his role of patriarch. Both Carter and Schmidt detail the tension with which he fills the house and how it impacts his daughter. Carter focuses on Mr. Borden’s “imported Protestant ethic” and the preternatural miserliness which causes him “at night, to save the kerosene,” to sit “in lampless dark,” while Schmidt writes: “Father cut meat like a lumberjack, whomped a large piece of mutton into his mouth. The house was silent. Father didn’t say another word to me that day. I began thinking things.”

Discussing See What I Have Done in the New York Times, Patrick McGrath writes that “Lizzie Borden is a woman very much under the iron hand of an often bitter, joyless man who has, in addition, just killed all her pet pigeons with a hatchet.” Even with the pigeons in mind, this seems a somewhat sanitary reading of the thick, silted oppression through which Lizzie wades.

In short, while Andrew Borden may not be the sole cause of Lizzie’s behaviour, he is certainly an exacerbating factor, passively and relentlessly meting out patriarchal horrors. It seems, in each text, that the damage these horrors have caused has become especially visible after the onset of Lizzie’s adolescence, with her body beginning to behave differently and the scope of her desires beginning to expand.

In neither work do we see the actual crimes take place, but Carter states outright that Lizzie will kill Mr. and Mrs. Borden, and Schmidt includes passages strongly suggestive of Lizzie’s guilt. And yet, while we are certain (at least in these fictitious contexts) of Lizzie’s guilt, it is impossible to dispense with empathy, let alone sympathy.

What is it that allows this concurrent conviction of guilt and a hesitancy to condemn Lizzie entirely? Is it the childlike lack of self-awareness and an unwavering, albeit perverse, innocence? Is it the unapologetic rendering of Andrew Borden’s controlling ways? Or is the answer more subtly, more simply and insidiously, that the reader readily recognizes these suffocating conditions in their own flesh? Is it that we can intuit how Lizzie, forced to live in such a house, consigned to spinsterhood and its trappings, would one day—perhaps especially fatigued by a hurting womb and almost certainly dizzy with the summer heat—suddenly recognize her entrapment as intolerable and look about her for a weapon?