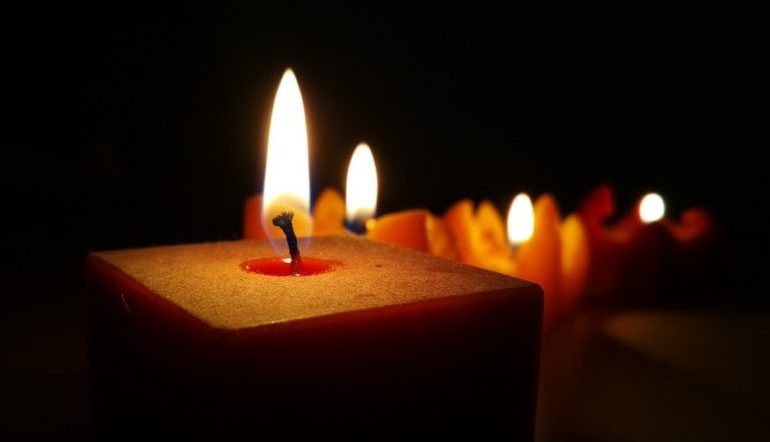 One very early morning, during an especially harrowing walk through icy winds and freezing puddles on the road from Auschwitz to a work site, prisoner Viktor Frankl lost himself in thoughts of his wife. From that point on, whenever he sensed himself inching toward despair—when his feet, swollen with edema, hurt too badly, when he was beaten to the ground by a Capo for no apparent reason, or when he grew dizzy with hunger—he initiated a conversation with her in his mind. As the image of his wife carried him through his suffering, he admitted, “I didn’t even know if she were still alive. I knew only one thing—which I have learned well by now: Love goes very far beyond the physical person of the beloved. It finds its deepest meaning in his spiritual being, his inner self. Whether or not he is actually present, whether or not he is still alive at all, ceases somehow to be of importance.”

I read Viktor Frankl’s testimony, Man’s Search for Meaning, this month as a way to mark Israeli Holocaust Remembrance Day, which took place on April 11. As I took in—eyes torn, shivering, transfixed—Frankl’s account of his own tragedy, voices from another book I’d read this month echoed through my mind.

In Four Fathers, a new Israeli novel by Amir Ziv, trauma and the image of a loved one create a very different trajectory. The discovery of an extramarital affair and the subsequent death of the unfaithful wife drive a hurting husband—and everyone around him—into a spiral of violence, estrangement, and brutal callousness. Told in four parts using different narrative styles, the book delivers the interconnected perspectives of the husband, the daughter, the lover, and the watchful neighbor to examine how the conflicting and absurd narratives of a life can leave people unhinged, grasping for meaning, and turning to violence. Whereas Frankl and his fellow prisoners sought personal meaning in order to survive, the protagonists of Four Fathers lose touch with their lives, question the very concept of “meaning,” and ultimately find their paths in the rejection of personal relationships.

Reading these books side by side brings up questions not only of culpability, but also of capability. The differences between the characters are clear: Frankl and his very real counterparts are victims; Amir Ziv’s fictional men are victimizers. The prisoners of Auschwitz linger on in the memories of their loved ones, foregoing desire as an element no longer present in their lives; the four fathers (as well as the one mother) give in to lust, revenge, and the urge to destroy all obstacles in one’s genetic path. Man’s Search for Meaning is the true story of the two, and although it recounts the senseless suffering and atrocity of the Holocaust, it is by far the gentler, more hopeful and humane handling of trauma among these two books. Walking tight down the line between fatalism and free will, Frankl defines the last of the human freedoms, that which cannot be taken from a person, as the ability “to choose one’s attitude in any given set of circumstances, to choose one’s own way.” For Frankl, finding meaning in one’s life is not only a method of survival through suffering—it is an honorable survival that gives meaning to the suffering itself, leaving its victims wounded, weak, but not lost.

Frankl’s insistence on finding meaning and logic in one of the most irrational, absurd, and inexplicable horrors of human history is admirable, awe-inspiring, at times difficult to believe, and even infuriating. I want to shake him and tell him, “You’ve been through enough! There’s no need for you now to provide a reason for it, on top of everything else.”

Nevertheless, he persists. While Nira, the young protagonist of Four Fathers—a girl rejected by her biological father and endangered by the father who raised her—questions the morality of the men surrounding her, taking them to task for not making kinder and less selfish choices, thus leading her into a life of institutionalized unhappiness, Frankl makes no such judgments of the people who complain or react negatively to circumstances much more fortunate than his own. “A man’s suffering,” he argues, “is similar to the behavior of gas. If a certain quantity of gas is pumped into an empty chamber, it will fill the chamber completely and evenly, no matter how big the chamber. Thus suffering completely fills the human soul and conscious mind, no matter whether the suffering is great or little.”

Shockingly, it is easier for me to accept Nira and her dysfunctional parents’ nihilistic frames of mind, the throwing up of their hands, than Frankl’s acceptance of fate and readiness to keep fighting the good fight. I have long found solace in the notion that there is no specific meaning to life, nothing to exhaust oneself seeking out, and that our time on earth would be better spent being kind and serving as a positive force in the world, enjoying our family, friends, and community. When people are all you’ve got, you cling to them. But when people hurt too much, ridding yourself of them might seem essential to survival. A father refusing to meet his biological daughter, raised by another man, may be acting more out of self-preservation than lack of interest. A man attempting to kill himself and his daughter (whom he has just found is not really his) might think, in a moment of madness, that elimination of all of their existences is the only right way. An act of mercy.

In the third part of Four Fathers, Nira attempts to do just that. She prods and pokes holes and questions the men who have formed and molded and destroyed her life in a pursuit of reason, significance, and grace, recording her findings in blog form. When she finds none, she can do nothing more than what many of Frankl’s fellow prisoners did. She gives up on it all. She lets go of her own humanity.

But in a certain way, Frankl and Ziv seem to come to the same conclusion: Life does not have one set meaning, but could have any number of meanings, the nature of which depends on the person living it. For the prisoners of the camps, suffering through till the indefinite end of the war became the very meaning. “There was plenty of suffering for us to get through,” he writes. As Nira investigates her stolen childhood, she makes it her goal to discover, decipher, and document every step on her way of sorrow, finally choosing oblivion over hope. Suffering, she decides, in the words of Frankl, had become a task on which she did not want to turn her back.