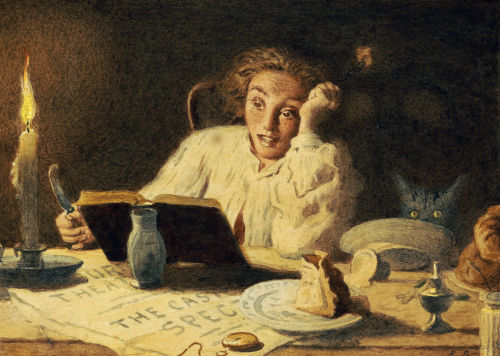 Sometimes the things we remember most from childhood are the things that scared us. There is something everlasting about the visceral fears of childhood. However, it took a lot to scare me as a child. Even from a young age, I had a keen love of ghost stories and horror. I collected ghost story anthologies with the glee that other children collected toy race cars or Barbie dolls. There were, though, a few stories that sent me into dread-filled terror.

One of these was MR James’ “Lost Hearts,” which I first read in an illustrated collection of “children’s” ghost stories (I put quotes around children’s because looking back I am filled with amusement at some of the gruesome stories that found their ways into this collection). It seems fitting that a James story made such a profound impact on me, as a child, since later in my life he has become one of my key touchstones when I write horror myself.

James is, among many things, one of the finest ghost story writers of all time. His ability to slowly raise dread and create truly horrific depictions in a few pages is, for the most part, unrivaled. When I lecture about horror, which I’m wont to do in front of classrooms, I usually make the argument that there are essentially two ways to make truly effective horror: through dread and through awe. Awe-based horror is the essential feeling of something otherworldly or “wrong.” Dread-based horror is, just as it sounds, the slow building of tension that creates a mounting feeling of dread or terror. Most good horror, in my opinion, does one or the other of these (if not, sometimes, both). James often managed to convey both of these kind of horrors.

The story “Lost Hearts” is by no means James’ best story. Looking back on it, with adult eyes, it’s one of his more rushed and flawed pieces. However, it does convey dread, especially dread to a child, in an extremely effective manner. 12-year old Stephen is the main character (though the narrator is one of James’ unnamed down-the line narrators who heard the story directly from the source. A tactic he used often) and he is the reason the story is so unsettling. A child protagonist, especially an orphaned one, reminds the reader of the fairy tales of youth: the children wandering towards the gingerbread house, the old woman offering an apple to a hungry girl.

Stephen is an orphan taken in by a kindly older cousin who seems delighted to invite him in. This kindness is the first note of the unsettling: shouldn’t we be able to trust those adults who act with kindness? The second is the housekeeper who befriends Stephen and tells him of two previous children who the kind cousin took in. This story is dropped into conversation and, on the surface, is a way to make Stephen feel safe—evidence of previous kindness. The reader, though, will right away see this as a red flag. Why are the children no longer around?

One night Stephen sees a ghastly apparition: a child sized figure, pale of skin, holding a hand over their chest while moaning. Scratches appear on a partition—where no rat could have reached. The child-sized apparition reinforces the dread we’ve been feeling: this is not a story where children are safe. This won’t be a fairy tale with a happy ending.

In just under eight pages (depending, I suppose, on what book you are reading from), James creates an atmosphere of dread—one where we know because of the narrator, Stephen will survive—that feels unsustainable. Readers know, in fact, dread that something utterly horrific will happen (and, indeed, it does).

Rereading the story, in order to write this piece, I could see the flaws in it much more clearly. Despite that, I also could remember that original fear I felt as a child. There was something thrilling about the building of dread in the story that brought me as young reader closer and closer to that inevitable act of terror. In some ways, that’s what all good horror (and, in fairness, all good fairy tales also should do) should do: remind us that there is something to fear out there, but that for now, in the safety of our rooms, it is being kept at bay by the closing of our books.