Home
»
Reading
»
Lost in Translation: A Journey on the Li River 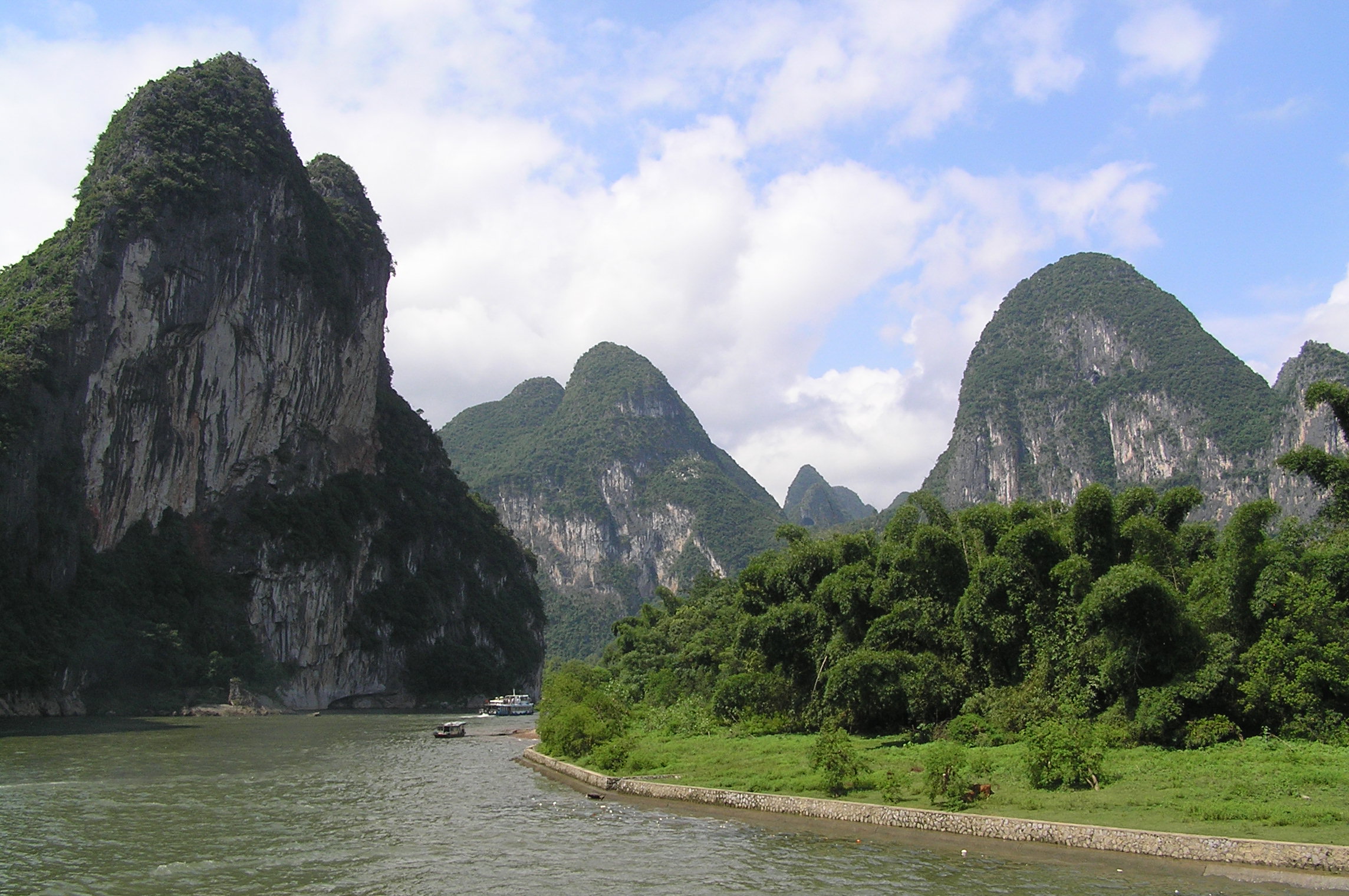 My China-born daughter is thirteen the summer day we take a cruise down the Lijiang River from Guilin to Yangshao. This stretch is said to be the inspiration for much Chinese poetry and art:

“Guilin’s unique topography. and beautiful scenery of the Karst Mountains and the unsurpassed beauty of the Li River has attracted public figures including poets and artists since centuries.”

Our brochure compares the river to a “jade ribbon winding among thousands of grotesque peaks.” Or, as the Tang Dynasty poet Han Yu put it,

Although I find many references in tourist brochures to this location as a popular setting and inspiration for Chinese literature, I have difficulty finding many such works that have been translated into English. Mostly what I find are fragments, many, like the ones about the “grotesque” peaks and “erect” hills, in which it feels like something has been lost in translation.

However, American writers have also been inspired by this river: according to blogger Wai Chee, writers Toni Morrison, Maxine Hong Kingston, and Leslie Marmon Silko took a boat up the Li in 1985. The influence of that trip lingers in some of their work such as Kingston’s 2012 memoir I Love a Broad Margin in My Life which is “laid out like a Chinese scroll, with no beginning, middle, or end” and which, according to a customer review, “meanders like a river.” Silko was fascinated by the connections between Chinese pottery and examples from her own Laguna ancestral background; her 2011 memoir The Turquoise Ledge focuses on family history, Tucson, and desert landscapes.

Much as I’d like to contemplate stray lines from Chinese poets and the work of American writers who’ve followed this same journey, I’m too distracted by my restless daughter. Beside me, forehead slick in the tropical heat, she wears her bangs bobby-pinned back, hair impatiently forced into a scrunchie ponytail. Jade hairpins and hair ribbons, whether blue, green, silk, or satin, would be much too fancy for her taste.

For three and a half hours, we cruise along, watching the “spectacular landscapism and elegant hills, the towering peaks, the variegated cliffs and odd-shaped crags” shaped like a cat’s face with little ears, like an apple, like a snail. We pass the Hill of Nine Horses. An online article describes it as

endowed by nature’s uncanny workmanship, with a smooth flat surface. Seen from a distant boat, due to the interplay of various shades of brilliant colors upon it, the surface looked as if painted with a picture of faintly discernable nine horses. On the crest of the peak, poised a colossal ‘steed,’ rearing its head and neighing, while by its side two ‘colts’ were grazing. One can see ‘the avant-garde Horse’ on the summit of Yuwei Peak and ‘The Horse Falling Behind’ on Mahuang Mountain.

But I’m disappointed. I can only make out two of the horses and what looks like a piggybank.

He who travels in Guilin hills finds himself in a fairyland,

He who sails along the Li River finds himself boating in a sweet dream,

We aren’t quite feeling in a fairyland or a sweet dream. My daughter is mad because she can’t see the horses, either. She can’t even see the piggybank.

My daughter is restless. This cruise is taking too long. When she complains that she can’t see the horses, I feel bad, like I’ve somehow passed on my own bad vision even though she doesn’t share my genes. Usually she laughs at my blindness, assured that she’ll recognize what I don’t. She thinks she can see things coming.

But she doesn’t see the horses, so maybe I know a thing or two, after all, and I see things coming now, too fast, which of course sounds crazy because this cruise is moving slowly and she can hardly wait to get off the ship. She pulls out her scrunchie, casually sweeps up her hair and lets it fall, gathers it back into a ponytail again. It’s almost a coquettish gesture; she almost looks grown up, except that she is wholly unself-conscious, taking for granted her own casual elegance.

We glide by the scene on a 20-yuan note and bamboo growing along the water that looks like a peacock’s tail. She says she can’t see this either, and I wonder if she has ever seen a peacock (“Duh, mom,” she says later. “Of course I’ve seen a peacock.”) We float past water buffalo and cormorants and bamboo rafts, no longer made of bamboo, but PVC pipe, and farmland now rented out for cell phone towers. China changes before our eyes, my daughter changes before mine.

Later, searching for the Li River in literature, I will learn that writers have compared this waterway to a “one hundred miles art gallery” or a “melodious symphony.” It’s “God-dotted landscape,” says another:

’Serenity’ is a word poet tried to describe, ‘story-book-mountains’ is kids say about the hills. Chinese traditional paintings are what Chinese artists have been trying to depict the scenery for thousands of years.

I wish I could capture that sense of serenity as we float along, here at the starting line of my daughter’s teenage years and all that will be lost in translation between us, her still unaware at how fast she is heading toward the brink of womanhood. Uneasily, we cruise down the river, and the grotesque peaks erect before us.