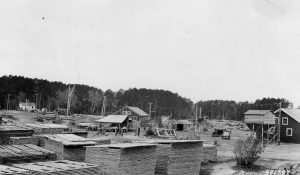 Main Street holds an unusual place in my bookish heart: it is one of those novels that I love, but rarely recommend. It is dull. But listen—its dullness is part of its charm. As its title suggests, it is a novel about dullness, about being trapped, about a woman—the educated progressive Carol Kennicott—whose ambitions are suffocated by the middlebrow small town to which she moves with her husband, a doctor. It is the audacious story of how her arrogance gets in her way; more audaciously, it asks whether her arrogance, in the face of the sheer small-minded bigotry she encounters in Gopher Prairie, Minnesota, is not completely unwarranted.

Nearly a century later, Sinclair Lewis’s 1920 novel Main Street remains a vital reminder of the long road every social reformer has to walk, especially in a community where they know everyone. It is a testament to how every step of social progress is derided as deluded and impossible until it is commonplace.

Fittingly, Main Street is a long, meandering novel. The number of “steps forward” vs “steps back” that Carol takes in the decade or more Main Street narrates doesn’t fit a tidy pattern. If you are looking for a gripping tale of progress, you may be dissatisfied. Ditto if you want a feel-good story that reaffirms a belief in the inherent good of all people. But as a realistic illustration of one woman’s relentless efforts to change her town, whether she’s stymied by wealthy landowners or her own aloofness, Main Street is a genuine work of art.

Aside from the novel’s emotional exactness, one passage has stuck with me since my first reading. In an early chapter, Carol and her husband are invited to a dinner party at the home of a local store owner, Sam Clark. Sam is low in the social hierarchy of Gopher Prairie, but he’s a property owner, and he invests in his status, predictably, by hosting and flattering the town’s other businessmen—particularly his superiors, such as the president of the bank. As the party gets underway, Carol naively inflames a political debate by asking everyone present about labor organizing and profit sharing. Here is the response of Mr. Elder, the owner of a planing mill:

All this profit-sharing and welfare work and insurance and old-age pension is simply poppycock. Enfeebles a workman’s independence—and wastes a lot of honest profit. The half-baked thinker that isn’t dry behind the ears yet, and these suffragettes and God knows what all buttinskis there are that are trying to tell a business man how to run his business, and some of these college professors are just about as bad, the whole kit and bilin’ of ‘em are nothing in God’s world but socialism in disguise! And it’s my bounden duty as a producer to resist every attack on the integrity of American industry to the last ditch. Yes—SIR!

It’s not clear what Mr. Elder is specifically referencing—in fact, there’s not much in existence he can reference. He’s railing against the push for social programs generally. When Lewis wrote this novel, in the late 1910s, worker’s compensation and disability insurance programs were implemented piecemeal in some states, or some industries, and not others; social security was still 15 years away. The first public welfare department in the country (in Kansas) was less than a decade old. Sociologists and labor organizers had advocated for profit sharing at least since the 19th century, but it was never standardized (ironically, Henry Ford introduced it in his plants as a means to quell calls for union organizing). Suffrage for white women was ratified in 1920, but the scene in question takes place several years prior. Mr. Elder is raving indiscriminately against an entire worldview; his screed is still imminently recognizable.

But the particulars matter. It’s difficult to read this scene in the 21st century without a satirical cast: several of the reforms Mr. Elder disparages are now seen as perfectly sensible, even by political conservatives. Others are still pipe dreams. But it’s the duty of the modern reader to re-imagine the social and political context Lewis was critiquing. Most significantly, it’s the duty of the modern activist to recognize the sheer arbitrariness of which of these “radical” reforms became embedded into our political economy, and which didn’t. Roosevelt attempted a nationalized health system in the 1930s; Truman attempted the same in the 1940s. There’s no reason that profit sharing didn’t become the law of the land, and social security did, other than that the vicissitudes of American history played out one particular way and not another. The passage is proof that all of our hopes are equally unlikely until the moment that they are not.

What elevates Main Street from propaganda to a fully realized piece of literature is its hyperfocus on Carol’s inner life. This is a novel about how it feels to fail, how it feels to abandon your life’s work, how it feels to return to the site of your failure and try, because you have no other choice, again. Carol is accused of hypocrisy—how liberal can she be, if she looks down on a middle class who were doing just fine before she arrived? She stares down this guilt and continues challenging the reigning social order, over and over. More than its history lesson, it is the description of Carol’s endurance (and, ultimately, her refusal to be ashamed) that is its deepest source of encouragement. Carol’s final line of dialogue is her most famous: “I may not have fought the good fight, but I have kept the faith.” But I also remember this one, as she watches her infant daughter—“If you tories were wise, you wouldn’t arrest anarchists; you’d arrest all these children while they’re asleep in their cribs. Think what that baby will see and meddle with before she dies in the year 2000!”