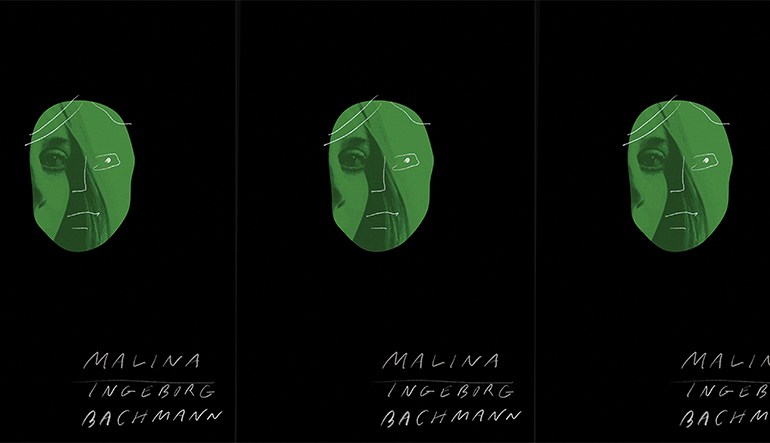 Toward the end of her life, the Austrian poet Ingeborg Bachmann began work on the first in a trilogy of novels before her untimely death—addicted to painkillers, her arms spotted with mottled burns where her cigarettes had lain carelessly on unfeeling skin, Bachmann died in 1973 after a fire erupted in her bedroom. Malina, her only completed novel, has maintained a high critical reputation in Europe since its publication, but hasn’t captured the attention of critics stateside, unlike the works of Thomas Bernhard, Bachmann’s contemporary. It’s not difficult to see why.

The plot of Malina, out next week by New Directions, is impossible to follow; it exists only in the form of a wavering procession of scenes in the nameless narrator’s mind. Instead, appreciating Malina requires abandoning yourself to Bachmann’s darkly ponderous prose, which creeps and flows like magma, enfolding and swallowing up the bric-a-brac of reality—street names, childhood memories, momentary meetings. The text is labyrinthine, wandering, abstract; reading it feels  like stumbling through the ramifying hallways of an abandoned castle with interminable galleries and courtyards stuffed with decaying statuary.

At its core, the book is the story of a love triangle between the narrator; her young Hungarian paramour, Ivan; and the older, more cerebral Malina, an academic working in an unspecified museum. Physically frail and wracked with emotional hunger, the narrator craves Ivan’s exuberant affection, and believes his presence might cure her neurasthenia. Malina, conversely, is detached, “dispassionate,” and “belongs to that rare breed of men who have neither friend nor foe, without being self-sufficient.” He offers a sympathetic mind, a knowledge of the narrator’s dark depths. The contrast between the gregarious, spry Ivan and the somber, introverted Malina powers the text.

In some ways, Malina’s narrator resembles one of Poe’s gloomy and fundamentally uncertain protagonists, torn between a realistic and supernatural explanation for the story’s events. Anxiety dashes off its dark, recursive question marks, as the narrator perpetually interrogates herself, demanding to know whether her feelings are justified by her circumstances or simply the product of nerves, the rawness of her psyche. This uncertainty bleeds outward, extending even to language itself.  Aphasia sweeps through the narrator’s long sentences, leaving behind a cindery, pale, depleted script.

Part of Bachmann’s larger literary project entailed rooting out the strains of fascism that remained in the postwar relations between the sexes. Slung between Ivan and Malina—two archetypes of the male mind—the narrator becomes a model of this lemma, struggling to carve out a space for herself using language; her dense, agitated, anxious sentences have the air of exorcisms, of pummeling attempts to solidify and heal the self.

Communication in the book is broken and elliptical, trailing off into silence. When the narrator is interviewed by a newspaper writer, the questions he asks her are absent, while the phone conversations that intersperse the text are truncated, rife with scissions, and seem never to reach closure. Even the acts of reading and writing are beset by this erosion, with the narrator speaking of print as an “inhuman fixing” and “this insanity, which flows from people and is frozen into expression.” Flouting this failure of language, however, is the city itself. The book is overloaded with the impedimenta of place, specifically Vienna and its environs.

The play of memory is strange here. Its failings aren’t haunting, as they might be in the prose of a writer like W.G. Sebald, but instead are accepted naturally, with both false and true memories contributing to the plashing cascade of thought. Throughout the book, the narrator picks things up and drops them so lightly, so quickly—slipping seamlessly between phone calls, letters, a dramatis personae, and a fable written by the narrator which jams itself into the text and runs for ten pages—that Malina often has the feel of a frantic pastiche. The world of Malina is a world without cohesion, devoid of summation; its narrator longs for the absent dream of le monde vécu, a world that subjects might experience together.

In addition to the physical presence of the city, the failure of language is also belied by Bachmann’s nimble mastery of styles. At the merest flick of the authorial reins, her shapeshifting prose is capable of adopting the comic hyper-complaint of Bernhard, the noirish atmospherics of a Raymond Chandler novel, and the rollicking syntax of a Grassian character study—the latter of which Bachmann uses to analyze the character Kranewitzer, a mailman who one day simply stops delivering the mail. The narrator’s treatment of Kranewitzer, who’s perfectly equipped to be exquisitely tortured by his own actions, is a touching blend of the melancholy and the comic: “[F]aced with the postal mountain growing in his apartment, he must have suffered indescribable pangs of conscience, inconceivable to others, to whom a letter is just a letter and printed matter merely printed matter.”

Malina is, in essence, an agonizing assertion of being, a victory over the forces that conspire to shroud one in silence. As slippery and senseless as language can sometimes be, the book asserts, it’s still the best way of pinioning oneself to the world. When the narrator contemplates purchasing an old bulky desk from an antique shop, her reasoning—“because then I could write something on some old, durable parchment, such as can no longer be found, with a genuine quill pen, such as can no longer be found, with some ink such as no longer is manufactured”— reveals an essential faith in expression. The density of the desk, its stability, is a dream-image of writing, a symbol of writing’s ability to solidify the world and the self, to lend to our transient bodies and thoughts the fragile weight of permanence.