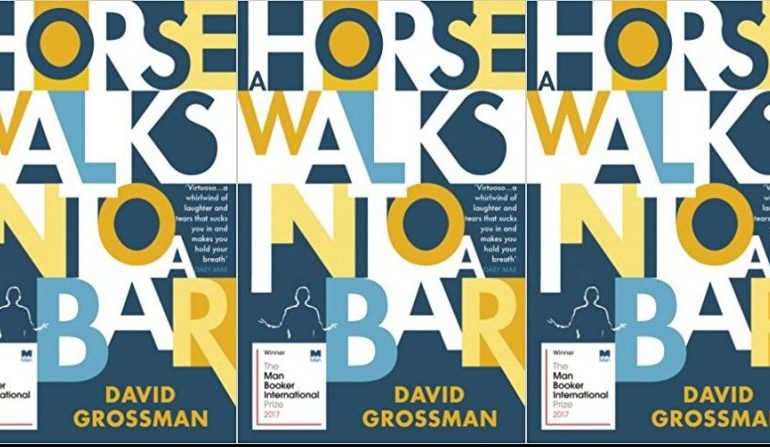 In David Grossman’s award-winning novel A Horse Walks into a Bar, the narrator, a retired judge, describes one night in the life of the protagonist, Dovaleh, a stand-up comedian in his late fifties and his lost childhood friend. On this particular night, in a smoky comedy club in a peripheral Israeli city, the narrator has come at the protagonist’s behest not just to watch him perform, but to look at him—really look at him—and tell the comedian what he sees.

When asked if he is wishing to be sentenced, the comedian replies with a startled no. He only wants the judge to tell him what that unique quality is, that something as-of-yet undefined he emanates, which is truly and utterly his own.

But as the night veers further away from any typical definition of comedy, it becomes obvious that identifying a person’s singular quality is always a sentencing, or a diagnosis. As the jokes grow fewer and farther between, Dovaleh reveals more intimate details about his life, unraveling the story of his childhood and youth. Some members of the audience buckle and protest. Others lean in, mesmerized. His dual role as the protector and saboteur of his parents’ hearts leaves his narrator, his audience, and the readers wondering: what is the most defining quality of this man? Is he mostly good or mostly bad? What is his bottom line?

The writing flies off the page, almost forcing the reader to rush ahead, not allowing for any pauses to catch one’s breath. The voices of Grossman and of his translator, Jessica Cohen (who is shortlisted for the PEN Translation Prize, and with whom he has shared the Man Booker Award) merge together to create a roller coaster of shame, pain, and dark memories. I was swept up in it. I felt like I was there.

And I was there. The book has been adapted into an Israeli play that is now touring the world. I was lucky enough to attend one of the shows, to sit in a small theater designed to resemble a derelict comedy club, where I got to act out the role of the fictional audience, sitting among some of the other actors and watching the lead actor crash and burn on stage. Much like the style of the book, the acting was fast, breathtaking, sweeping the audience between laughter and tears so frequently that we ended up breathless. We later learned that the original director had died unexpectedly three weeks into rehearsals, and that the lead actor—the irresistible Dror Keren—had taken over in his wake. Grossman himself had been intimately involved in the production, offering his assistance at all hours of the day and night.

The experience of being put to trial before a jury of unsuspecting civilians, judged by an impartial friend who has witnessed our past traumas, of revealing the rawest, most tender aspects of our being only to be reduced to a title, seems like something most of us would try to avoid at all costs. But the truth is, we put ourselves through it every day. On social media, we attempt to create a curated version of ourselves, a preconceived concept of what we think we are, or ought to be, or what others expect of us. I’ve been on Facebook for years but only recently joined Instagram. As soon as I began exploring my newest app, I began to subconsciously design my virtual persona. What kind of Instagram life would I have? Would my photos show me as a devoted mother? An eccentric writer? A slightly-out-of-shape translator? Or should I just upload whatever comes to mind and let my followers develop their own ideas about me? Would they judge me favorably if I failed to show them “the good stuff”?

Unlike the beautifully filtered world of social media, in which we aspire to formulate a cleaned up and cheerful version of our lives, posting only the happy (or at least the funny) moments, Dovaleh the comedian is adamant about sharing his darkest, ugliest side with his audience—his jury. When a member of the audience testifies in his favor, he loses his footing and urges her to leave along with those patrons who have lost their patience for his bizarre act. He has no interest in a character witness or extenuating circumstances. The filter he chose is “ugly truth” and he will not let himself get away with anything more aesthetically pleasing.

As I’ve mentioned, many members of the audience cannot stand it, leaving halfway through, sometimes even asking for their money back. But among those who stay, aversion is, with time, replaced with affection, alienation with empathy. The fictional audience (in both the book and the play) condemn the accused man for excusable behaviors and pardon his unforgivable actions. In the end, they cannot help but love him. More than that, they cannot help but justify his actions and share in his blame. In social media, the experience of such judgment has proved quite different. The fates of people and corporations can be quickly sealed by the sentencing of their Facebook, Instagram, or Twitter followers. Whether these judgments are justified or not, they are almost always hasty, all often lacking an aspect of introspection. The sentencing of another is too pleasurable and vindicating for the risk of testing ourselves for the same crimes and misdemeanors.

But comedy has a gift. Those experiencing it cannot help but feel condemned themselves. Comedy reveals that which is ugly and shameful in all of us, the comedian taking the fall for the public at large while pointing the spotlight to our shared atrocities. Those reading or watching A Horse Walks into a Bar find themselves thinking about their own traumas, their own coping mechanisms, and the pain they subsequently inflicted upon others. If we come to the club, or the theater, or our reading nook, with an open mind and heart, we can pay true attention to what they are revealing to us, in us. We can begin to change. If only the same thing happened to us before the screen.