Home
»
Critical Essays
»
Marcus Wicker and the Poetics of Scrolling 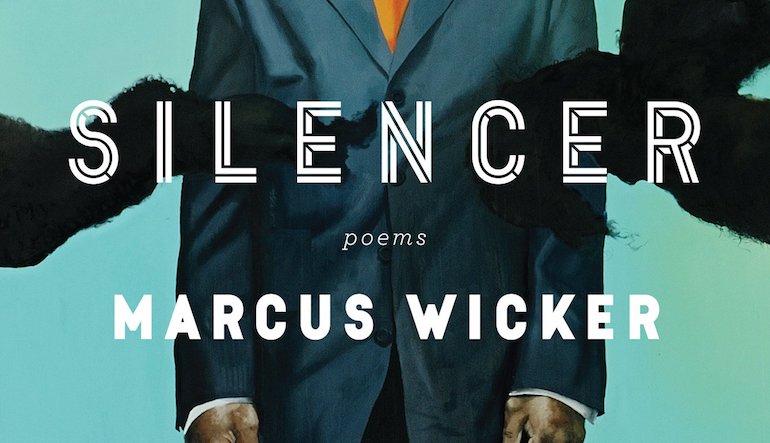 Anyone who spends time on a newsfeed-format social media platform knows how it feels: you scroll through the entries, skimming past some items and reading others, catching headlines and choosing whether or not to click through and read a full-length piece of writing (as you, reader, may have stumbled upon this very post). How does the act of “scrolling” through social media platforms affect our experience of time and narrative structures? What does it mean for how we participate in our cultures and engage with our own identities?

Conversations surrounding this phenomenon—that is, the pervasive addiction to sifting through a Facebook newsfeed, Twitter timeline, Tumblr dashboard, and so on—tend to center on the notion of the reduced attention span. Marcus Wicker, in his new poetry collection, Silencer, introduces a different approach to how we can think about the social media scroll as it relates to the experience of the self.

In “Ode to Browsing the Web,” Wicker thoughtfully portrays the simultaneous passivity and agency that’s involved in the act of scrolling through social media. The reader remains in control of that ongoing downward motion, while also relinquishing control over what comes next. The nature of the scroll requires diving into the content that emerges from the bottom of the screen without the ability to consider different paths. At the same time, there’s this undercurrent of another duality—the act of scrolling is both distantly impersonal and intimately personal at the same time. Wicker writes:

My loneliness exists
in every afterthought. Yesterday, I watched
a neighbor braid intricate waves of cornrows
into her son’s tiny head & could have lived
in her focus-wrinkled brow for a living. Today
I think I practice the religion of blinking too much.

The intense loneliness of scrolling comes into contrast with the intense closeness of watching the neighbor braid her son’s cornrows. The imagery of the cornrows is also particularly important here because “browsing the web” can be a way of participating in one’s own culture—or, to take Wicker’s words literally, even inhabiting that culture (“could have lived / in her focus-wrinkled brow for a living”). That level of intimacy in simply watching a video reinforces this duality of closeness and distance that permeates social media. It’s notable that “I watched / a neighbor” never explicitly states that he watched the neighbor in a video, only that he watched. The uncertain sense of distance never fully dissipates; even loneliness itself is experienced indirectly, existing “in every afterthought” rather than in primary, concrete thoughts.

Alongside these dualities and ambiguities, Wicker is also working with a particular paradox of blackness in America—an experience characterized by both invisibility and hypervisibility. Especially since ongoing discourse often centers the inappropriate adoption of black hairstyles, the cornrows in the lines highlighted above present a palpable example of hypervisible racial difference. In “Don’t Cash Crop on My Cornrows,” which went viral in 2015, Amandla Stenberg emphasizes how cornrows developed as a “functional way to keep black hair unknotted and neat, but with style” and explains how white appropriation of that style amounts to a kind of erasure rather than an amplification. Wicker brings out the nuance of this cultural moment by focusing on the process of the braiding itself—its corporeal intimacy—instead of the final product of the visible hairstyle.

It’s no mistake that the poem directly after “Ode to Browsing the Web” in the collection pivots to another intersection of black identity and the web: the all-too-common viral video depicting violence against people of color, usually black men. In “Stumped Speech on the Internet,” Wicker writes:

You could sleep-click the wrong link & wander down
the deep hole of your ultimate undoing, see
something you can’t unsee. Like a rainbow
coalition of cops doing calisthenics around
a six-foot, three-hundred-fifty-pound-man,
choked back into the earth […] & if you, too,
happen to be a Cancer, you know
that’s the kind of thing that could run one
into hiding, maybe keep you from being OK.

In these lines, the phenomenon of the viral police brutality video—an unavoidable aspect of “the scroll” in nearly every platform—comes to the forefront of the experience.

Wicker’s voice in this passage highlights the immense vulnerability associated with this manner of consuming stories, where any single click could lead to “the deep hole of your ultimate undoing.” The way he invokes zodiac sign identity, while cheeky on the surface, nods to the arbitrary nature of it all, the role of chance, and the way that social constructions of difference can sometimes feel so senseless.

People share these videos to produce public outrage as an impetus for real change, but Wicker is focusing in this poem on the trauma that spreading these images can inflict upon black people who are repeatedly confronted with them. Due to the nature of the scroll, nobody can refuse to look, even out of self-protection. In a New York Times Op-Ed titled“Police Violence: American Epidemic, American Consent,” Charles Blow refers to these viral images more bluntly as “the pornography of black death, pain and anguish […] exploited for visual sensation.” While supposedly in the service of raising awareness, this “pornography” can amplify the trauma of police brutality—“the kind of thing that could run one / into hiding, maybe keep you from being OK.”

The final lines of “Ode to Browsing the Web” read:

O world
wide web, o viral video, o god of excrement
thought. Befriend me. Be fucking infectious.
Move my eyes from one sight to the next.

In these lines, the speaker is always the object of the verb, never the subject: befriend me, move my eyes. Who is the agent of these verbs? That “god of excrement / thought,” the internet, the force that increasingly forms our daily narratives and determines which stories become visible.