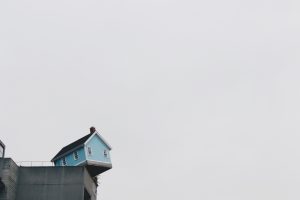 Each suburban wife struggles with it alone. As she made the beds, shopped for groceries, matched slipcover material, ate peanut butter sandwiches with her children, chauffeured Cub Scouts and Brownies, lay beside her husband at night- she was afraid to ask even of herself the silent question—‘Is this all?

Nineteen years after Betty Friedan wrote Feminine Mystique, Rachel Ingalls published Mrs Caliban, a subversive fairy tale that just so happens to serve as a perfect allegory for the “woman problem” as conceptualized by second-wave feminism. In Mrs. Caliban, Ingalls uses the literal imprisonment and physical degradation of a sea creature from the deep to illustrate the dehumanization of women in the confines of the institution of marriage. According to the novel, marriage for a woman is a repetitive cycle of mundanities, a constant stream of mind-numbing domestic chores, and ultimately, a means of tamping down women’s humanity.

Mrs. Caliban opens with Dorothy, a housewife in a loveless, toxic marriage. Fred, her feckless husband, is consistently unfaithful, inattentive to her emotions, and occasionally physically abusive when he needs to “calm her down.” After the deaths of their son, their unborn child, and their dog, the affection has been sapped out of their marriage so it’s characterized entirely by day-to-day rituals: Dorothy ensures Fred remembers to take an umbrella to work, cooks, makes the beds, vacuums, washes the dishes, and listens to the radio. The tedium of her housework gives Dorothy’s life a feeling of unreality, to the point that she starts hallucinating personalized messages on the radio that reassure her she hasn’t completely failed as a woman: “Don’t worry, Dorothy, you’ll have another baby all right. All you need to do is relax and stop worrying about it.”

In another seminal second-wave feminist text, The Second Sex, Simone de Beauvoir claimed, “The curse which lies upon marriage is that too often the individuals are joined in their weakness rather than in their strength.” Similarly, when Dorothy’s friend Estelle encourages her to dissolve her marriage, Dorothy explains, “I think we’re too unhappy to get a divorce.”

The novel takes on a fairy tale quality when Dorothy falls in love with Larry, a seven-foot-tall green sea creature who escapes imprisonment and torture at the hands of two scientists by murdering them. From the very beginning, Ingalls draws parallels between Dorothy’s more abstract sense of confinement with Larry’s captivity; minutes before she meets Larry, Dorothy cooks for Fred’s business dinner and idly compares herself to a lab rat:

She kept her thoughts running―first this, then that, and at the same time such-and-such, and don’t forget the pinch of thyme―and her hands moving. It was like some kind of test or race. Perhaps, like her, laboratory rats took a pride in solving the puzzle scientists set them.

Like The Tempest’s Caliban, Larry is a physically deviant creature who was enslaved based on his otherness; he was served with electric shocks when he misbehaved, and he has an almost childlike curiosity about the world that is based primarily on his bodily sensations. And like Caliban, Larry can be read as an alternately successful critique of the “noble savage” archetype. News reports portray him as a savage monster, and focus on traits that are reminiscent of racialized epithets about colonized peoples, such as his “alien intelligence” and “animal instincts.” Dorothy explicitly connects his oppression to racial oppression, imagining his defense lawyers insist he was imprisoned simply because he is “of a different race.” She also directly connects his otherness to her own, telling him that the scientists insisted he was an entirely different species from human because they wanted an excuse to degrade him for their own gain.

For centuries people like that kept saying women didn’t have souls. And nearly everyone still believes it. Same thing.

The novel isn’t particularly interested in exploring race, or intersectional issues of oppression (which, funnily enough, reflects the flaws of many second-wave feminist texts). But it does a far more thorough job of portraying the bondage inherent to marriage, through comparisons to both Larry and Estelle. At first blush, Estelle seems to be the picture of a liberated, modern woman. She’s happily divorced, she has a career, she openly discusses her ambivalence about motherhood, and she’s having fulfilling sex with two younger men who both want to marry her. When Dorothy mentions to Estelle that she needs to entertain Fred’s business associate, Estelle replies, “And you’re scurrying around to fulfill all your wifely obligations. My God, I don’t miss that.”

But then, the reader experiences a significant perception shift of Estelle when Estelle and Dorothy run into both of her younger lovers out with even younger women. Dorothy assumes that Estelle would be fine with it, since Estelle is two-timing them as well, but Estelle is devastated that she never had as much power in the relationships as she (or we) thought. They didn’t want to marry her because they were in love with her, but because they wanted their own personal servants.

“I wasn’t the one who kept asking to get married,” she says. “That’s what makes it so horrible. They’ve got to have somebody to do all their domestic drudgery full-time, and substitutes when the fancy one is out with somebody better.”

In Mrs. Caliban, married women are expected to subsume their own identities in favor of their husbands’. There’s a perfectly reasonable and text-supported reading of the novel in which Larry is a figment of Dorothy’s imagination, her more animalistic id who ultimately frees her by causing her husband’s death. But even after her husband is gone, and the mysterious messages from the radio have ceased, Dorothy doesn’t experience any sort of self-actualization or feelings of liberation. Instead, she’s obsessed with recovering her relationship with the now-missing Larry—the ideal partner who was passionate, respectful, and enjoyed helping her with housework. When a woman asks after Dorothy’s late husband, Dorothy conflates Fred with Larry, because even when she’s not mourning her husband, she’s mourning her ability to consume her life with another person, the chance to define herself based on a man.

Nowhere is the tragedy of Mrs. Caliban better expressed than in its title. Larry is the obvious choice for a reference to Caliban, but the novel is concerned with a gendered version of Caliban—an “abomination” of a woman who is held captive and can only break out by giving into her basest instincts. But even when she does “liberate” herself, she can only do so in relation to a male alter-ego, a paramour, an imaginary husband. She is not Calibanette, or Calibaness, or just Caliban—she couldn’t be called anything but Mrs. Caliban.