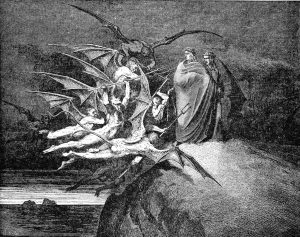 When I first read Dante’s Inferno in college, I had a professor who dreamed of learning Italian so that he could read the work in its original language. He confessed to suspecting that it may be more beautiful than Shakespeare. Eventually, he retired and did exactly that, but I never got to ask him his verdict. What I’ve always wondered: if a reader was intimately familiar with the politics of Dante’s time, would the punishments of the local politicians, the corrupt clerics, the local charlatans be that much more delicious? Mary Jo Bang’s raucous translation of Inferno, published in 2013, tries to bring us as close as she can to the intrigue of Florence in the 14th century. Through a combination of tone and allusions to contemporary American political and cultural figures, Bang gives us a translation that probably brings readers to Dante’s sense of schadenfreude better than any other.

The opening of Inferno is justifiably famous: halfway through his life, Dante finds himself in a dark forest, having lost the path. In Longfellow’s translation, Dante sighs pitiably: “Ah, me!” Just thinking of the memory makes Dante afraid, but for the sake of the good in the story, he will go on with the telling. As Longfellow puts it: “But of the good to treat, which there I found, / Speak will I of the other things I saw there.” We can’t fault Longfellow, really, for the poetic inversions and the formality of speech, since those were indicators of his own time, but here’s the crackling opening via Mary Jo Bang:

Stopped mid-motion in the middle

Of what we call our life, I looked up and saw no sky—

Only a dense cage of leaf, tree, and twig. I was lost.

It’s difficult to describe a forest:

Savage, arduous, extreme in its extremity. I think

And the facts come back, then the fear comes back.

Death, I believe, can only be slightly more bitter.

I can’t address the good I found there

Until I describe in detail what else I saw.

Unlike the long spooling sentences of Longfellow (and, to be fair, of the original), Bang opts for a clipped tone to suggest a kind of shell shock. “I was lost,” Dante admits, then considers the difficulty of describing the “dense cage” of flora he was trapped in. It is, he decides in a brilliantly brutal repetition, “extreme in its extremity.” And where the original Italian, by virtue of it being Italian, is sonorous with vowels, Bang goes in the opposite direction, musically. The cascade of monosyllables in the sentence “I think / And the facts come back, then the fear comes back” are as effective as the hard smacking sounds of the hard “k”s. To my ears, there is no better way to set the stage for what is about to be a truly terrifying descent.

Equally satisfying is Bang’s decision to mix in contemporary political figures with Dante’s Guelphs and Ghibellines. These political factions from Italy’s past may have been as nasty as today’s wars between the left and the right, but it’s hard for any modern reader to really absorb how much this meant in Dante’s world without the aid of extensive footnotes. Learning the context is part of the pleasure of the text, at least for me, but that’s also why Bang’s choices are so sly. The shock of recognition we feel when one of our own pops up in the depths of Dante’s hellscape brings Dante’s day-to-day home to us.

Take Canto 21, when Dante and his guide Virgil are about to enter one of the many pouches of the Eighth Circle of hell. The two are standing on a high ridge, with hot tar bubbling beneath them. Demons are carrying sinners back and forth, occasionally throwing them into the tar or poking them with pitchforks. Unlike most other translators, Bang doesn’t just leave these demons with the Italian names Dante gave them—she breaks down those names further, so the demons are “Badass” and “Scumbutt” and together form a group of “Psycho-clawz.” (I’m imagining something between a devil and a juggalo.) When Virgil convinces the demons that he and Dante need to pass, they arrange for a demon consort to escort them. Badass calls the guards, like a perverse inversion of Santa calling his reindeer

And Barbie, you be squad leader.

Let’s have Qaddafi too, and Dragan Nikolic,

Roadhog with his tusks, and Irma the Beast,

Bang’s allusions here are anything but arbitrary. She carefully details in her notes how the demon’s original names spark echoes of contemporary figures. Barbariccia, for example, was the nickname of a corporal from Florence, but Bang wants us also to think of Klaus Barbie, a captain in the Nazi Gestapo. (And possibly the demonic doll, too, though she doesn’t admit this.) Libicocco in the original Italian may point to a figure from Libya, so Bang gives us Qaddafi, the notorious dictator of Libya. And it’s impossible to overstate the deliciousness of pairing Donald Rumsfeld, or Crazy Rummy, with a demon named Fubar. (If you need to look that one up, go ahead. I’ll wait.)

I’m not a Dante scholar, and I may not ever use my retirement to learn Italian to read Dante’s original text, but Mary Jo Bang brings Inferno to a different kind of life for me. And what I feel more keenly than ever revisiting it now is that it’s high time someone did a translation for the Trump-era. Translators, get on it.