Home
»
Interviews
»
“Men have imagination, but women just have experiences”: An Interview with Rachel Haley Himmelheber 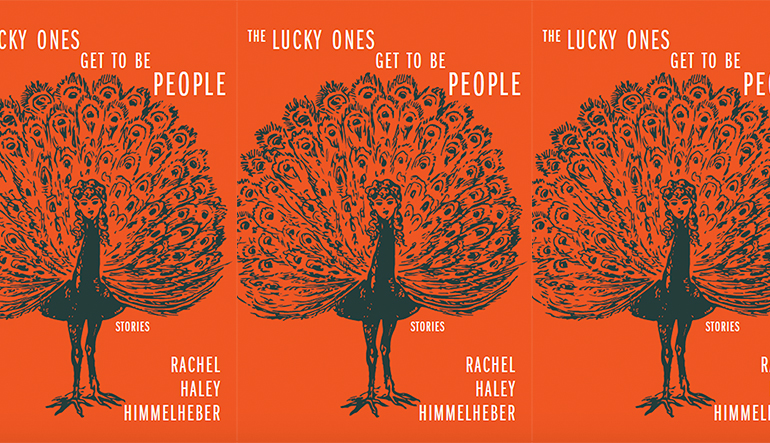 I keep two personal notes above my writing desk. One is from an artist friend in Chicago, who sent me an abstract vagina breaking free of a brick wall, collaged under the words “Womxn riot as writers.” The other is a scrawled affirmation: “Annie—you could win in any fight.” While a casual observer may see objects like these as red flags for feminist aggression or loud-mouth tendencies, a writer like Rachel Haley Himmelheber—whose 2018 short story collection, The Lucky Ones Get to Be People, critiques society’s desire for well-behaved women—would approve.Rachel Haley Himmelheber’s recent collection is a critique of society’s desire for well-behaved women—her characters riot and fight against the odds, either out of habitual necessity or because putting up a fight is easier than letting your guard down.

Himmelheber’s characters seem to riot and fight against the odds, either out of habitual necessity or because putting up a fight is easier than letting your guard down. In the titular story, a woman wrestles with a loss of power by entering a cruel sexual relationship. In another, a child watches his mother for violent signs of selfishness. The stories hover above an unspoken danger, but the reader feels a nameless encroaching dread behind them like an uninvited shadow, lingering.

Himmelheber releases into our judgment a lonely herd of characters going through unstable and unethical lengths to find intimacy. As they slouch about their stories, each character faces a choice between allowing a relationship to deepen their unfulfilled lives, or dodging true connectivity by any means necessary. Cruelty, frustration, and objectively bad behavior are infused with relatable human loneliness and our desire to achieve an ever-more-elusive inner harmony. In her stories, Himmelheber coaxes our empathy from often fractured narratives at the same time that she challenges the literary lust for nurturing women. She lists Carole Maso, Jennifer Egan, and Mary Robison as some of her literary influences—writers who each employ their own styles of postmodern fragmentation in the visual structures of their books, thereby giving license to the reader to fill in character gaps. And the desire to complete—or at least repair—Himmelheber’s characters is palpable as a reader. This ontological dexterity in prose signals a writer at the top of her game, both as an intellectual whose work deserves cross-examination, and as an accomplished storyteller.

While it’s impossible to speculate on the beginning of Himmelheber’s interest in audacious women acting out in their respective environments, the timeline of her research into feminist literary tropes—including deep dives into classic fairy tales and a novel-length dissertation on female friendships (Himmelheber received her MFA in Fiction from New Mexico State University and her PhD in English/Creative Writing from the University of Wisconsin-Milwaukee)—demonstrates a sustained interest in the narrative boundaries between gendered expectations and universal experiences of human pain.

I spoke with Himmelheber over the phone from her office at Warren Wilson College, where she teaches creative writing in the undergraduate program, about the research and sources of information for this collection, including self-help books, mall Santas, studies on mental illness, and fairy tales.

Annie Raab: Your characters don’t seem to get messages right in front of their eyes, and I found this an engaging way to keep the reader in suspense. Was this a deliberate choice or was it a commonality that emerged as you put the collection together?

Rachel Haley Himmelheber: I have always been interested in denial as an emotional state. It’s interesting to think about denial after you’ve stopped being in denial—there’s something about it that has always attracted me as a writer, and I try to write through those moments. For characters, there’s quite a lot of bad behavior and bad choices in this collection, including characters missing clues that are perhaps obvious to the readers. I guess this comes from my interest in thinking about what denial looks like when you realize, Oh, everybody else has seen this thing about me, but I just couldn’t see it. Then it becomes almost unbelievable even to yourself, like, “How could I not have realized this thing?”

AR: The story “Happiness Reminders” really got into that. The drama unfolding between all the characters felt really compelling in that the characters are looking for happiness without compromising their comfort. Were you playing with the idea that we must know ourselves in order to be happy, but maybe there are dark parts we aren’t willing to face?

RHH: Those characters are all messing up their love lives and their work lives. And of course, they’re unnamed, so they are those roles: cop, robber, girlfriend, lawyer, Santa Claus. This story changed a lot through revision, but it originally started with self-help books. One day, I was walking around a book store when I saw The Complete Idiot’s Guide to Happiness, and I was just totally charmed by the idea that you could be a complete idiot and—through this book—learn how to be happy. So I sat down on the floor of the bookstore and read the whole thing, taking notes on all of the bolded headings in the text. A lot of that language left the story, but some of it is still embedded in “Happiness Reminders.” I was thinking about archetypes and self-help and therapy culture and the contradiction that you can name a problem, you can articulate it, but that doesn’t mean you can actually do anything to change that problem.

AR: There’s a part in the story where the male cop is consuming a lot of women’s magazines, and that self-helpness comes in with a flipped gendered audience. But the advice seems pretty non-gendered for that character.

RHH: Right. And there’s a moment in that story where the girlfriend is thinking of all the things she’s been told to do over the years from articles about sexual assault. I was interested in just how much advice is offered for a task that’s impossible to prevent—the only way you can avoid being assaulted is to never be in proximity to someone who will assault you. So, the girlfriend is getting all these contradictory rules. She feels trapped with her anxiety, even though the intention of an article like that is, ostensibly, to help people feel less anxious. This all comes from self-help and my dark sense of humor—you go to these things to become less anxious but end up feeling more anxious from all the contradiction and advice that’s impossible to follow.

AR: Your characters royally screw themselves over in their search for intimacy. What interests you about the lengths people will go through to find intimacy, often to the point where it becomes damaging?

RHH: A lot of the characters in this book throw up roadblocks and create ways to not experience intimacy, or the intimacy they choose to experience is cruel. In the title story, the character, Janie, moves away from a relationship with her professor—someone who held a lot of power over her—to a sexual relationship with someone who is intellectually disabled. She clearly thinks the new man is inferior to her, so she holds all the power in their relationship, and there’s cruelty there. The control issues in that story keep her, at every turn, from experiencing real intimacy. I think there’s a lot of fear in the book. I feel that although the characters think they are trying to be better, they are actually doing things that inhibit self-improvement or real reflection. I think it’s a pretty typical response to fear in the world—to be articulate, yet powerless to get what you really need. So many of these characters are so sad to be lonely, and so afraid not to be lonely.

AR: Did you find any of the stories especially difficult to write? Did you have any trouble inhabiting any of your characters?

RHH: The two most difficult characters to write were Janie, from the title story, and Tiffany from “In One Universe.” These stories are both very voice-driven, and their voices feel so angry and full of suppressed anger—not always fully suppressed—but living with that kind of angry cadence in their voices. When I was drafting the title story, I remember people around me would say, “Ah, I can tell you’re working on that story!”

These women aren’t very likeable, but I have very little patience with people wanting female characters to be likeable. What I understood in these characters was that feeling of being unhappy and wanting to be around other people with your unhappiness, but using your misery as a buffer, a barrier to really connecting. I understand that, and so that was a way into their stories.

AR: While you were working on these stories, did you ever have to explain to readers that these were not stories about your life/desires/interests/emotions?

RHH: I don’t know that I’m writing for a huge audience, but I do assume that my readers understand I’m writing fiction. I’ve been lucky to have had really good readers over the years. But that’s always a thing with fiction—people will assume something is about you, or that a detail you’ve twisted from real life and put it in a different context reveals something personal that can be followed and decoded. At the same time, readers can be dismissive of work that is overly personal, and it’s in line with critiques about confessional poets—that something true can’t be taken seriously. It’s very gendered too. When male writers make the same moves in fiction or poetry, we often praise the work, even if a woman writer has been criticized for the exact same reasons. Men have imagination, but women just have experiences—stuff like that.

AR: Did you do a lot of research while you were writing these stories? Mental illness? Mall Santas?

RHH: Yes! It’s funny because I did actually find out some things about the jobs of mall Santas and mall security guards. I can’t even recall if anything I researched made it in. But, as I tell my students, sometimes all the details don’t make it in, but the knowledge you gain can give you the confidence to write it in a way that feels like you know what you’re talking about. If you can pick the details from your research and add them into the story, it will feel like you understand the mechanics of whatever job or setting in the real world you’re writing about.

I definitely have done quite a bit of research around mental illness. And I’m just a general scavenger-observer-eavesdropper in the world. Most of the places that appear in this book are places I’ve either lived or visited, or are pastiche of a bunch of locations. The last story, “The Hawk,” is a fairy tale. Quite a bit of research on fairy tales went into this, and if the reader knows a lot about them, you can see the details from certain fairy tales embedded in the story.

AR: What was the transition of this collection like as it grew from your graduate school thesis into a published book?

RHH: The book became much more about mental illness over the years, and that’s something readers pointed out to me. It wasn’t conscious. And while I hope some parts of the book are funny—at least grimly funny—the book got more serious over the years as I got more comfortable and less evasive with my material.

RHH: I’m working on a book of linked stories about American politics, working in a mode called “counterfactual historical narrative” where you take real people and events and mix them in with fantastical people and events. So, for example, Barack Obama and his sister and grandmother are in the book, Hillary Clinton, Edward Snowden, Julian Assange—lots of people from our political world today. They are both recognizably themselves, and also very different. I hope it’s funny and full of awful things.

Tags:Rachel Haley Himmelheber, The Lucky Ones Get to Be People