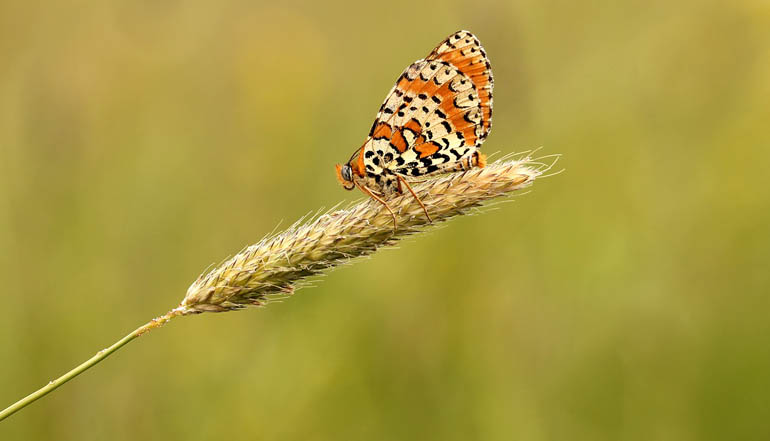 Birds get a lot of press. To name just one of the illustrated anthologies of Emily Dickinson’s bird poems, A Spicing of Birds celebrates 222 of her muses. The Academy of American Poets’ list of poems about birds includes standby homages like “Ode to a Nightingale” and “The Raven,” as well as contemporary notables like David Baker’s “The Blue,” in honor of the great blue heron. There are enough bird poems to fill anthologies such as J.D. McClatchy’s On Wings of Songs and Billy Collins’s Bright Wings. Feathered fauna are so frequently lauded that, among the many scholarly articles that follow suit, a reporter for the Guardian investigates the question for the public in an article titled “Why Are Poets so Fascinated with Birds?” and concludes that their popularity is due to the “natural metaphor” the songsters provide.

But birds are not alone in singing or in originating metaphors. There are other winged creatures that croon and hum and carry. We are among multitudes that raise a chorus to the elements, especially in August. Cicadas, yes, but also crickets, katydids, and grasshoppers texture the swell of sound that characterizes summer. Plus, insects crawl and flag and toil, many as outlandishly arrayed as honeycreepers. Moths, bees, and skippers garden as if choreographed by the Royal Ballet Company. Beetles outfit themselves in samurai-worthy armor. Mantises mimic orchids and mendicants. Twenty-four orders of insects undergo some form of metamorphosis. Over a dozen change form entirely, including the famous butterfly but also flies, fleas, wasps, scorpionflies, beetles, thrips, etc. Take that, birds.

Insects are far from overlooked, as Issue 59, “Insect Poetics,” of The Volta attests, but our attention is inevitably incommensurate with their numbers. According to Audubon, most bird lists count 10,500 species worldwide. The Smithsonian confirms eighty-five times more described insect species, at nine hundred thousand. Most entomologists estimate that millions more await descriptions and are lost while waiting for them. Beetle expert, Terry Erwin, who conducts research in the Amazon Basin, hypothesizes as many as thirty million. Considering that every species is distinct in some way, that’s a tremendous reflecting pool of difference.

And commonality, as many writers attest, illustrating their metaphorical power. Circa 1200 AD, Bahauddin Valad, the father of the Persian poet Rumi, makes this comparison, translated by Coleman Barks:

A candle has been lit inside me,

for which the sun is a moth.

Approximately 740 years later, Virginia Woolf notes a similar compression. In her essay, “Death of the Moth,” she senses within the moth “a fibre, very thin but pure, of the enormous energy of the world.” The idea remains compelling—that what animates life is measured not by the form it takes but its performance.

In 1667, Matsuo Bashō offers this haiku, translated by Robert Hass:

Insect metaphors invite empathy. They also court anthropomorphism, but empathy doesn’t default there. Finding a point of connection is also worth the risk, though I won’t elaborate the reasons here. Interested readers will find them developed in Virginia Morrell’s Animal Wise, Allison Hawthorne Deming’s Zoologies, Matthew Gavin Frank’s Preparing the Ghost, and Elena Passarello’s Animals Strike Curious Poses. I will just point to a line from Gavin Frank’s meditation on the word “likeness” in which he writes, “The truth is there, but the truth is in symbols.” Signs are often how insect metaphors work best, as pointers across species toward the underlying relatedness our genes demonstrate.

Loren Eiseley’s 1956 essay “Brown Wasps” opens in a train station. He begins where his readers are with the human. There is a corner in every station he has noticed where “women never sit.” A congregation of the dying, the tubercular or exhausted or poor, is drawn to the station’s shadows, to die among fellow travelers rather than alone. Have we noticed them? He implies the question. They are easy to overlook. How utterly, or somewhat, unlike us are they? The degree to which we see ourselves on those benches, prodded on the hour by policemen, is the degree to which we can see ourselves reflected in the wasps he describes. Sodden and “frost-blackened,” a few wasps return to an abandoned nest midwinter. Why? Eiseley guesses that the hive still thrums in their bodies. What is the application of such research but comfort, which we of the world are drawn to variously hopeful?

Of course, we don’t always reach for solace, as Mark Doty demonstrates in “Deep Lane,” one of many poems bearing the same title as his collection. In my favorite, he considers the tick as Blake does the tiger. Doty asks the Lord why he has given the tick life. What mind conjured into paradise creatures that want “nothing but to gorge, to suck . . . pure appetite”? The speaker, admitting his grasp of such a mind and the answer, claims, “I wouldn’t know anything about that.” Like Bashō’s bee, Doty’s tick reduces us to one thing—desire, which is complicated. Through the tick he forces us to look at a facet of ourselves we might rather not see—particularly with regard to climate change. We too are “heat-seeking” and “multitudinous.”

Insect metaphors give us perspective. I’ll close with a prose example from David Haskell’s The Forest Unseen, which chronicles a year watching a patch of Tennessee forest. When a moth finds his sweaty finger among the saltless leaves, it clings to its fortune:

Diamonds may be the crystal of choice for wooing humans, but moths seek

Haskell doesn’t mock human impracticality for gifting our mates sparkly gems in lieu of life-giving crystals, but he does give us a different way of seeing such exchanges. To moths, the sweat that oozes from us in summer is “like soup through a sieve,” he says. Even the poorest among us are a bottomless cup—as they can be for us a source of boundless viewpoints.