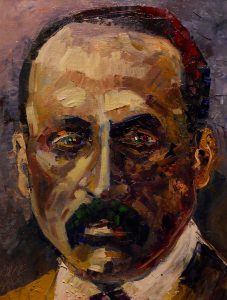 Often cited as self-help before the genre existed, Rainer Maria Rilke’s Letters to a Young Poet contain much wisdom in few pages. These ten letters written to a fellow writer named Franz Kappus span a five-year period (1903-08). What makes these letters and their advice so vibrant and alive—aside from Rilke’s prose, moving even in translation—is their timelessness. The older poet’s guidance serves as an antidote for the overstimulation and anxiety plaguing so much of our digital, hyper-connected world. This is thanks to Rilke’s admonition to live a more mindful life—starting with inner work.

According to Rilke, the best stories are the personal ones. He urges Kappus to “flee general subjects and take refuge in those offered by your own day-to-day life; depict your sadnesses and desires, passing thoughts […]” Surely Rilke would support journaling or writing morning pages à la Julia Cameron’s The Artist’s Way. He feels profundity can be found in the trivial, and if the writer cannot find the magic, it’s the writer’s fault—not boring life’s.

He suggests waiting for ideas and feelings to flesh themselves out “in the dark, in the unsayable, the unconscious […]” Only then are stories ready to be told. The importance of patience is repeated throughout multiple letters. It could be Rilke’s mantra. His image is a tree, calm amongst spring winds, confident that summer will arrive. Patient people, like trees, quietly exist, “as if eternity lay before them.”

Anyone who’s undertaken yoga, meditation, or any sort of mindfulness practice has probably heard a message encouraging a deep trust in life and its events. “Life is right, whatever happens,” Rilke writes. The idea of not clinging to things, of letting things happen to you, is a powerful one that’s not easy to accept. Rilke suggests channeling your inner child: “Any thoughts that match up to your childhood are good.” Children live in a realm of heightened awareness and openness to all experiences, especially new ones, making it easier to cultivate “courage for the oddest, the most unexpected, the most inexplicable things that we may encounter.”

In the letters, Rilke holds up loving as the most courageous act. It’s “the work for which all other work is just preparation.” Most of our lives are lived learning to love, and if this period of tutelage feels lonely, it’s because it is—a “heightened and deepened loneliness” even. “Almost everything serious is difficult,” says Rilke. One of the most trying states of being is loneliness. We arrive and depart the world alone, and Rilke urges finding solace within ourselves, believing this is where the real work begins.

The growth of solitude is “painful,” he writes. For it to be felt, it must be huge: “for what (you must ask yourself) would a solitude be that was not great?” It’s natural to want to exchange long bouts of solitude for the company of friends and family. When you do, however, try to “avoid providing material for the drama which always spans between parents and their children.” For Rilke, the demands of a social life should not impede the progress of a solitary one.

Another social element Rilke explores is the role of the sexes in life, both romantic and daily. Here, he uses a modern language of gender equality, writing that women must “[shrug] off the conventions of mere femininity” to one day “no longer just signify the opposite of the male but something in their own right.” When this happens, love will never be the same again.

Undertaking a life of loving, art making, writing, or any creative human endeavor is hellish. Often everything is stacked against the undertaker. Rilke’s letters don’t shy away from this fact but rather offer enduring insights into how to live a joyous life in a world that so often seems the opposite. Just remember: “there is beauty everywhere.”