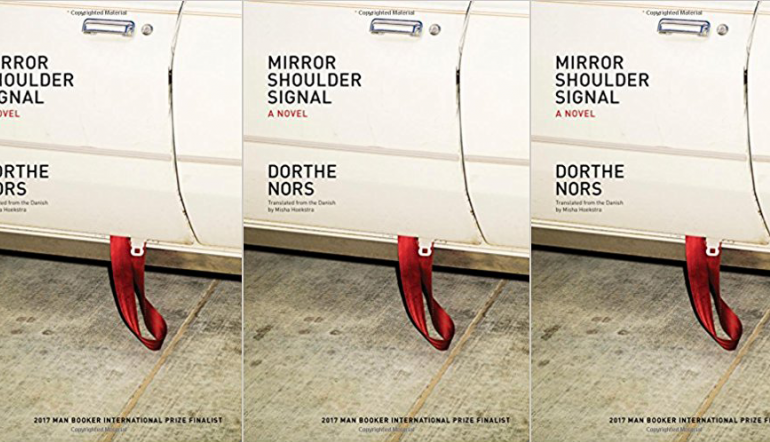 Sonja has reached her forties and is not sure what she’s seeking, but she knows it’s not here, it’s an escape. Her life is cluttered with translating grisly Swedish crime novels, hectic city life near Copenhagen, learning to drive from a ruthless instructor, and “benign paroxysmal positional vertigo,” or “positional dizziness”:

Sonja’s standing upright now and can feel that something in her mouth wants to escape. She stands there and chews on it; it feels dry and sticky and adheres to her gums. Home-baked white bread with brown sugar, that’s what it feels like, but whatever it is, it blocks the flow of speech.

Through Sonja, Dorthe Nors—author of Karate Chop and Minna Needs Rehearsal Space—shines a murky light on where we all live: in an imbalance, sometimes comfortable, sometimes unbearable. Reminiscent of Lydia Davis, Nors sifts through large concepts with concise language, wry humor, and a contained plot. “Sonja’s a woman in the middle of her life, she’s an adult now. She no longer needs for people to always get along, and she can’t make them either.”

Sonja attempts to repair her uneasy relationship with her older sister, who is married with two sons. “It’s early August, and Sonja does not like Christmas. It all revolves around Kate’s shopping lists and minimizing damage by winding back time.” Sonja sees an intuitive masseuse, who deems her vertigo “spiritual.” She ponders returning to her rural home of Jutland, which she left years ago to attend university in Copenhagen.

A large part of Sonja’s journey references nature, thoughts flowing like wind through a field of rye, emotions moving painfully, like roots shoving into rocky earth:

The leaves of the succulent poke up from the soil like knives. Or tongues. Or fingers that are reaching for Sonja’s face and mouth. A vulgar plant, she thinks, throwing it into the wastepaper basket. There it lies, atop the heather, atop the letter, atop the things she cannot find the language to say and the people she most wants to say them to.

A look at nature often seems to paraphrase the magnificence and peace she’s seeking. “A short time later the sky lashes out, and a vast exchange commences between the earth and sky.”

Often meditating on sadness and separateness, Nors writes Sonja’s life with some emotional distance, yet also, at times, with intense affection. And while the story contains overarching symbolism, metaphors, and analogies (driving as a method of escape and independence, vertigo as a lack of life balance, nature as a grounding force), Nors’s hand remains light, and the effects are subtle and elegant.

This is not a book to turn to for self-help. It contains the scary white noise of an endless weekend, evidence of a mind that will not rest. Yet, witnessing Sonja’s transformation from neurotic to possessing a more certain power of navigation is aching and significant. At the outset, Sonja frets, “It’s difficult to be present in the snow. There’s always something tugging you away. A spot itches, or you’re afraid of ticks.” And later, refining her navigation skills: “A simple distance, thinks Sonja. No diagonals.”