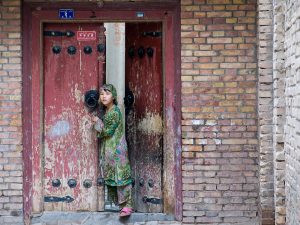 Most of us who now call ourselves Americans were at one point something else, or else we owe our citizenship to family members who immigrated. In the brouhaha of fear following the Paris attacks however, this has almost entirely been forgotten, adding more steps to an already long process for any refugee to enter the United States, not to mention the process already in place for non-refugees who wish to reside in the country.

In Part II of this series (Mirrored Crisis: Post-Trauma Diaspora Memory through Jonathan Safran Foer’s EVERYTHING IS ILLUMINATED), I looked at the aftermath of forced mass migration, to remind ourselves that the effects of refugee crises do, indeed, impact their descendants. This last part of the Mirrored Crisis series will conclude looking at the immigration of those who cannot do so officially through Atticus Lish’s Preparation for the Next Life.

One of the main characters of Preparation for the Next Life is Zou Lei, an illegal half-Uighur, half-Chinese immigrant to the United States from northwestern China. Zou Lei, after being detained for an unknown period in a jail in the US, ends up in Queens, New York, where she earns her living through a series of jobs in Chinese restaurants. Wherever she works, her coworkers sense she isn’t entirely Chinese:

The women were from Begin to Celebrate, Four Meetings, Connected Mountain, and Honesty Admired. She told them she was from south of the river.

But you’re from somewhere else, they said.

You don’t look it.

In the sun, you could see Zou Lei’s hair was brown and not black. There was a waviness in it.  She had a slightly hooked nose and Siberian eyes.

Our China is a big country, she said.

Thus even surrounded by her “countrywomen” working the same sorts of jobs in the United States, Zou Lei is doubly away from home. Until she is rounded up one day by undercover police, we don’t get to glimpse what home really means, nor why she left.

Home for Zou Lei is a place of “a suntanned old man sitting up front holding a lash, carrying melons, peaches or his daughters in the back,” where “…if you turned and looked downhill from the mosque, you saw the end of the city, the last stones of the wall, then the gravel on the ground and the red sand and the desert descending away from you” with the “desert wind” the only sound until the evening azan. Home is where “the women worked in earrings and skirts and headscarves with flowers on them.”

Yet internal conflict intervenes to push Zou Lei to leave. Her father, a Chinese soldier, dies. Her mother takes her to the city, where the money from the army as compensation for his death quickly runs out, just as Uighur separatists protest in their home province. Zou Lei’s Uighur mother, and Zou Lei herself as half-Uighur, find surviving to be even more difficult. They move to Shenzhen to work in factories where, even in China, they were considered to be illegally working, where they would get sick off of the food they cooked at home, and no one was there to help them.

These become the circumstances under which Zou Lei leaves. We never learn if Zou Lei’s mother lives or dies, but this becomes immaterial. From working in the factories to picking up beer bottles from trash at 2 AM from “amid the litter of Styrofoam bowls dripping with chili oil and the throwaway chopsticks under the woven plastic tenting and still-burning light bulbs strung over the unpaved street,” anything has to be better, even working fourteen hour days as Zou Lei eventually does in the United States.

In 2014, 3.5% of the US population was comprised of illegal immigrants. The amount of Chinese illegal immigrants remains unclear though according to numbers from February 2013, China is the fifth largest place of origins for illegal immigrants into the US. When we see these numbers, we often forget, or rather perhaps we never even think of, why a person immigrates illegally.

In Turkey, where for years the resident permit process was an easy affair, with many papers but with a quick turnaround of a week after you had your appointment, has become so cumbersome and complicated in Istanbul, that American and European-passport holding friends have turned to paying people to get appointments. For an entire week, a friend of mine would hold shiva in front of his computer until 9 am. He would then press enter on the Turkish Immigration Bureau’s page, his data entirely entered in, only to find that while appointment days showed up, he could not click on any of them. The system would then close at 9:01 AM, not to reopen again until 9 AM the next day, when the same events would take place. This friend ended up contacting a man who, through some backdoor connections, was able to get him an appointment, for a price of course.

Zou Lei essentially tries to do the same through hiring a lawyer, though this in the end does not work, and for the purposes of avoiding spoilers, I won’t go into why. While those of us who want to live in Turkey go through a comparatively simple process, even we will take a side route to staying, even if that means offering bahşiş (a bribe), even now when bribes are no longer a common practice.

All of us owe our birth citizenship to the random factor of birth. When we choose to move to another country, and to work there, thereby contributing to its economy and its culture, the path to do so should not be barred. After all, in the great American mythos lies, the saying goes that our forefathers came “in search of freedom and a better life.” So many immigrants, legal or illegal, are looking for a decent way to live without discrimination, just like Zou Lei, in a country that was built by immigrants.