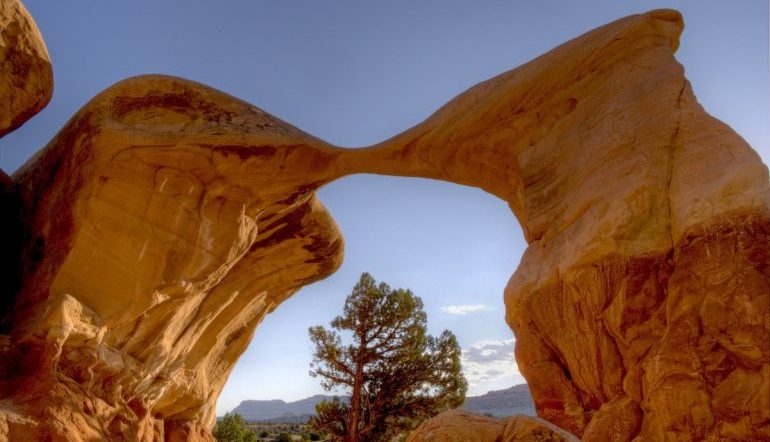 “This is not a travel guide but an elegy,” Edward Abbey wrote in his introduction to Desert Solitaire. Fifty years ago, he could already see the trampling of industry on the fragile desert country he had grown to love during his time as a ranger in what is now Arches National Park. In this memoir chronicling his “season in the wilderness,” Abbey launched a passionate defense of the unspoiled West, emphasizing caution and respect for the land:

Do not jump into your automobile next June and rush out to the canyon country hoping to see some of that which I have attempted to evoke in these pages. In the first place you can’t see anything from a car; you’ve got to get out of the goddamned contraption and walk, better yet crawl, on hands and knees, over the sandstone and through the thornbush and cactus. When traces of blood begin to mark your trail you’ll see something, maybe.

At the time of his writing, Abbey raged against the developments he saw changing the pristine landscapes of the West. The Glen Canyon Dam, completed two years before Desert Solitaire’s publication, plugged the Colorado River and filled Lake Powell, shifting the river’s flow and flooding sites sacred to Native Americans. Construction of roads around Zion and other wild places brought a new threat to the region in the form of carloads of tourists, prompting Abbey’s lament: “most of what I write about in this book is already gone or going under fast.”

The 1968 release of Desert Solitaire met initially with little fanfare, as John Buckley writes in High Country News. “Another book dropped down the bottomless well. Into oblivion,” Abbey wrote in his journal. He could not have foreseen how, in the time before his death in 1989, the book would rise in popularity to become a beloved and oft-quoted manual among desert enthusiasts trekking westward. He might not have predicted the progress the country would make over the next fifty years either: the upsurge in environmental awareness and activism, the expansion of public lands under protection from development, and new laws limiting the reach of industry. Abbey himself might not have believed his own role in spurring an Earth First! movement and a cadre of “monkeywrenching” activists fighting for conservation of our lands and resources.

But while the country’s progress in protecting desert wilderness over the last five decades is undeniable, so, too, are the setbacks of the last year under the current administration. What can be done over fifty years, it turns out, can be undone in one. The Trump administration has rolled back clean air and water regulations, reversed protections of endangered species, and favored oil, gas, and mining interests over environmental protection. In December, the president signed a new proclamation to reduce Bears Ears National Monument in Utah by 85 percent, leaving two disconnected parcels, and cut nearby Grand Staircase-Escalante National Monument in half. In the face of these setbacks, Abbey’s words, his call to activism, and his warnings against complacency are as relevant now as ever.

Desert Solitaire recalls the desert landscape in vivid descriptions that remind us of its unique beauty: “The slickrock desert. The red dust and the burnt cliffs and the lonely sky—all that which lies beyond the end of the roads.” Other writers have followed in Abbey’s footsteps to try to capture the elusive spirit of the desert, encountered only through patience and a stripping away of any preconceptions or illusions. As Barry Lopez writes in Desert Notes: “The land does not give easily. The desert is like a boulder; you expect to wait. […] You must come with no intentions of discovery.” Lopez also conveys the desert as a living, breathing thing:

I know what they tell you about the desert but you mustn’t believe them. This is no deathbed. Dig down, the earth is moist. Boulders have turned to dust here, the dust feels like graphite. You can hear a man breathe at a distance of twenty yards. You can see out there to the edge where the desert stops and the mountains begin. You think it is perhaps ten miles. It is more than a hundred. Just before the sun sets all the colors will change. Green will turn to blue, red to gold.

Other voices have joined the chorus of desert writers-turned-activists intent on rousing people to action with their words. Ellen Meloy, who passed away in 2004, wrote a powerful portrait of the desert in The Anthropology of Turquoise that echoed Abbey’s passion for and spirit of the canyonlands:

Despite the obliteration of the natural world by environments entirely of human invention, despite the preponderance of lives now spent in artificial light, the human eye evolved in daylight…. Our bodies are still profoundly timed to the heavens. Our perceptions remain our only internally generated map of the world. We are blood-tied to the landscape by the language of cells….

… For me it is simply instinct, and perhaps this is all that a person can try to put into each of her days: attention to the radiance, a rise to the full chase of beauty.

Terry Tempest Williams, author of numerous books about the spirit and landscape of her native Utah, has become one of the strongest voices for protection of the wildlands of the West today. “As the world becomes more crowded and corroded by consumption and capitalism,” she wrote in Red, “this landscape of minimalism will take on greater significance, reminding us through its blood red grandeur just how essential wild country is to our psychology, how precious the desert is to the soul of America.”

Williams has been one of the most outspoken critics of this administration’s recent moves to dismantle environmental protections. She penned this plea to protect Utah’s public lands from gas and oil extraction and mining, another battle that Edward Abbey saw coming. This November, Williams will join other writers and environmental activists in Moab, Utah, for a tribute to fifty years of Desert Solitaire, invoking the spirit of that cantankerous ranger who made his home in the desert and refused to be quiet about what loomed on its horizon.