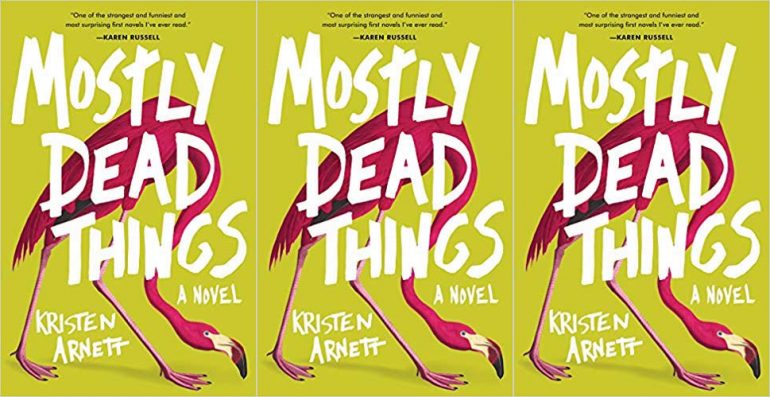 In Kristen Arnett’s debut novel, Mostly Dead Things, the messy life of a family is laid bare on the page. In the opening pages, young Jessa-Lynn and her brother Milo watch their father, a taxidermist, cut open a deer. Years later, in her thirties, Jessa finds her father dead by suicide. She tries to keep the taxidermy shop running and to hold the family together, but their mother, reeling from the death of her husband, is falling apart, breaking into the shop to arrange the mounted animals in compromising positions. Milo has become a shadow of himself, no longer caring for his daughter and stepson. His wife, Brynn, disappeared years earlier. Jessa was in love with Brynn—had loved her before Milo had, in fact—and both Jessa and Milo are unable to get out from under the weight of the loss.

This is a book where prose style and content work together beautifully. Arnett is not a flowery writer—she says what she means—and her honesty allows us direct access to her characters and their lives. We trust Jessa, as she is an excellent first-person narrator, looking at the world through often clinical and analytical eyes. It is in keeping with the business of taxidermy that the family cobbles itself together, trying to create life out of what is dead. “We were a family of taxidermists,” Jessa says. “We were collectors, dismantlers, and artisans. We pieced together life from the remnants of death.” In this novel, the dead resemble the living, and the living seem to be on the brink of death.

The book moves back and forth in time, the chapters alternating between the past and present as Jessa attempts to move forward with her life. Chapters in the present are simply numbered, while chapters in the past are named for animals, with both the scientific and the common names presented. In this way, for Jessa, the past is more alive than the present. “I often wondered,” she says, “why we couldn’t talk about the present, why the past held all the promise while the future sat before us like stagnant water.”

Jessa’s grief at losing both her father and Brynn has closed her off from the world. She is more comfortable with dead animals than with people: “I didn’t like being places where I felt out of my element. I liked stability, the comfort of knowing my surroundings and what to expect.” Her father leaves her a letter before he dies, which we never see in full but receive through Jessa as she writes about his wants and needs:

Need, my father had written. To need meant to be vulnerable. It was one of the scariest things I could imagine. Needing anything meant that you were open to invasion. It meant you had no control of yourself.

While Jessa misses and mourns her father, she misses Brynn the most, and her memories of Brynn are alive with passion and love. We see Brynn and Jessa first together as teenagers, and we can feel the desire and the need that Jessa feels:

Her eyes were slit and sleepy, cheeks dimpled. It was a soft face like a powdered doughnut, all sugary-sweet. Our mouths met again. My heart thumped wildly in my chest, scrambling behind my ribs like a burrowing animal.

When Jessa realizes that Brynn will never be happy with another woman, she sets in motion a plan for Brynn and Milo to marry. This is the only way, she decides, that she can keep Brynn in her life. But her plans are dismantled when Brynn disappears. As Jessa copes with her father’s death, she tries to understand what happened with Brynn in the past.

Just as the book explores the blurry line between life and death, it also investigates the boundaries of art and science. Taxidermy can be considered both, certainly, and at the start of the novel, Jessa sees her role as a taxidermist to be one of a scientist. Her mother, on the other hand, is creating lewd—and often quite funny—dioramas of the taxidermy in order to create meaning. Jessa repeatedly says that she cannot understand what her mother is making, but gradually, as Jessa heals, she is better able to appreciate her mother’s creations as works of art.

The reader experiences this journey with Jessa. We might recoil, at the start, from such frank and honest descriptions of the process of taxidermy, but by the time that Jessa works on three peacocks that she captures with her niece and nephew, we are awed by the beauty of these animals and how Jessa brings them back to life: “Perched on a bolted branch of an apple tree, the peacocks were a crowning achievement. Their tricorn heads bent lovingly toward each other, glittering feathers coated with a shellac of protective spray to ward off dust.” We can see that this is indeed the work of an artist, not only of a scientist. The two have merged into one.

Jessa’s father had always told her that the display was the key to success: “The mount meant that the animal had a place to live; it had a home.” Underneath it all in this novel is that search for home, even as Jessa has never left. For her, the search for home is a willingness to open herself up to life, to allow herself to live in the present, and to look forward to a future.