Home
»
Book Reviews
»
Mother Is a Verb by Sarah Knott 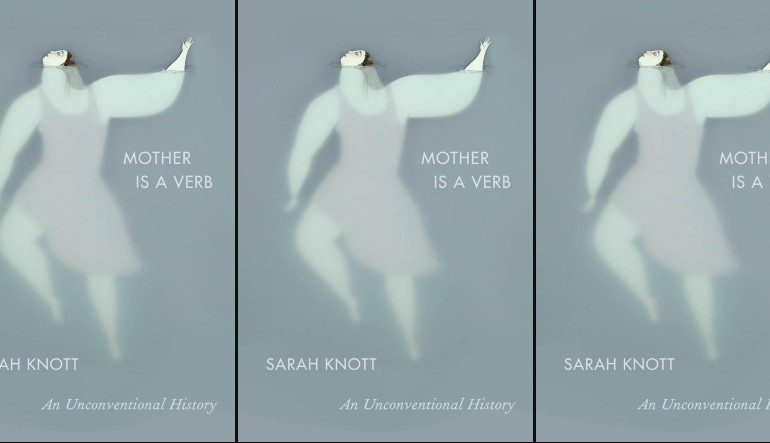 A woman hears a baby’s cry and tries to take meaning from the sound. A new mother brings her baby to her breast. Another mother straps a baby across her back and heads out to work the fields. A woman, interrupted yet again, puts aside her other work to tend to a child.

These stories play out over the centuries, with variations but also with surprising consistency. Seldom found among official records, often overlooked, they capture the reality of mothers’ lives. In Mother is a Verb, Sarah Knott collects and knits these stories together in an innovative history of motherhood.

Knott, an historian and faculty member at Indiana University Bloomington, has reached deep into archival material for stories of how mothers of the past spent their days. She lays the resulting stories out as a chain of anecdotes, their sequence roughly mirroring a baby’s development. Anecdote, in fact, is the primary form in which this history lies. Women wrote to one another, passed stories on to their daughters, or recounted experiences to midwives and doctors. Sometimes they gave an oral history to a researcher, wrote a poem or an essay. In fragments, they recorded what it was like to give birth, suckle, and care for a child. These bits have been compiled in scholarly books, often specialized by location or time; Knott melds them into a fresh and surprisingly personal look at three centuries of mothering in Europe and North America.

Her material derives from the English countryside, Victorian parlors, encampments of Native peoples, white settlements in New England and the West, cottages of enslaved blacks and tenant farming whites in the South, and contemporary cities. While she includes some links between practices of enslaved women and their African ancestors, her focus is on American and Atlantic history, areas where she has academic expertise, with limited reference to African and Asian cultures. Even so, the material represents a wide swath of time and territory. Yet it is more than a broad historical survey: the material is loaded with sensory details—the odor of stale milk or the rough weave of diaper fabric, for instance—and it feels close and personal. Knott combines anecdote, close observation, imagination, and her own experience for a window into the often mundane, frustrating and bewildering job of mothering.

The history she relates has a way of infiltrating the present. “Have you not poured me out as milk, and curdled me as Cheese?” was a refrain in a seventeenth century English sex manual. Sexual references to cheese have currency today. A four-hundred–year–old midwifery book recommended pouring a woman’s urine over barley seed; if it sprouted, she was deemed pregnant. Today, we use a drugstore kit, its stick, dipped in urine, signaling yea or nay.

Knott uses her own story to anchor the diffuse of historical material. She includes a scene of buying her own drugstore kit and later watching the line on the stick grow dark. “Here it is, then: the crossing of a line from not being pregnant to being pregnant, the moment of finding out.” That same evening, she is “eerily content. So I really did want to be pregnant, and now, abruptly, I am.”

Her miscarriage, two pregnancies and births, and experience nursing and endlessly trying to sooth a refluxy baby act as a through line; her story—which she treats with a light hand, never venturing into memoir territory—becomes an opportunity to reflect on other women’s experiences in short segments of personal essay.

She uses her own attempts at nursing, for instance, as a springboard for relating how other women fed their babies. When she first brings her baby to her breast, all goes wrong. Milk flows onto the sheets; little gets into the baby’s tummy and what does is expelled by his reflux. From there, she delves into a history of breastfeeding, including the role of wet nurses. She relates how one country woman was hired, in 1756, to fetch two foundlings from a London hospital and suckle them, along with her own infant. Traveling into London to collect her wages, she and other rural wet nurses “streamed over the town’s wooden bridge, passing the Thames barges headed into the metropolis, to collect their earning of two shillings and sixpence per week per nursling.” Knott then adds context so we can understand where wet nurses stood on the economic scale: “Male farm laborers in the vicinity might earn nine or twelve shillings a week for six days’ work. Women farm laborers might earn between three and five shillings, depending on the season.” Not highly compensated, nursing another’s baby was one of the few ways a woman at home could replace some of her lost farm wages. In the US, enslaved mothers were also wet nurses, but unpaid.

Of all the economic and political ramifications of motherhood, the most significant is family size. Seven or eight children per family, the average in the eighteenth and early nineteenth centuries, so occupied women that the notion of paid labor outside the home was either the stuff of fantasy or absolute necessity. The demographic shift to a smaller average, now 2.2 children in Britain and North America, divides history into what Knott calls “a ‘before’ of bearing many babies and inhabiting a body marked by multiple pregnancies and birth, and an ‘after’ of bearing just a few.” It marks a switch “from the prospect of continual maternity, layered over with grandmothering, to just a handful of years caring for infants.”

Just as families were getting smaller, intense industrialization “spurred a separation of male workplace from female home. Respectable female work was reconstructed not as wage earning, but as domesticity and mothering.” Men went to work and, if at all possible, women stayed home. Only very recently have women joined the workforce because of career or vocation.

Knott herself wrestles with what children will mean to her academic career. She knows the statistics: women with children are likely to be deflected or delayed in their accomplishments. At the same time, she is in love with first one, then a second baby. When she returns to teaching, she experiences the luxury of thinking about things other than children, followed by the thud of longing as she envisions them at home, without her.

The book ends with a morning scene in which Knott’s younger child has just slept through the night. “That marvelous phrase may not mean a full eight-hour adult stretch, but I do feel rested, startlingly clearheaded, ready to move mountains.” With the thrill of newly rediscovered sleep, she brings us into her visceral connection with centuries of other mothers, and the resonance of these endlessly repeating cycles.

Tags:Mother is a Verb, Sarah Knott