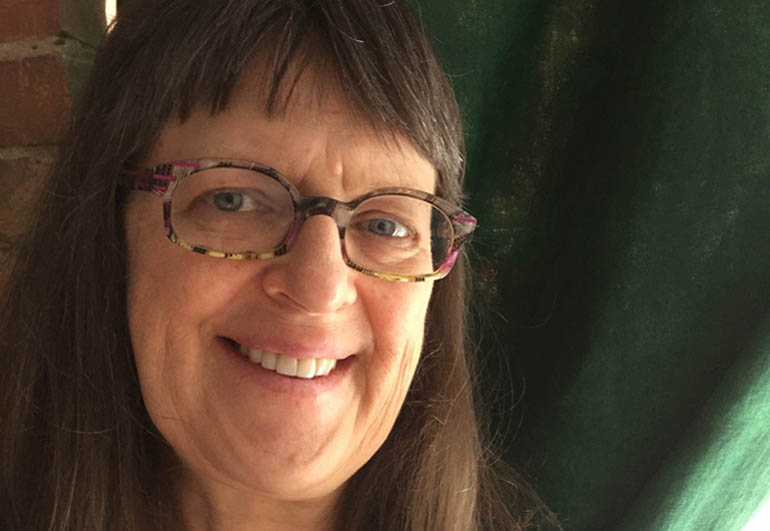 Over the past decade or so, Erín Moure has become just as well-known for her translation work as for her own writing. She has published sixteen books of poetry, a book of essays, and has translated fifteen volumes of poetry from French, Spanish, Galician, and Portuguese by poets such as Nicole Brossard (with Robert Majzels), Andrés Ajens, Louise Dupré, Rosalía de Castro, Chus Pato, Fernando Pessoa, as well as a chapbook of poems from Ukrainian by Yuri Izdryk (with Roman Ivashkiv). Her work in Canada has received the Governor General’s Award, Pat Lowther Memorial Award, A.M. Klein Prize twice, and has been a three-time finalist for the Griffin Prize. Her latest translations are from the French of François Turcot, My Dinosaur (BookThug, 2016); and from the Galician of Chus Pato, Flesh of Leviathan (Omnidawn, 2016); Rosalía de Castro, New Leaves (Small Stations, 2016); and Antón Lopo; Distance of the Wolf: A Biography of Uxío Novoneyra (Fondación Uxío Novoneyra, 2017). A major retrospective of her poetry, Planetary Noise: Selected Poetry of Erín Moure, edited by Shannon Maguire, appeared in 2017 from Wesleyan University Press. This fall, her translation of Wilson Bueno’s Paraguayan Sea will appear from Nightboat Books, and New Star Books will publish her memorial to a little man, Sitting Shiva on Minto Avenue, by Toots.

rob mclennan: You’re quite well-known now for both your extensive work as a literary translator, as well as for utilizing multiple languages within your own writing. What first brought you to working with and through multiple languages?

Erín Moure: A memory lane question! Well, I talk about that in a couple of places in Insecession (BookThug, 2014). Basically, when I was small, before I knew there were different languages, I did know I couldn’t understand my grandfather when he talked to my mom. Later, when I was five and in Grade 1 in Montessori School in Calgary in 1960, I learned there was French and that sounded different than what I spoke, which was English. But it seemed to work for people. So I thought Grandpa spoke French. Then I found out that wasn’t so. When I asked my mom what Grandpa spoke, she said Germanpolishukrainianrussianenglish. So I knew there was a third language. It took several years after that to realize Grandpa actually spoke five languages.

So from early on different languages were part of my consciousness. And I wasn’t that panicked about not understanding them as I couldn’t even really understand Mother Goose in English. Ride a cock horse to Banbury Cross. What the heck? My Grandpa made more sense to me.

I always loved poetry, even if I couldn’t understand it, and the first bilingual book I bought, in my early twenties I think, was a Neruda book, bilingual. So I kept staring at the Spanish and looking words up in dictionaries. Around the same time, I started to learn French properly at work, as an alternative to being laid off my job, and my partner at the time, a francophone, insisted I actually make an effort, so I learned.

Then I moved to Montréal, and my French grew because I wanted to communicate and listen. In the ’90s I went to Galicia and decided to learn Galician, etc. It seems natural to me to use in poetry all the words, or any of them. Different languages give you different worldviews, and change your head, and alter the muscles in your mouth. It feels good, and you start to hear things you couldn’t hear before. It’s the thrum, the gorgeous thrum, and it gets to you in the most beautiful ways.

Because I can read poetry in Galician, in French, etc., it is only natural to want to share my wonderful experiences with my fellow writers in English. Plus, translation is impossible; it’s like skydiving without a parachute; you can’t get up from it alive, but you do. So it’s thrilling, as it puts your neurons at risk of having to find completely new possibilities.

In the mid ’80s, San Francisco poet Norma Cole was the first person to ask me to work on a poem translation; we worked on a Sebastien Smirou poem together, and on some other poems. Her generosity led me into translating more, gave me technique and questions to ask, and confidence to ask the questions of the poetic text, and try to hear its answers. I learned to listen to language because I listened to language. Only translators would know this is not a tautology! Then people started to ask me to translate difficult things. I quit my job around then, too, almost twenty-five years ago, and apprenticed under a truly great translator, Lucille (Lou) Nelson, who corrected the heck out of my commercial work until I learned enough to translate on my own. The commercial end gave me skills I could bring back to poetry, and I made a living in a way that left me some time for poetry, thank goodness.

I can’t live in just one language; Galician and French, especially, clamor in me, dream in me, think in me, push at my English, so even my English can’t become complacent. And whose English is my English anyway?

RM: It is quite a thing to go from the beginnings of learning a new language to being proficient enough in it for the sake of translation, especially literary translation. What kind of effect has your translation work had on your own work?

EM: Well don’t admire me too much! French, Galician, Portuguese, and Spanish are all romance languages, and have similar structures and stem from similar worldviews. And I was very thoroughly taught the structures of English as a schoolchild by Canadian poet Claire Harris, before she was a published poet; she came from Trinidad, and I was lucky enough to be in Grade 7 in the inner-city school where she taught. As well, you become more proficient in a language just by doing translation, and by reading. In every case, a text that you try to read teaches you about its language. You have to listen to it, and learn about the culture, and its sounds, and try to abide there till you throw off your prejudices or realize you have them. The better you can do this, the better you can begin to translate.

[It’s] hard to summarize quickly the multiple effects of translation, of translating poetry, on my own work in poetry. Clearly the poems that I translate teach me a lot about structure, sound, thinking, movement. Poetry composition moves forward partly because the sound of one word calls to mind the sounds of other words. There’s a soundscape in a poem that is part of its structure and ability to generate meanings. Because sounds of different languages are not the same, it’s hard to recreate the soundscape in another tongue. I love the challenge of that. Because languages work in different ways, different kinds of thinkings are possible, emerge in poetry, and in the world, in these different languages. There’s a lot of excitement in this.

I notice at times that monolingual people think they inhabit all of language. Poets who work in a monolingual environment tend to view the concerns and schools and currents of English-language poetry that reach us in Canada via the USA as being [all of poetry]. Books about poetics published in English only talk of works originally in English. Or, in Quebec, in French. They make statements about poetry that seem global, but really they are local statements. In my case, I’ve found much rich nourishment and much joy in poetries from South America, and from Galicia in Spain, and from Quebec and Ukraine. I’ve learned as well over time from people around me who discuss concerns in Bengali and Persian poetry, in poetries in Mandarin, and others. There are so many interesting things happening in poetries elsewhere. I translate to try to share some of that, to share difference so readers and poets can experience the joys that I do, and open up their own language and capacities in language as a result. (But it’s hard as publishers are restrained by their Canada Council funding from publishing foreign poets in Canadian translation, so we see some brave presses like Talon and BookThug publishing some new work from abroad, but not much. Getting people to read foreign works in translation is no easy thing. And I have to emigrate my own work and publish elsewhere, as my own country shackles its publishers to keep them local.)

RM: I’m fascinated by the idea of statements in English about poetry being “local statements.” I’m curious, also, as to what your engagement with translation might have taught you more specifically about writing. Is there something about the sentence or the line-break that engaging with non-English works, for example, that you might not have been introduced to otherwise?

EM: It’s not quite as simple as that. I won’t repeat what I’ve written elsewhere, for example, in Planetary Noise, in Rosalía de Castro’s Galician Songs and New Leaves, or in short essays at the end of my translations of Wilson Bueno’s Paraguayan Sea or François Turcot’s My Dinosaur.

[But] when you only read/use one language, it is like an infinity pool; you think it extends everywhere and what is visible to you seems a truth. But this may not be so. By exposure to other languages, and engagement in the work of “versing” a poem from one language and culture to another—where not only the sounds but the context and references and history are very different, so words adhere differently to other words—you learn to attend more closely to the sinews of the language in which you are writing your own work, whatever that language is. Or languages. And this attentiveness to the moments in/of language leads you to places/spaces/sounds that you would not otherwise have found. There’s no “fruit” you can pluck off the tree that is one language and just graft onto your tree. It’s more about understanding the differences in the sounds of leaves, their veins, how their stems discuss light and movement, how bugs crawl up the bark and enter or burrow, how the leaves divide and reverberate the light in different seasons, how and into what terrain do the leaves fall in autumn, how do the flakes of snow fall on them.

Also, it means attending to the political history of the tree-language and of its speakers, particularly those speakers who are furthest from the usages that capital mandates—the poor, the mystics, the silent. You learn over time how silence works in a different language, how the blank of the page therefore works differently. You learn the joy of sounds, their momentum and echoes and how they arise in conjunctions of syllables and structures, and you feel where sounds occur in the mouth, which is different in different languages. So your mouth changes, and your teeth, which changes your throat and ears and eyes. It’s a materiality at work on and in a body that never is exactly the same body from one moment to the next.

You don’t learn something for yourself by translating from another language; that’s the quickest answer to your question. Instead, you give yourself; you offer yourself over to something. To a transfer of sounds and reverberations: meanings. These meanings change you, physically. If you’re lucky, you come back to report on the text and experience; you hope to find someone to share it with. In this, I’ve been lucky!