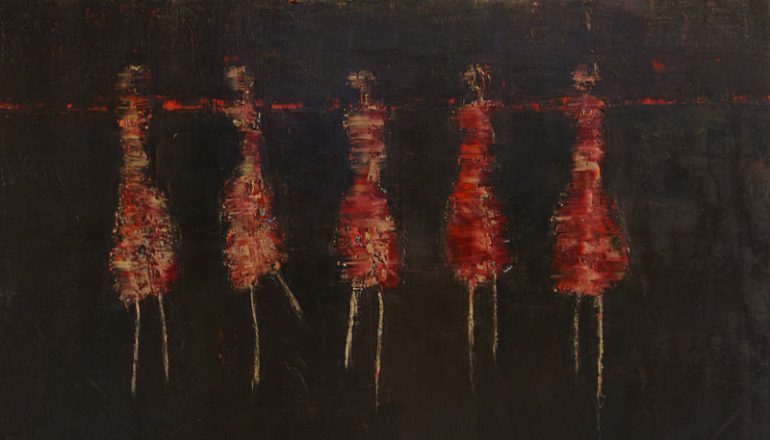 In a video on YouTube, a college-aged girl—blond hair snipped above her shoulders, wearing purple-framed glasses—clutches a doorframe. A chorus of laughter fills the opening seconds before a man behind the camera says, “Can you talk to us for just a—talk to us, Jackie.”

The video continues for nine minutes and fifty-six seconds. Throughout, the men and women behind the camera ask questions with the intention of confusing Jackie: “You’re going to teaching yesterday, right?” They laugh. Jackie struggles to speak. Her voice raises to a shrill and disconcerting pitch as she stutters, “I, I, I, I, I.”

The girl in the video is me. On camera, I am in the middle of a neurological episode, one I will not remember when I wake up later. I will not remember the laughter of my former friends, the difficulty of uttering a coherent phrase. I will not know that someone was recording me. Whenever I watch the video, one that was uploaded to YouTube in 2010, I distance who I am now from the girl on the screen as much as possible. She is “Jackie,” and I refer to her as such in my writing, hoping that separating her from me, making her an independent character, will lessen the pain of watching her friends taunt her. I am not Jackie, someone who suffers from illness, but Jacqueline, a PhD student in English, in control of both my words and my body.

Arthur Frank, while analyzing the work of Reynolds Price in The Wounded Storyteller, suggests that Price, “in thinking of himself as a new self, … has found the terms to go on living in conditions of embodiment that would have horrified his old self.” This sense of horror is one I’m familiar with: my former self, a Division I cross country athlete, felt like she woke up into a nightmare when, at eighteen years old, she experienced her first neurological episode. When I consider “Jackie” as solely an instrument to express fear, however, I pause. The more I write her into my work, the more kaleidoscopic she becomes: she is a wisp of memory, a vessel for grief, and a way into a wound. When examining scenes in other texts, such as Cathy Crimmins’s Where Is the Mango Princess?, Jean-Dominique Bauby’s The Diving Bell and the Butterfly, and Plaintext by Nancy Mairs, the reasons for creating a character outside oneself become nuanced and plentiful.

In Where Is the Mango Princess?, after Cathy Crimmins’s husband, Alan, suffers a traumatic brain injury, Crimmins separates their life into “the great Before and After.” This clear divide between their old life and their new one reflects the significant shift in personhood that Alan experiences as a result of his TBI. Though Crimmins is penning the memoir, Alan vocalizes his conception of a second self several times throughout the book. While in the hospital visiting with friends, he explains, “I’m talking about a second Alan Forman, who could just hang out in the universe. What do you think? And what do you think about the defective Alan Forman? Should he really have a right to exist in the universe?” He references himself—his current, physical self in the hospital—as “defective” in this situation, and persists in saying that Alan, an imagined, pre-accident version of himself, “could decide if the defective Alan Forman still had a right to live in the universe.”

Because of his brain injury, Crimmins writes, Alan in the hospital is not able to conceptualize or remember the boat accident that left him with a TBI. This creation of another Alan is the first we see as readers of the physically present Alan dealing with the immense grief and disorientation that arises from acknowledgement of his former identity and of his life’s traumatic alteration. His depiction of himself as “defective” is heart-wrenching to read but offers insight to a private dialogue occurring between his past and current self. His deliberation over whether or not he has a “right to live in the universe” is evidence of a grief for his former self, as well as of the necessity for him to understand the world in new terms as a result of his injury. Alan’s conversation with alternate Alan initially seems to be one rife with loss, but it also, in a way, becomes a source of optimism. His construction of his alternate persona demonstrates his ability to narrativize his experience, and to begin grappling with the gaping hole at the center of his identity.

Jean-Dominique Bauby experiences a similar sudden shift in his life when he experiences a massive stroke and is left with locked-in syndrome, an experience he chronicles in The Diving Bell and the Butterfly. After his stroke, his only mode of communication comes from blinking his left eye. As a demonstration of how life-altering his circumstances are, he writes that, in the hospital, he sees a man in a mirror “who seem[s] to have emerged from a vat of formaldehyde. His mouth [i]s twisted, his nose damaged, his hair tousled, his gaze full of fear.” Several moments pass before Bauby realizes he is looking at himself. Locked-in syndrome leaves him as, what he describes, “a rough sketch, a shadow, a tiny fragment” of who he used to be as a father and a man. Throughout the book, which is laced with many moments of unexpected joy, Bauby takes refuge in the rich inner life of his mind.

In one part of the memoir, Bauby expresses his desire to write a play one day, one he considers titling The Pressure Cooker, The Eye, or The Diving Bell. The plot and setting, an obvious retelling of his own experience, would be “a hospital room in which Mr. L., a family man in the prime of his life, is learning to live with locked-in syndrome.” Bauby’s decision to name himself “Mr. L.” in his play signals Bauby’s desire to create a new version of himself, enabling him to star as protagonist of an alternative narrative. Mr. L is characterized as “ambitious, somewhat cynical, heretofore a stranger to failure,” which is how Bauby describes his hospitalized self throughout his memoir. However, there’s a divergence between reality and the final scene of the play, one in which “Mr. L., inert since the curtain first rose, throws aside sheets and blankets, jumps from the bed, and walks around the eerily lit stage.” This moment of triumph is one in which Bauby allows himself to envision a moment that will not occur in his actual lifetime. In one final, biting line, he undercuts the miraculous nature of the play’s ending by writing, “Then it grows dark again, and you hear the voice offstage—Mr. L.’s inner voice—one last time: ‘Damn! It was only a dream!’” Bauby chooses not to write a soaring end that assures readers that the protagonist has conquered the failings of their body (as is common in so many illness narratives) and, instead, wields humor. By resisting a stereotypical—and, frankly, hollow—narrative of full recovery, Bauby enables readers to delight in the delectable inner workings of his mind rather than relying on a restoration of his former physical abilities as a means to find fulfillment.

While Alan and Bauby grapple with definitive schisms between their former and present selves, Nancy Mairs writes about her experiences with multiple sclerosis, a disease with symptoms that progressively—and unpredictably—grow worse over time. Mairs’s response to her perpetually evolving condition is not to craft only one alternative character but to engage with a variety of selves, both conjured from her past and envisioned in the future. Susannah B. Mintz, in Unruly Bodies, writes that Mairs responds to illness and refutes patriarchal discourse with her “tactically polyvocal style, heteroglossic within essays (conversing with different ‘selves’ through diaries, old essays, photographs of herself, and so on) and destabilizing across essays (the book’s temporal looping, its refusal to collate individual pieces into a single life trajectory).” In her essay “On Loving Men,” for example, Mairs, while reading her past diaries, writes that “the woman scribbling those pages … seems very far away … I find it hard to believe that I bear her.” While Mairs remembers the relationship with the man penned in her diaries, she expresses a disconnect between her diary and present self, not only physically but also in terms of identity. Subsequently, deep personal reflection becomes possible.

Examining the past is fruitful for Mairs, but so is her forecasting of the future. In her essay “On Being a Cripple,” she considers suicide while she is still physically able, before realizing that “the Nancy who might one day lie inert under a bedsheet, arms and legs paralyzed, unable to feed or bathe herself, unable to reach out for a gun, a bottle of pills, was not the Nancy I was at present, and that [she] could not presume to make decisions for that future Nancy, who might well not want in the least to die.” By considering future Nancy as her own individual, Mairs offers her future self agency in the making of decisions, trusting that as the landscape of her illness changes, she might change as well. Like Bauby, she does not suggest to the reader that she will one day conquer illness and emerge triumphant. Instead, in these explorations of identity, Mairs finds a means of empowerment while still recognizing the difficulties related to her condition. Her ability to envision a future self becomes a means of sustaining hope. In Mairs’s own words: “I have always had to tell myself the story of myself in order to sense a self at all.”

It is clear, when analyzing these narratives and considering my own, that there is benefit in creating multiple selves in order to process trauma, distance oneself from illness, and imagine an alternative reality as a means of coping. There is also power in naming oneself, especially after illness or injury. The creation of another self allows for agency when coping with uncontrollable circumstances, and even allows for joy in an imagined other self. But there are dangers too. Arthur Frank notes that “there may be a cast of varied selves, but there seems to be only one body; how many selves can this one body support?”

I ask myself this same question when I watch the video of Jackie being taunted. I try to convince myself that the girl on screen is far from me in time and identity, but my body holds trauma from that time. As much as I write—and live—as though I can separate myself into multiple selves, there are times when the illusion cracks, and I am left grappling still with the enormous impact that illness—and people’s treatment of me during illness—has had on my identity. When I feel powerless to the failings of my body, as sometimes I do, writing, as it is for the authors in this piece, is a means of shaping a narrative I want to live within.