Home
»
Uncategorized
»
My One-Handed Novel; Or, How I am Learning to Be Both a Parent and a Writer 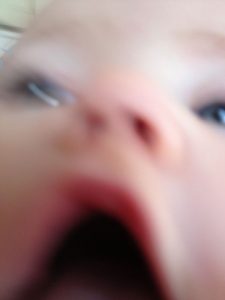 Despite sometimes-embarrassing attempts at guitar, drums, and bass in my youth, I’m no musician. But if I’m honest, some of the best things I’ve written lately have not been stories or novel chapters, but songs. These are all a capella, all very short, and all written with a very specific audience in mind: my ten month old daughter. Selected titles include “Red Eye Flight to Sleepytown,” “Monkey, Monkey, You Swung Into My Life,” “Such Big Farts For Such a Little Monkey,” and “Making a Sandwich for Mommy”—that last one being a jazzy Van Morrison-esque bit of lunchtime stream-of-consciousness.

I know that—the music industry being in such a state of flux—these songs will probably not gain the recognition they so obviously deserve. So meanwhile I continue to toil away at book projects. (Because, you know, publishing is so stable.) But I’ve found that while fatherhood has been a boon for my songwriting, it is sometimes less kind to my literary pursuits.

My daughter is not a good sleeper, and for the first seven months of her life it was next to impossible to get her to nap on her own. Which meant my wife or I held her. Most of the time this was not a sacrifice; we cherished every moment with her and cradling her tiny body seemed like a gift, an honor. Plus, we were sometimes able to get in a little reading… If we turned the pages very, very quietly. We took the sleeping difficulty as a payment, though: in every other aspect she was a wonderful and easy-going child, with an early-blooming smile and an infectious laugh.

Luckily we have also been blessed with a couch that has wide, flat arms perfect for safely placing a laptop computer, so over the past ten months I have still managed to get some work done: penning a couple essays, posting a handful of these Ploughshares blog scribblings, and laboring through a third (okay, a quarter) of a novel draft. And most of this was done with one hand—the other tucked beneath the cutest damn baby ever to log-roll across God’s green earth.

But I’ll admit that this isn’t the most efficient way to get work done. Even though we’ve solved (okay, mostly solved) our sleeping issues, there are always new challenges with each new day, and many of those challenges keep me from writing as much as I’d otherwise like. So how do we write and parent? 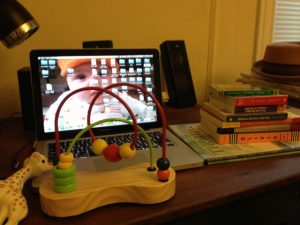 We didn’t talk much about parenting while in grad school, even though I knew a number of people with children. Likely I wouldn’t have heard it anyway. This just isn’t something you really pay attention to until you are in the thick of it. It is like hearing about someone else’s challenging life in a foreign and difficult land: you think, “Oh, that’s very interesting,” but then later when you find yourself living in this foreign and difficult land, you think, “Oh, shit, I need to figure out how to survive here.”

The topic, it seems, has been coming up more and more recently. I know of at least three AWP conference panel proposals being considered that touch on the difficulties of parenting and trying to build and maintain a writing career. Poets & Writers recently offered a cover story on “Books and Babies,” and at the Virginia Quarterly site, Becky Tuch posted a response that wonders more about the financial lives of writer-parents: how does the average writer afford children?

I know writer-parents who have taken time away from literary pursuits to spend it with the kids, and others who get daily childcare help from family members. I know some whose writing careers have been derailed by children, and others whose work has flourished. I know a few who have been able to balance writing, childcare, and tenure-track teaching positions, and far too many who struggle to pay for their kids’ new sneakers with their meager adjuncting paychecks. I know of situations where couples balance childcare responsibilities (or do their best to anyway), and I know of others where one parent (usually the mother) takes on the bulk of these duties.

In upcoming posts I’ll touch on a number of these concerns, but for now I wanted to simply reach out to a few people with experience at both the writing and parenting games and asked them, “What is something that has helped you to be both a writer and a parent?” Here’s what I got back…

“Being married to a writer who is also the parent is the biggest explanation for me or Robert [Boswell] ever getting a word written the first ten years of our children’s lives. We traded off the time to write and took the kids out and about, leaving each other with hours. We gave the writing and the parenting equal priority. We also hired a housekeeper. Way more effective than a marriage counselor. Way.” —Antonya Nelson, parent and author of Bound and Some Fun

“Scheduling has become all important for me as a writer. I used to spend six to eight hours sitting at my desk and produce less writing than I do now that I have no more than two hours carved out each weekday.” —Victor LaValle, parent and author of The Devil in Silver and Big Machine

“I wouldn’t get anything done without colony stays. And parents tend to work harder and faster at colonies than almost anyone else, because we’re so used to going into turbo-mode whenever we get ten seconds to write. So you give us sixteen hours a day for two or more weeks, and we end up with finished drafts and carpal tunnel syndrome. I’ll add that it’s not just the time—I think the ability to detach from your life is so important. If I have to write something really disturbing, or violent, or sexual, it’s helpful not to have anyone call me Mommy for a few days.” —Rebecca Makkai, parent and author of The Borrower

“My primary parenting strategy when our children were small was one at which I excelled—the exhibition of incompetence: when I carried them to bed, I was the clumsy guy, who bounced into walls and almost fell a hundred times; when I told them stories, I’d tell them a story they knew well and get all of the parts wrong, which they would correct, and eventually they’d tell the story to me; when I cooked for them, I’d predict catastrophe and ask if I should add some ridiculous ingredient (such as shoes) to correct the meal; when I drove them about, I’d pretend that I was lost and ask absurd questions about the secret movement of mountains, river, city, moon.” —Robert Boswell, parent and author of Tumbledown and The Heyday of the Insensitive Bastards

“Before my daughter was born, I noodled around a lot more with projects, took my time. Now that I have to pay for a sitter to get that time, I tend to use it much more productively. I wrote my entire second novel starting when my daughter was about six months old.” —Rebecca Johns Trissler, parent and author of The Countess and Icebergs

“I no longer need to have particular music, or coffee, or a given time of day. I can write a lot more in 15 minutes than I could in grad school. And I’ve learned to crave quiet, however and whenever it comes, because if there’s some quiet—even while washing dishes, say—then I can dream on what I’m writing.” —Mia Alvarado, parent and author of Hey Folly

“I’m a much, much more efficient writer than I used to be. I just don’t have the time to screw around and check facebook and text people about where we’re going this weekend…I wrote 1,000 words at Ben’s track practice last night, sitting at a picnic table. I never would have been able to work in that environment before, but now I don’t really have a choice, so I do it.” —Dave Housley, parent and author of Ryan Seacrest is Famous

“When I was deciding whether or not to pursue a doctorate, I stayed in the guest apartment of Julianna Baggott and Dave Scott’s house in Tallahassee. What I saw was this wonderful working family, with parents making sandwiches for school, arranging carpool duty for soccer practice, setting aside space in the house for the kids to have art projects. It sounds ridiculous, but I never knew the writing life could, at least on the outside, look so normal. That was thrilling for me. It made the whole project of parenting seem reasonable, and that’s a tremendous gift to give someone.” —Steve Kistulentz, parent and author of The Luckless Age and Little Black Daydream

“I don’t try to write while I am parenting, and I don’t try to parent while I am writing. I spend most of my writing time away from home, even when my children are in school, so that I’m not distracted by their stuff, their mess, impending appointments I must remember, groceries I must buy, and so on and so forth. I carve time out of each day to be away for this, when my only priority is getting words on the paper. And when I am parenting, I don’t think about writing. I put my computer away and don’t open it again until the children are in bed.” —Lacy M. Johnson, parent and author of Trespasses

“Imagination. I need it to write. I need it to father. I need to write stories and essays to survive as an artist, but I’ve also needed stories to survive long drives in the car, long hikes in the woods, and those last moments of the day in which my son can’t go to sleep unless he hears a story. Also, I once told my son that there was a monster in the attic that could smell his tears, so he’d better not cry. And yes, amazingly, he still loves me (or says he does).” —Matthew Vollmer, parent and author of Future Missionaries of America and Inscriptions for Headstones

What about you, readers? If you’re both a writer and a parent, how have you balanced the two?