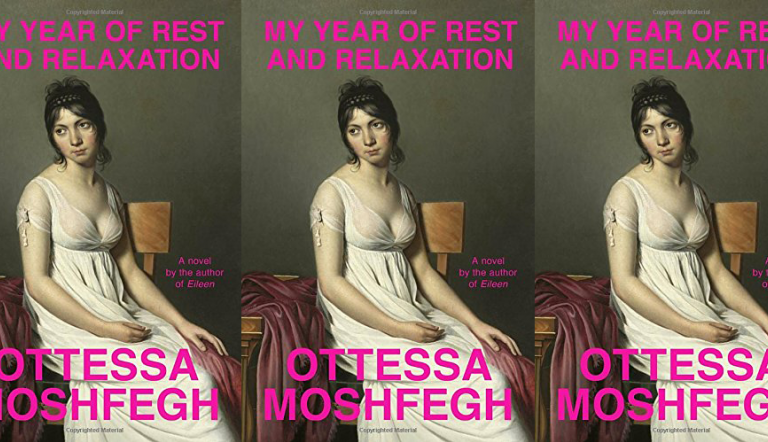 In Ottessa Moshfegh’s latest novel, My Year of Rest and Relaxation, she uses the optimism of new-millennium New York to explore isolation, cultural emptiness, and the complexity of female friendships in a biting and detailed way. Moshfegh’s narrator is a twenty-five-year-old Columbia graduate who sets off on a mission of great ambition: to hibernate for a full year via a battery of heavy-duty psychopharmaceuticals. Rather than dive into examining the unhappiness she’s feeling, Moshfegh introduces the reader to a series of people who have let her down, bringing in deceased, neglectful parents, a priggish ex-boyfriend, and Reva, an upbeat, bulimic socializer who wears happiness as a mask to hide her disappointment. In their lack of self-awareness, these characters bolster the narrator’s sense of isolation, which encourages her to try and emotionally disconnect from anything resembling love or support.

After the narrator begins self-medicating, Moshfegh starts experimenting with tone, juxtaposing hope and horror as Ambien leads the narrator to seek connections in pervy chat rooms and order clothes, inviting the reader to recognize that deep down, the narrator does crave connection, though she can only try to while unconscious. Upon waking up, the narrator is terrified and unsettled by the pictures of genitals populating her screen and the designer items she has no memory of ordering. Precautions to curtail her sleeping behavior (sealing her phone in Tupperware and hiding her laptop) don’t work, and her voracious desire for connection leads her to go clubbing and karaoke-ing with Ping Xi, an artist who kills and stuffs dogs for a show at the gallery that fires her (in a scene of great comedy, the narrator defecates on the floor of the gallery and stuffs the excrement in one of the dog’s mouths). When she comes to and finds pictures from the evening, the unnerving experience of living life without remembering drives her to swap out Ambien for Infermiterol.

After this decision, the larger ambitions of Moshfegh’s work come into focus. Prior to the narrator’s switch to Infermiterol, Moshfegh largely uses Reva, the narrator’s self-appointed best friend, as a way to show the passage of time—she shows up in the narrator’s apartment, complains, and drinks, her unhappiness providing a dull soundtrack for the narrator to fall asleep to. The narrator both needs and hates Reva, rejecting her for wanting to be well-adjusted, while recognizing her usefulness for both keeping her grounded and reminding her that she can be loved. A typical exchange, pre-Infermiterol, goes like this:

“And come out to Saints with me. It’s ladies’ night. Girls drink for free until eleven. You’ll feel so much better about yourself.” She was an expert at conflating canned advice with any excuse for drinking to oblivion.

She looked down at her hands, fiddled with her rings, scratched her neck, then stared down at the floor.

“I miss you,” she said, her voice cracking a little. Maybe she thought those words would break through to my heart. I’d been taking Nembutals all day.

Here, the narrator shrugs off Reva’s attempts at making her sociable, to the point where she refuses to attend Reva’s mother’s funeral. After switching the medication, however, the narrator wakes up to find herself en route to Reva’s hometown in Long Island, dressed up and ready to faux mourn. Once there, the narrator’s reluctance to participate and console is met with gratitude and enthusiasm, as Reva, in her inability to articulate anything negative, uses her friend as an excuse to abandon her family and mourn in her own way. Moshfegh is careful not to overplay the complexities of Reva’s decision, nor does she offer any meaningful exchange between Reva and the narrator to suggest a deeper value to their friendship. Reva uses the narrator to make herself feel negatively so that she has permission to be bulimic and miserable. In contrast, the narrator relies on Reva’s love to push herself to self-medicate, putting the narrator in the only state that will get her closer to (maybe) returning a small amount of that love. In Moshfegh’s no-bullshit approach, female friendship is scrutinized not to find genuine affection but to recognize how different personalities can embolden one’s ability to give into their emotional addictions.

Moshfegh is deliberate in the pacing of her exploration of the complicated friendships adult women can have, leading the novel to play out like Donald Antrim’s The Hundred Brothers in both its handling of relationships and its ability to sustain interest despite repetition and a small-scale approach to setting. Like Antrim, Moshfegh doubles down on a sense of surreality toward the end, replacing the eerie Corn King with a door that locks from the outside. After cutting ties with Reva in order to truly hibernate, the narrator wakes up just before September 11, and Reva happens to work at the World Trade Center. While the novel closes with the narrator recording and obsessively re-watching the news coverage of the day, the novel isn’t in conversation with the politics or culture of the day. Instead, Moshfegh uses the tragedy as a way to resolve the relationship between the narrator and Reva, having the narrator re-watch a Reva-looking woman plummet from a high floor and noting that “she is beautiful. There she is, a human being, diving into the unknown, and she is wide awake.”

Tags:Donald Antrim, My Year of Rest and Relaxation, Ottessa Moshfegh, The Hundred Brothers