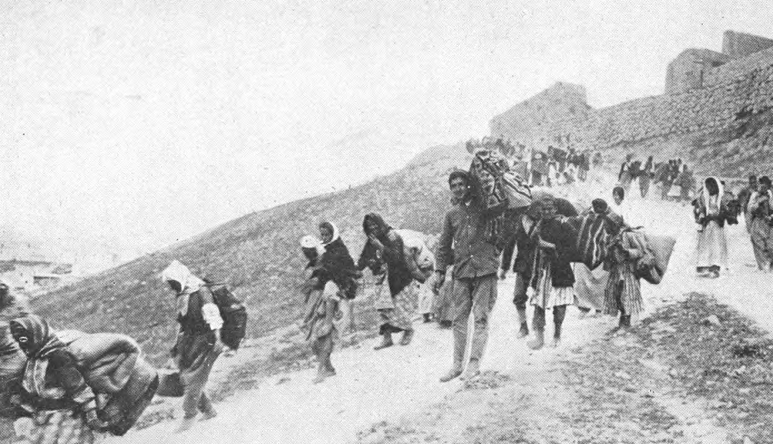 Regardless of genre, Armenian diaspora narratives are often tasked with offering educational historical information in a digestible and engaging format. For Armenian-American artists in particular, writing about displacement begins in April 1915, when more than 230 Armenian intellectuals were arrested and eventually murdered. This is widely regarded as the beginning of the Armenian Genocide, a period during the decay of the Ottoman Empire when the Turkish government systematically exterminated approximately 1.5 million Armenians. Yet, since these events are not commonly known known to many Americans, if not entirely unfamiliar, there is an unspoken onus on the writer to educate readers. The storyteller (or in this case the essayist) takes on the role of a de facto teacher. The difficulty then lies equally in providing a precise, detailed account of unknown, large-scale historical events and contextualizing the present-day implications of mass atrocities that took place more than a century ago. Multigenerational narratives thereby become a natural route for Armenian diaspora writers to illustrate the tribulations of leaving their homeland. Whereas, the average American consumer can likely approach stories about the Holocaust or Civil War with some prior knowledge, the Armenian Genocide requires more grounding, both factual and emotional.

Transgenerational trauma, or the transmission of trauma—a term used in psychology to describe emotional duress and grief that is passed from one generation to the next—has inherent literary currency in Armenian-American writing. Short- and long-term fallout from the genocide, general ethnic ambiguity, and ongoing unawareness of Armenian history in the United States create a confusing middle ground of ethnic identity for the Armenian-American community and prevent current generations from finding a sense of historical closure. Hence, Armenian-American writers recognize the social and cultural value of passing on ancestral stories, and use a set of specific narrative devices to impart that value on the page.

Peter Balakian’s memoir, Black Dog of Fate, is a cornerstone text in examining the transmission of trauma and demonstrates how to effectively build an educational multigenerational narrative. Balakian suggests that understanding his family’s ethnic cultural identity was integral to his growth as an artist. His Armenian heritage is apparent in much of his poetry, including his recent Pulitzer Prize-winning collection Ozone Journal, but his heavily researched nonfiction has brought Armenian history to a much larger audience. Growing up in New Jersey, Balakian’s Armenian ethnic identity was emphasized in the household, while more traditional American culture factored into his day-to-day interactions in public. At home, despite perpetuating Armenian culture, his family history was taboo subject matter. Older relatives were generally unwilling to discuss the horrors that led to fleeing their home country. Thus, Balakian had to discover the bulk of his family history through individual research. In Black Dog of Fate, this structure of self-discovery is an ideal conduit for interlaying significant facts about the Armenian genocide among the personal anecdotes expected of a memoir. Balakian must unravel the secrets of his family’s past, including learning that his grandmother was a sole family survivor of the genocide. His research, catalyzed by curiosity, brings him to the original point of his inherited trauma, i.e., the massacre of his grandmother’s family, and reveals why he had never felt completely normal within American culture.

This narrative form grants Balakian esoteric artistic advantages. In a 2003 interview with the Cortland Review, he notes, “To inherit the diasporan condition has a potentially rich effect on the imagination. It allows one to live in the domain of two cultures, sometimes simultaneously.” He later adds, “I think that the receiving and transmission of trauma across generations is powerful and important and gives a poet imaginative ranges that he might not otherwise have.”

Occupying two cultural domains also reinforces the need for a multigenerational structure. Understanding how the involuntarily displaced embody and relate to their ethnic culture demands returning to the place of origin. The imaginative boon Balakian suggests transgenerational trauma provides can only exist through the transference from past generations. The current storyline must coexist alongside the original trauma narrative for the former to make sense and hold the same significance.

Numerous contemporary Armenian-American fiction writers, such as Chris Bohjalian, Carol Edgarian, and Aline Ohanesian, have utilized similar structures. It’s worth noting Edgarian’s debut novel, Rise the Euphrates, was published prior to Balakian’s memoir, but uses a more linear chronology. However, two recent novels, Chris Bohjalian’s bestseller The Sandcastle Girls (2012) and Aline Ohanesian’s Orhan’s Inheritance (2015), are both scaffolded by the self-discovery structure, and begin with present-day protagonists finding themselves in unexpected situations that trigger a need to understand an unknown family history related to the Armenian genocide. By interweaving flashbacks from previous generations, the protagonist and reader learn intimately personal and macrocosmic historical information simultaneously. In other words, the protagonist finding out about their ethnic history becomes integral to the larger plot and, again, gives the author freedom to relay information about the genocide. The personal hardships and brutalities faced by main characters serve as an approachable venue for discussing unfathomable atrocities.

Familial and romantic loves also provide an important counterbalance to the realities of massive tragedies. For example, The Sandcastle Girls begins with a present-day first-person narrator who can offer facts about the Armenian genocide directly, but the earliest storyline, taking place during the fall of the Ottoman Empire, is told in third-person omniscient, which requires a different tact. Over email, Chris Bohjalian explained, “I made the third person part of the novel a love story because no one was going to read my novel if it was only about 1.5 million dead in the desert. But we all love sweeping, epic love stories set in the midst of war.” The love story gives readers a plotline that’s perhaps easier to invest in, and offers empathic value that statistics are often incapable of achieving.

Of course, while Armenian diaspora narratives face esoteric challenges, transgenerational trauma is not unique to a singular ethnic group. A variety of other structures effectively demonstrate how grief can be passed from one generation to the next. Yaa Gyasi’s Homegoing, for example, is built around a linear family tree, offering a chronological narrative spanning centuries of slavery and racial violence. Indeed, Gyasi masterfully develops a vast multigenerational saga that makes the transmission of trauma simple to recognize. In an interview with ZZYZVA, Gyasi said, “The accumulation of all of the chapters was more important to me than the individual chapters.” (The entire interview is well worth the read). In Middlesex, Jeffrey Eugenides implements an interwoven narrative similar to the model common in Armenian-American literature, but genetics plays a more fundamental role in how the trauma of previous generations affects the protagonist.

Furthermore, Armenian diaspora writers are particularly prone to multigenerational stories because the Armenian genocide is still not widely recognized. Under President Recep Tayyip Erdoğan, Turkey continues to deny any wrongdoing using wide-ranging propaganda, and strong-arms countries such as the United States into avoiding acknowledgment with geopolitical leverage. For this reason, Armenian-American fiction has high expectations of factual accountability. Bohjalian said, “You never want to wake the reader from the fictional dream with falsity or inaccuracy. That is especially true when writing about the Armenian genocide, given Turkey’s long history of denial. You have to get the facts right. And your fictional characters have to exist in a precise and accountable historical reality.”

According to the Committee to Protect Journalists, Turkey imprisoned far more reporters in 2016 than any other nation and continues to quash press freedoms today. Acknowledging the Armenian genocide is still a punishable offense. Writing about past human rights violations and genocide denial has imperative historical and social importance. Armenian-American writers continue to provide historical accounts of mass murder and displacement to intentionally pass on information that would otherwise be erased and forgotten.

Additionally, the century-long struggle for acknowledgment serves as a critical example of the value of art in keeping significant past events on the spectrum of public awareness. Combined, Balakian, Bohjalian, Edgarian, and Ohanesian account for millions of book sales worldwide and have been widely translated, providing readers across the globe with vital perspectives on their ethnic history. In the era of misinformation, this kind of storytelling is more important than ever, especially as claims of fake news are used as a guise to cover up human rights violations such as ethnic cleansing in Myanmar and a murderous drug war in the Philippines. In such dire circumstances, journalists are of course of the utmost importance. However, memoirs, historical novels, and other personal accounts are often by nature more permanent in pop culture. Journalism is by no means ephemeral, but many articles risk getting lost in the deluge of news, whereas a cultural artifact such as The Diary of Anne Frank can become an enduring educational tool, specifically outside of academia.

The transgenerational trauma narrative by definition reveals the distant repercussions of current events and the personal toll of mass atrocities. Armenian diaspora literature seeks to convey ancestral inheritance and prevent the erasure of one of the largest genocides in recent history.

Aram Mrjoian is a former contributor at Book Riot and current contributor at the Chicago Review of Books. His writing has appeared or is forthcoming in The Millions, Kenyon Review online, Joyland, Colorado Review, Gigantic Sequins, Tahoma Literary Review, The Masters Review, and many other publications. He is currently working toward his MFA in creative writing at Northwestern University, where he is the Assistant Managing Editor at TriQuarterly. Find his work at arammrjoian.com