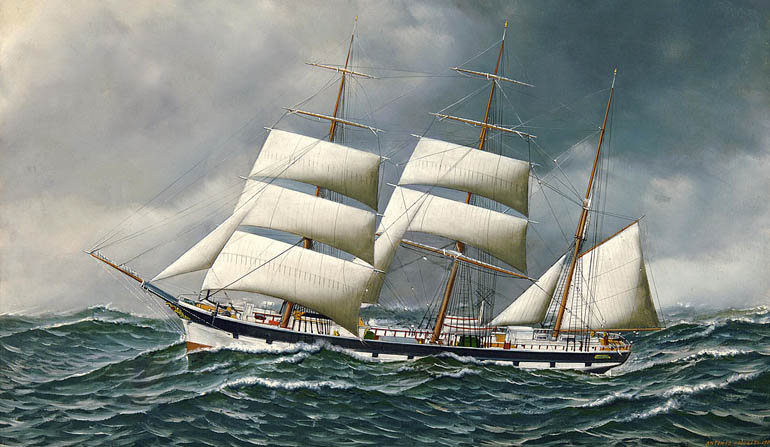 I stop when I run into god in a poem. The word, the idea, the immensity of dogma, spirituality, and history that the word god contains never fails to remove me from the experience of reading a poem. I need a pause to adjust myself accordingly around whichever notion of god a poet might be employing before continuing on. I’m not completely turned off when I see the word “god” in a poem, but it does spark a deep-seated skepticism, both of the poem, and of the poet’s motives.

Lucky for me, I was driving the first time I heard Tomaz Salamun’s poem “Ships” on Poetry off the Shelf, the Poetry Foundation’s podcast. I didn’t have the chance to glance at the poem’s first line, “I’m religious,” and decide whether or not to read it. It was just me, driving in my car, listening to Matthew Zapruder talk poetry with Curtis Fox. I was my own captive audience, and anyway, by the second line, “As religious as the wind or scissors,” I was hooked. I reached to my phone not to skip ahead, but to replay Zapruder’s reading of the poem.

I admire a poem that challenges the reader head on, as this one surely does. The title, “Ships,” seems benign, but the poem’s first line takes a huge risk in alienating readers. And I should say that it’s not that I think Salamun is waving a flag to welcome believers, either. The statement “I’m religious” is bold, almost arrogant: it requires a response. So perhaps because Salamun has already given something soft in both the music and the image of the titular word, ships, the audacious first line can offer more intrigue than estrangement. Already, the poet has delivered his argument and illustrated the energy of his language.

In an effort of full disclosure, I am a respectful and tirelessly curious nonbeliever. That being said, I have a penchant for the surreal, the way art can’t and doesn’t seem to want to deny the supernatural. While I don’t believe in any god, I do believe wholeheartedly in what we do not know. By that I mean I find solace in not having answers. My essential good feelings come from wonder, from trying to detach myself from the very human habit of clinging to knowledge, to the false security we feel when we place ourselves within the confines of being right. I like surprises, I welcome falling apart, I have a voracious appetite for poetry.

By the second line of “Ships,” “As religious as the wind or scissors,” the poem has a pulse, with each line expanding ideas of the sacred beyond traditional dogmas, into surrealism, nature, archetype, self, mortality. Yet still the word religious persists, is repeated, never fully contradicted or denied, “It’s an ant, she’s religious, the flowers are red. / I don’t want to die. I don’t care if I die now. / I’m more religious than the dust in the desert.” The end-stopped lines offer what seems like steady footing, but I can’t distinguish whether this is a language of ecstasy or pain.

Robert Hass has said of Salamun’s poems, that they adhere to a “tradition in which poetry is an instrument for glimpsing a supreme reality.” And Salamun himself has said, “Poetry is a parallel process to spiritual development. . . . As in religion, you are trained how to be with the world as long as you can endure it.” To marry these sentiments is to say that by enduring the world, by intentionally enlarging your capacity to endure the world, you might be offered glimpses into a supreme reality. This might be exactly where poetry and spirituality align: in intention and in practice.

What other language do we have to uncover the concept of the human soul? In the lines in the latter half of “Ships,” “Sometimes I think I baked nettles, but / I didn’t. Sometimes I think I’m miserable, but / I’m not. / I’m religious,” the word religious seems to stand for an acknowledgement of being alive. In Salamun’s language, attachment to meaning dissolves as words and images expand and contract. In his own words, Salamun has described poetic intention “like a dolphin, it is pure grace, you just follow grace, and you have this feeling of water and light.” In getting past the suppositions I carry about godliness, past my skepticism, and into the challenges of the poem and the poet who employ religiosity, there is grace to be had.