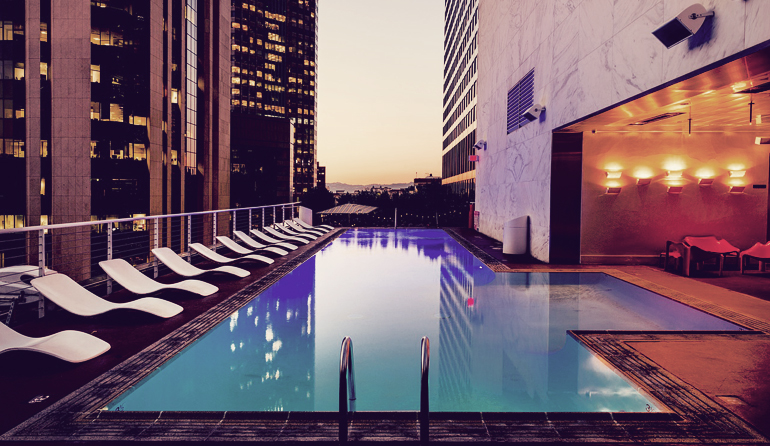 Neil Gaiman’s “The Goldfish Pool and Other Stories” is a story that should not work. Gaiman states almost as much in the introduction to the collection, Smoke and Mirrors, that houses the story: “I wrote it higgledy-piggledy on a battered Atari Portfolio palmtop, on planes and in cars and hotel rooms, all out of order, jotting down conversations and imaginary meetings until I was fairly sure it was all written. Then I put the material I had in order and was astonished and delighted that it worked.” It’s a story about Hollywood and writing. It’s a story that meanders with almost no sense of plot. Yet, it works.

In the story the narrator is a young writer brought to LA to write a treatment based on his novel. He stays at a rundown hotel, the one in which (as every person he meets rushes to tell him) John Belushi died, and has endless meetings with a comically ever-shifting roster of movie execs who tell him how to fix his story with stranger and stranger results. Meanwhile, he talks to the hotel’s groundskeeper about old Hollywood stars, works on a story about stage magicians and two particular magic tricks he finds fascinating, has strange dreams, and takes walks near the carp pond outside the hotel. The plot sounds like the sort of aimless and pretentious indie film that would rightfully be groaned at for its cliché. Yet, again, somehow the story works.

Gaiman captures a sense of the loneliness and befuddlement of writing: the writer meanders and wanders from one spot in the story to the next, he has conversations that seem oddly weighted and jarring, he spends a long time thinking about unconnected fragments of information that he becomes interested in (the magic tricks, the old Hollywood star the groundskeeper kept a scrapbook of), and somehow every piece adds up to more than it should. This easily could be a purely comedic story about a writer seeing their idea turned into mush by too many cooks (or in this case movie execs) who all have a different idea of what sells. It could be a story about the transitory spaces of hotels and the liminality of stardom. It could be a story about a writer who finds his way to a story he didn’t mean to write. Somehow it’s a story that is all of those things and none of them. It’s a story about writing not working and writing that is working. It’s a story about how the space between those two things is a kind of magician’s patter leading up to the moment when the magician pulls everything off.

Gaiman pulls the story off in surprising ways. He embraces the clichés of Hollywood (the wise old groundskeeper, the young and clueless execs) in a way that never feels like he’s making fun of the characters or situation (the execs are clueless and comical, but it’s more like they’re playing their role than doing it because they don’t know any better).

Gaiman also uses disconnection deftly. While the plot of the story seems aimless, it feels purposeful within the structure of the story, which mimics that aimlessness through ending scenes often sooner than the reader expects and floating between them in a way that makes no scene feel more heavily weighted than its surrounding ones. This disconnection feels appropriate to the liminal space of the hotel and the liminal space a writer finds themselves in when working on a piece of writing.

When the narrator writes something new finally, a poem that he’s not even sure is any good, it has a thrill and magic to it. The same can be said of Gaiman’s story, which floats higgledy-piggledy between falling apart and somehow feeling complete and true to the pursuit of story.

Tags:Neil Gaiman, Smoke and Mirrors, The Goldfish Pool and Other Stories