Home
»
Uncategorized
»
The Ploughshares Round-Down: “The Wolf of Wall Street” and Its Backlash 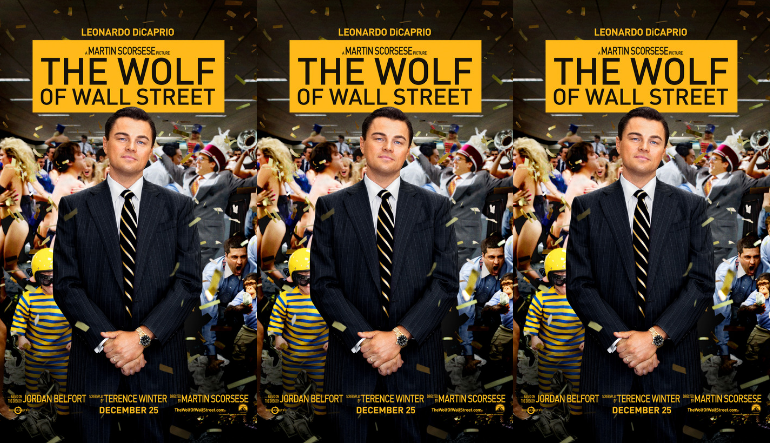 Okay writers, it’s 2014. And what better way start a new year than with an enormous media controversy surrounding a Scorcese film? I KNOW: perfect.

If you’ve missed it (I’m sure you’ve had your noses to the ol’ writing grindstone), here’s the deal:

The Wolf of Wall Street is a Martin Scorcese film based on a true story. In it, Leonardo DiCaprio plays the debauched Jordan Belfort, who got his start “peddling penny stocks to the poor and desperate,” and wound up swindling over $100 million from thousands of investors—many of whom didn’t recover. But apparently criminal schemes and unconscionable excesses make for good cinema; The Guardian described the film as “throwing off sparks,” and luring viewers with its “infectious fun.” Hooray!

Except that the “fun” this movie has via Jordan Belfort’s despicable behavior is creating a massive uproar. Does it glamorize criminality? Minimize suffering? Or merely testify to reality? The debate has implications for storytellers everywhere, so I’m bringing you into the fray.

Columnists have accused! Bloggers have ranted! Moviegoers have walked out! This makes for a mid-January win for all of us. Read up, weigh in, and then go write your way into controversy.

McDowell (then Prousalis) with her father and his private plane

First came an open letter from actress Christina McDowell. She’s the daughter of Tom Prousalis—a previous associate of Jordan Belfort, the Wolf of Wall Street protagonist. Prousalis got rich via myriad financial crimes, and he also stole his own daughter’s—McDowell’s—identity, in order to launder money. (IKR?) So um, no surprise, McDowell is furious about the film.

Her letter accuses Scorcese and DiCaprio of “exacerbating our national obsession with wealth and status and glorifying greed and psychopathic behaviour.” In the name of “entertainment,” she suggests, Belfort’s crimes will now/again make him wealthy, while his victims wait in vain for recompense. “You people are dangerous,” she writes:

Your film is a reckless attempt at continuing to pretend that these sorts of schemes are entertaining, even as the country is reeling from yet another round of Wall Street scandals.

And then there’s the “brutal heckling” Scorcese’s been getting; the “10 Reasons the Real Life ‘Wolf of Wall Street’ Is a Schmuck Who Shouldn’t Be Glamorized“; the “but of course” writeup about how “Wall Street Bros” loved the film; and an upheaval over the movie’s marital rape scene. Wow. Writing for Jezebel, Clara Bellum sums things up: “It bothers me that anyone could have sympathy for this guy after watching all of this.”

Ultimately, it’s showing sympathy for a loathsome character that has everyone stirred up here. And let’s give the writers some credit: if viewers are sympathizing with Jordan Belfort, it’s intentional. Any good storyteller knows that a reader’s identification with a protagonist is essential, and that it must be crafted. In his interview with  The Hollywood Reporter, actor DiCaprio described Scorcese’s—and screenwriter Terence Winter’s—sympathy goals for the film’s (admittedly wretched) characters:

I remember talking to Marty about [the detestability of these characters], and he goes, “Look, the thing that I’ve learned about doing movies is, if you make these people as authentic as possible, and you don’t sugarcoat that, people will forgive anything, and they will like those characters—not what they’re doing, but they will be invested in them.” It’s a very conscious choice that [Winter] made in the screenplay not to show the ramifications of their actions.

Making conscious choices for desired readerly investment? Writers are familiar with this. The problem, for those who are up in arms, is that “not showing the ramifications of their actions” effectively means leaving Belfort’s victims silent, invisible, and unaddressed.

We’re asked to identify with Belfort in part by ignoring the suffering of his victims—just as he did. This, to many viewers, feels grossly irresponsible. (Also just gross.)

On the other hand, Sadhbh Walshe maintains that Scorcese was just “doing what artists are supposed to do—be a witness to their time in history.” Walshe believes that the anger toward The Wolf of Wall Street is misplaced; that it should instead be directed toward politicians who, for instance, defund benefits for the country’s neediest citizens, and/or allow financial criminals to continue their misdeeds with relative impunity.

But Walshe fails to recognize that anti-WoWS writeups are actually using the movie to address these broader concerns. Even Christina McDowell’s emotional “open letter” touches upon many issues currently stemming from inordinate political leeway and a lack of accountability. She, like many others, used her anger with the film as a means of both recognizing and discussing overarching concerns.

And this is, I believe, precisely what gives the film its value. While artists may be “witnessing to our time in history,” we witness only to small, often isolated portions of it. The choice for any narrative is necessarily a choice against its alternatives. For better or worse, this means there’s always room for responses that amend, augment, or completely deconstruct our “testimonies.” As artists, we should expect this. And as consumers, we should ask ourselves: what will I do with art that portrays what I despise?

For many consumers of The Wolf of Wall Street, the answer was writing, blogging, and media-campaigning. And I can’t help but notice that, by grossly neglecting the stories of Belfort’s victims, The Wolf of Wall Street incited dozens of writers to tell those stories themselves. Does this make up for the movie’s many failures? I don’t think so. But it reminds us that art doesn’t exist in a vacuum. It interacts with its viewers, often creating a call and response. And this matters.

If viewers were simply docile, passive, and anxious to absorb into their moral framework any narrative that feels “infectiously fun,” this movie would have caused little stir. But viewers have responded, becoming part of the film’s felt impact. Unfortunately, even while they themselves are creating it, most critics have ignored the generative discourse that often follows good—as well as ethically precarious—art. While it can’t redeem or justify all shoddy work, might such discourse be a version of artistic success?

What the Backlash Means for Us:

As writers, we could choose to write only moralistic narratives, or to hold our readers’ hands into ethical resolutions. But by doing so, we would strip readers of the opportunity to exercise their own ability to respond imaginatively. And we may also strip the public of the productive (if contentious) discourse stimulated by questionable material.

Indeed, criticisms of The Wolf of Wall Street both devalue viewers—by assuming they can handle only moralistic tales—and esteem them, by providing immediate evidence of their astonishing critical thinking skills. The film’s critics affirm the necessity of moral-ethical conversations while simultaneously proving we’re capable of having them. This irony is ridiculous.

It’s also empowering. If perceived with some New Year energy, it can act as an invitation to leap wildly into our storytelling crafts: to make something, put it out there, and let the world either welcome it or furiously heave it back. Either way, can’t Good come from the interaction?