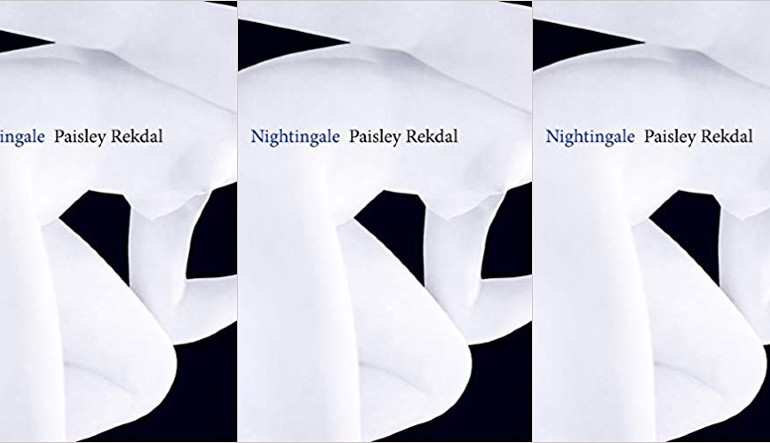 Is it a cliché to say that our experiences “transform” us? This way of thinking about our lives is inscribed in our everyday speech, in the ways we think of our individual stories. I live in an arc that transforms me from worse to better; I am always moving toward an improved future. But there are other arcs. Paisley Rekdal’s sixth poetry collection, Nightingale, explores the ways desire, pain, fear, and trauma transform us, often without our permission, and often into something unexpected. Using Ovid’s Metamorphoses to literalize the experience of painful emotional transformation, Nightingale’s argument becomes one about sexual assault—the role it plays in our poetry culture, but, even more importantly, the poisonous way it reconstructs the lives of its victims.

By the end of the first section of Nightingale, Rekdal is already signaling that it can be a terror to be transformed. In her poem, “Io,” she recounts the mythical story of Io through the narrative of a woman who has become a quadriplegic:

once being read a story about a girl

taken by a god who, to shield her

from his wife’s jealousy, changed her

double-weighted down with horns.

Even her gentle, chime-like lowing

only masked her human cries: a hunger

she could never satisfy with grass.

The horror… is not

that she has changed but that she can’t change

entirely. Memory makes some part of her stay

The injured woman is alienated from a previous version of herself, her “old desire locked / inside a new body, one of clumsy / twisted fingers, shriveled legs,” while the new version remains unacceptable to her. Rekdal sketches the trauma of transformation in the shape of the cognitive dissonance it creates in the transformed: I am me—who am I? The body, site of what is, is estranged from the mind, site of what used to be and what is.

These ideas are carried into the next section of the book, which opens with the poem, “Philomela.” In it, a woman visits her cousin’s art studio after her grandmother dies and wills the cousin money. When she gets there, she

stare[s] a long while at what she thought

was a tree blasted by lightning,

but the more she looked, the more clearly

were a man’s hands gripping a slender figure

by the waist, the thin body writhing,

frozen in his arms. It was

a girl, she saw, with shredded

The young woman remembers being raped, the way “her last date in college / had hissed, ‘You think / you’re so fucking pretty,’ spitting it / into her face so that she’d had to turn/her cheek to wipe it, which was when / he’d grabbed her arm, pinning her—”. The poem does not go on to describe the rest, as if this woman can’t stand to even think of it. In Ovid’s telling, after Tereus rapes Philomela, he cuts out her tongue to keep her from telling her sister, but she weaves a tapestry that tells the story. Here, the young woman receives her grandmother’s Singer sewing machine, her inheritance, in the mail. She thinks about “…sewing a quilt with it, / onto which she might embroider / shooting stars… the figure / of a child, perhaps, or of a man / by a house’s courtyard, his hat / in his hands, his broad body / naked, harmless.” Instead, she tucks the machine back into the box it came in, slides it onto a shelf, and hides it away.

The conversation between “Philomela” and the piece that follows it, a long, sectioned essay entitled “Nightingale: A Gloss,” makes up the heart of the book’s argument. “Nightingale” layers an explicit discussion of the Philomela myth, an autobiographical story of sexual assault, and the history of poetry’s pervasive nightingale imagery into a complex argument about sexual assault, silence, and the body. “I do not use my voice,” Rekdal says, describing being sexually assaulted. “The whole attack is conducted in silence.” That silence is a feature of Philomela’s myth, after her tongue is cut out—and when she is turned into a nightingale. In Ovid, this is ordinary:

Rape is the dark seam of The Metamorphoses. To Ovid, a poet, perhaps the ultimate dehumanizing act would bring the body to a place beyond language. People in his versions of the myths often become animals, men and women ‘more cut off from words than a seal,’ as Robert Lowell once wrote of one manic stint spent in McLean. To live cut off from words is to descend into the bodily, the irrational.

That alienation from the human, which traps us inside of ourselves by denying us speech, is a feature of sexual assault that isn’t just limited to Ovid. Of her own sexual assault, Rekdal says, “What happened to me feels like something that exists between words, a subcategory of expression for which there is no one easy expression.” In her inability to express what happened, she is transformed from verbal to nonverbal—from human to less-than. It is a transformation that Rekdal poses as uncorrectable. “When I try to explain,” she says,

what his teeth looked like, what his breath smelled like, the cold ridges of his nails as they clawed inside me, I know I am asking for something beyond the response of your own suffering, your awareness of my suffering. I don’t care what you know or how you feel. I want to go back in time, to an eternal before. I want you to give me what no one can give me.

Like many survivors, she wishes by telling she could be changed back, but her experience is, at its core, silent, unsayable.

The collection doesn’t end on this sentiment, though. It ends with the poem “Pythagorean,” which, in some ways, is a release from thinking of the mind as trapped in a transformed body. It is a discussion of, among other things, empathy and its failures, jumping as it does between the interiority of four dinner party guests, each of them cordoned off from each other, as we all are, by the only-ness of their minds. In the act of moving between these perspectives, though, we feel the opposite of the woman in “Io,” who is so tied to her body that she feels desperately trapped in it, the opposite of the survivors in Nightingale. Though the characters in this poem seem to misunderstand each other, the reader is released into their thoughts and able to experience the ways they love and are frustrated by each other, the ways they are authentically connected. In a small way, this affords us a freedom from our own bodies. At the end of a book that is so concerned with the ways trauma isolates us in our minds, this is incredibly moving. Like the artist in “Philomela,” Rekdal has allowed us to connect with another intellect, to inhabit it tactilely, even as we are inescapably where we are, inevitably ourselves, inside bodies that carry our traumas with them. Like the artist in “Philomela,” we may find relief—in others, in art, in speaking or hearing an authentic voice, one like this one.