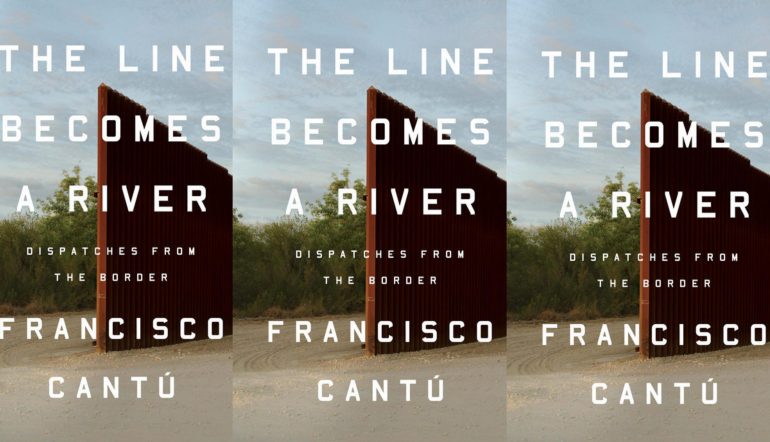 In the desert, by the border, Francisco Cantú dreams of wolves. They are strange, menacing figures whose appearances portend a message he can’t quite figure out. Are they stalking him, the way he and the rest of the Border Patrol trail Mexican migrants through the Sonoran desert? Are they a subconscious reenactment of his waking life as an agent, or are they threatening revenge for it? In the dream, Cantú writes: “The wolf leans into me and brings its face close to mine, as if telling me a secret.” He wakes before it can be shared.

It’s that same elusiveness that brings Cantú to the border in the first place—raised in West Texas by his Mexican American mother, the border is in Cantú’s blood. But it’s not enough. “I want to see the realities of the border day in and day out,” he tells his mother. “I’ll never understand it unless I’m close to it.” She is incredulous: “There are a hundred other ways of knowing a place.” They’re both right, and The Line Becomes a River, his memoir of his years in, and just out of, the US Border Patrol, is a book where all the competing, troubled realities of the border collide. His dreams are a site of reckoning, where everything he can’t, or refuses to see in his waking life, is made manifest.

Cantú keeps his dreams to himself, but they are present wherever he goes. The animals of the Sonoran recall the wolf, whose silence is always on the verge of breaking just before he wakes up. The animals were there before America was mapped out, and their unhindered movement through the desert is a reminder of the unnaturalness of borders. On a night hunt after smugglers, an agent radios about a mountain lion on the trail ahead of them. It’s too dark to spot the animal but they hear it hissing—“a sound like hot wind escaping the depths of earth”—and they draw their sidearms. Cantú is filled with fear, “not of the danger posed to us by the animal, but rather by the idea that it would show itself to us, so many men armed and heedless.” The Border Patrol are predators on the hunt for the men, women, and children that the state has rendered prey.

Even when he’s transferred to an office job in El Paso working in intelligence, the animals continue to haunt him. A prairie falcon comes into view of one of the camera feeds he’s monitoring and Cantú is unnerved by its “interrogating gaze,” to which he admits his cowardice in leaving the desert: “I’m afraid to come any closer, I wanted to whisper. I’m afraid the violence will no longer shake me.”

Cantú retreats, eventually leaving the force to go to grad school, but the violence and the border stay with him. He has other dreams that are absent of the wolf, ones where his teeth crumble apart in his mouth, one where he and two other agents are walking the streets of Ciudad Juárez avoiding the cartel, another where he is shoots a boy in the desert, wounding him enough that he begs Cantú to kill him. These dreams are disturbing in how closely they run alongside his waking life, blurring the thin line between nightmare and reality. In one chapter Cantú shares the testimony of a sicario terrorized by his own dreams. “There was a line that I had respected between the work I did,” the sicario says. “But this work no longer stayed on one side of the line.” There’s a violent slippage, of people through borders, of dreamers and the awake.

But what good are dreams, and talking about dreams, when the border is such a waking nightmare? After leaving the Patrol, Cantú works as a barista in Tucson. His coworker, José, travels back to Mexico to visit his dying mother, but is stopped at the border before he can return to the US. He is detained, and eventually deported. Cantú brings José’s family to his immigration trial, and before he is taken back into detention he takes a last look at his sons and wife, “his eyes wide with longing, and then, with great force, he began to thrash his head downward, to and fro, as if trying to shake a nightmare upon waking.” Cantú gets to make peace with the wolf who stalks his dreams, but José’s nightmares are exactly the kind you don’t wake up from.

Later, Cantú dreams that he is at work, his boss is sitting with him drinking coffee when she points at the door: “It’s José.” It’s like life, but not quite. José is weary, walking slowly, thin. He walks to Cantú: “His eyes are sunken in their sockets, his face is dark and old. I’ve been in the desert, he says. There are things I could tell you.” He shares the dream with his mother, who suggests that the visit from Jose is a sign that Cantu should reciprocate. “Many cultures believe that our souls travel at night… So maybe Jose came to visit you,” she says. “Maybe you need to go to him and listen.” And he does listen. The next, and penultimate chapter of the book, is a letter from José, his own crossing in his own words. It is a last gasp at redemption, an opportunity to listen to a message without the threat of interruption, but it’s not enough. Dreams are flimsy in light of the violence and terror of waking life for José, and all those that are victim to the border. José’s dreams are free of omens, but he wakes to nightmares: “I have to cross, I have to arrive to the other side. I even dream that I am there. I dream that I’m there with my family, that it’s morning and I have to go to work. Then I wake up and I’m here.”