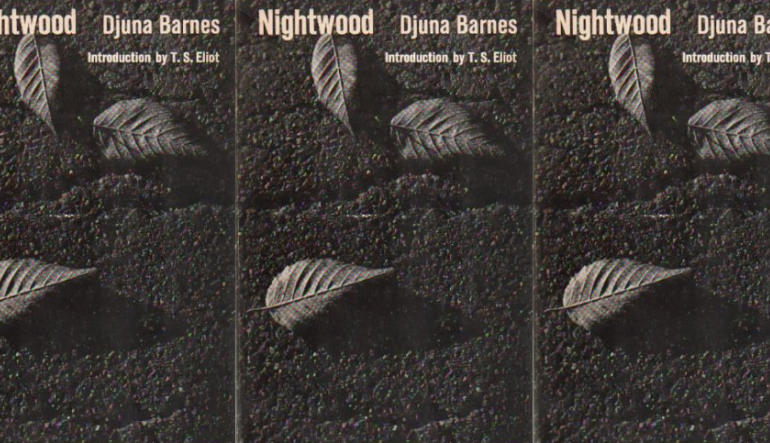 Guest post by Megan Mayhew Bergman
Or, perhaps I should say, Nightwood–finally visited.

As readers may recall, I publically chided myself for my inability to get through a book I truly wanted to read–Djuna Barnes’ novel, Nightwood. Fond of her other work (Ryder, Creatures of an Alphabet, Ladies Almanack, How it Feels to Be Forcibly Fed) and convinced of her importance, I’d made previous attempts to read the book, and failed miserably, finding the prose of the first few pages thick and slow-going.

I still found those first pages slow going, but, as T.S. Eliot promised I would in his introduction to the work, discovered upon completing the novel “a great achievement of a style, the beauty of phrasing, the brilliance of wit and characterization, and a quality of horror and doom very nearly related to that of Elizabethan tragedy.”

Ultimately, it felt good to work through Nightwood. I fought a little. I paused and re-read. I even scribbled the word “momentum” on the top of a page to celebrate the instant when I found myself investing in the work. It happened, as a fellow Ploughshares reader suggested, at Dr. O’Connor’s entrance.

Here’s a quick summary of Nightwood for those unfamiliar with the book: Robin Vote marries a false Baron and unenthusiastically bears him a male heir. Unhappy, she abandons her family and moves in with Nora, an American in Paris, but eventually leaves her as well–departing their home at night, drinking, and taking up with a widow, Jenny. In anguish, Nora consults Dr. O’Connor repeatedly on Robin’s behavior, and her own feelings of distress, ownership, and abandonment.

The verdict: I admire Nightwood, but not unequivocally. The characters were stupendously original (especially the transvestite Dr. O’Connor), the setting dark and fascinating, and Barnes’ use of language remarkable. But at the end of the work, I was troubled by my lack of belief in Nora’s obsession with Robin, and this was a barrier to my complete enjoyment of the book.

I never bought into Robin’s allure–what made her worth Nora’s constant agony, and endeared her so easily to her hapless and deceitful husband Felix and the widower Jenny.

Robin’s character is often assumed to be based on Barnes’ lover, Thelma Wood, but I didn’t find much realism injected into Nora and Robin’s connection. There was nothing ardent or compelling about it on the page–in fact, the reader rarely sees the relationship. Nora is driven nearly insane by Robin’s promiscuous and impulsive behavior, but I couldn’t empathize. I couldn’t feel Nora’s pain, love, or frustration, because largely I was only told it was occurring; I wasn’t given the material I needed to believe it. I couldn’t feel what she was losing.

Feminist critic Shari Benstock writes that, “Indeed, there is no enactment of the love between the two women–only a statement of its existence as a powerful force.” Maybe Barnes didn’t want the meaning of her work upstaged by what an audience of the thirties would have perceived as vulgarity or “inversion.” As critics and another Ploughshares commenter pointed out, Barnes’ mentor, T.S. Eliot, edited Nightwood to tone down potentially scandalous elements–the unedited version, which I haven’t read, may illuminate the relationship further. Maybe Djuna didn’t want to invest herself in “showing” rather than telling, as her ambitions lay elsewhere. Given the assumed real life inspiration behind the character, perhaps Robin’s allure was always inherently compelling to the author–or Barnes was too private to reveal the intimate details that would have made it so.

Unfortunately, I lost patience with Nora’s obsession with Robin and her analysis of human behavior traded back and forth with “Dr. Matthew Mighty O’Connor.” Robin is a drunk! I thought. She’s cheating on you! She has a son from a marriage that she completely abandoned. So she has an avant garde perspective on gender roles and controlling her own sexuality–is that worth the abuse?

Please, Nora, I thought while reading. Convince me that your preoccupation is warranted.

Please, Robin, I said to myself. Help me like you. Help me find a redeeming aspect to your behavior.

Neither character affirmed my needs, nor did they necessarily have to–but there were tradeoffs. When I realized I wasn’t entirely buying Nora’s love, her ongoing dialogue with the doctor began to smack of melodrama–the profession of big ideas for their own sake, not the narrative’s. That said, between Nora and Robin’s troubled lives and their illogical behavior, an important sense of fractured female selfhood began to emerge that might not have been possible if the characters’ choices were predictable and familiar.

I understand that Nightwood is not a traditionally constructed, plot-driven narrative. I also understand that sexual politics and societal commentary are at work. The subtext and symbolism are rich in Nightwood, and, as Benstock says, are rendered in a way that “shows woman divided against her physical being.”
Djuna’s probable intentions acknowledged, I always find myself hoping that a novel will feel more organic than the author’s agenda. I’m all for authors revealing the lives of marginalized people and illuminating human truths, but I like my symbolism subtle. This is a personal reading preference, however, and not an indictment of the work.

For me, the real achievement–and where I found most of my enjoyment–is in Barnes’ phenomenal and inimitable use of language. While reading Nightwood, I thought often of Slate critic Meghan O’Rourke’s line in her case for difficult books: “Reviewers sometimes don’t tell readers what to expect or explain that a book’s primary pleasure is linguistic rather than narrative…” What I loved about Nightwood–what really had me inking up the margins–was Barnes’ powerful ideas and unusual word combinations. Just a few of the examples I marked:

Youth is cause, effect is age; so with the thickening of the neck we get data.


Every man has a housebroken heart except the great man.


…there could be seen coming, early in her life, the design that was to be the weather-beaten grain of her face, that wood in the work; the tree coming forward in her, an undocumented record of time.


There is a certain belligerence in a room in which a woman has never set foot; every object seems to be battling its own compression–and there is a metallic odor, as of beaten iron in a smithy.


Yes, we who are full to the gorge with misery should look well around, doubting everything seen, done, spoken, precisely because we have a word for it, and not its alchemy.


Our bones ache only while the flesh is on them.

It has been pointed out that, in the case of Djuna Barnes and Gertrude Stein, to focus on style over substance undercuts their achievements as writers, or indicates a reader’s obtuse interpretation or social bias. This may be true, but as a reader, I just happened to find more pleasure in Barnes’ lyrical stylings than Nightwood‘s substantive intentions. Lyrically speaking, I think she’s a genius, and that, for me, overshadowed the rest of the work.

To conclude, I think more people should read Djuna Barnes. Her work deserves the attention and the conversation–it’s complicated, polemical, smart, elegant, and political. Her language itself is an artistic achievement, particularly in Nightwood. Any fan of Joyce or of the Left Bank literary scene at the turn of the century owes her a read.

Dense books such as Nightwood are entitled to a second if not third reading, and I look forward to the way my perspective might change upon such readings. I’m also open to conversation and suggestions from others who have read the book, mainly: How did you feel about Robin? What made you buy Nora’s obsession? Is Robin a heroine or victim?

An editor of a journal once asked me to keep the following question in mind when evaluating submissions: Your own taste aside, does the work succeed in its own right, with what it wants to achieve?

In Nightwood‘s case, I think the answer is yes. If the bulk of the criticism I’ve read is on point, the book succeeds in presenting a fractured female self, putting the reader at odds with the text through complexity, and achieving a unique literary style. Nightwood is peppered with social and artistic triumphs.

Djuna, I believe, realized her intentions–and I don’t think those intentions included satisfying a bourgeoisie thirty-year-old Vermont mom with a believably rendered relationship between characters. What the reader wants is not always what the reader gets–and, admittedly, a work’s success may lie independent of a consumer’s easy wishes.

This is Megan’s thirteenth post for Get Behind the Plough.