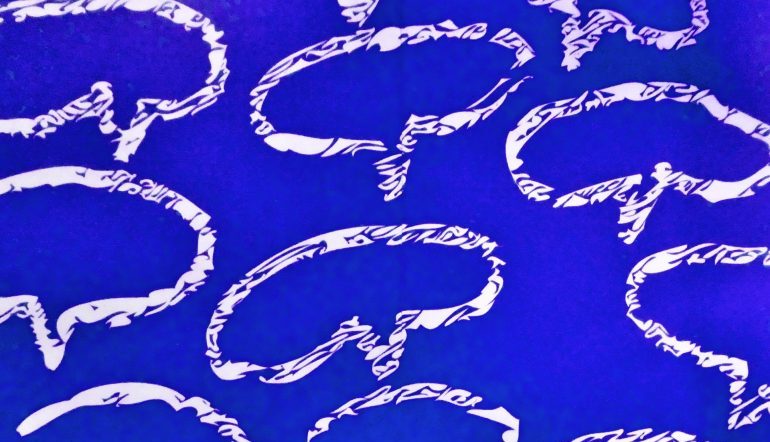 I wrecked my neck last July–three blown discs, bone spurs, stenosis, a semi-choked spinal cord. For the next eight months, I was unable to write. On a good day, I could type for about ten minutes or write briefly by hand. Then mid-winter, I compounded the injury and was unable to write at all, or hold a book, or walk without clutching a wall. Prior to July, I’d had a daily yoga practice for more than eight years and had written daily for more than twenty-five years. “One has the choice of coming before the world as a writer or actually being one,” wrote Saul Bellow. For me, being one meant working at it every blessed day. Which I loved doing and did to excess. This contributed to my neck’s collapse.

Friends and family quickly suggested speech recognition technology. This was met with mulish resistance. I still have no idea why. Much of it is attachment, I’m sure, attachment to the ritualistic aspects of writing. Once, I hoisted the thick white diner coffee mug my friend John Rodgers gave me decades ago for a Christmas present–before he died of AIDS, when he was still the world’s best thrift store Santa–the mug that never left my desk except for trips to the coffee machine: “If this ever breaks,” I announced, “just put me down.” I was certain I wouldn’t be able to write without it. But early in my injury, I stood up from the couch with the Times in one hand and the mug slipped from the other. The spinal compression had weakened my grip. I had yet to realize this. The mug shattered into fat ceramic shards on the hard tile. I looked at it, unable to cry. “Well, that makes weird sense,” I told the startled dog.

It makes sense, too, that if any writer could use speech recognition fluidly, it would be Richard Powers. In a compelling essay, which he wrote from bed by speaking to a tablet in his lap, Powers says he hasn’t “touched a keyboard in years” and admits it took him “weeks to get over the oddness of auditioning myself in an empty room.” He keeps august company: Homer, of course; Milton recited Paradise Lost while blind; Stendhal, Dostoevsky and Henry James spoke their novels into being as others typed. Wordsworth and Wallace Stevens composed while walking, where, as Nietzsche claimed, “all truly great thoughts” were conceived. In Hindu and early Buddhist philosophy, sacred works were exclusively oral. Tradition dictates that text be corrected against the spoken. The written word is considered a crutch for the weak-minded, for those who can’t memorize. This is how the Vedas were transmitted for centuries.

From Socrates to Derrida, we can map a parallel duel between speech and text in the West. I don’t believe one is inherently better. I just can’t seem to manage what Powers calls the “huge cognitive readjustment” required. And, in my experience, speaking is a direly different thing than writing.

Whenever people say, “You write just like you talk,” I flinch. Part of the reason I write is because I’m a lousy speaker. Ask any of my seven siblings, all of whom are dazzling on their feet and at home with a microphone. One brother dubbed me Ed early on. Ed McMahon. I still laugh hysterically at everything they say. That’s my contribution to the carnival. In a family of ten hyperkinetically linguistic people, airtime is minimal. You have to earn it to keep it. I get the hook about four seconds after opening my mouth, for good reason.

Speaking implies an intended audience, a thought I find paralyzing. Writing every single day helps eliminate the self-consciousness that can be deadly. It also helps develop our version of the athlete’s or musician’s muscle memory. The more dissolved we are in the act of writing, the better the result, I believe. Of course, this is part of the argument for speech recognition; it’s frustrating to write with stumbling fingers, to be limited by physical ability. I’ve been confronting this for the first time, after years of being able to write at thought-speed.

A recent Esquire profile of Roger Ebert describes how the man who made a living with his voice lost it overnight. He now speaks through computers and palm-sized notes. And he writes deliciously. In fact, he just won a Webby award. Not a filmgoer, I didn’t follow Ebert until he began blogging. In an early entry, he observes an internal shift:

In May, I began to sense a change going on. At first it was subjective. This autumn it has become undeniable. My writing has improved.

By that I don’t mean it’s objectively better from the reader’s point of view. I mean it has expanded within my mind, reaches deeper, emerges more clearly, is more satisfactory. Sometimes I glory in it–not the quality of the prose, but the quality of the experience. I find myself writing more, because I will return to that zone longer… The Muse visits during the process of creation, not before.

The quality of the experience–exactly. For me, writing helps to access a state of mind, a quality of consciousness. This could be, like the mug, mere habit. Or it could be that speech is a very different cognitive act. Powers notes that “speech and writing share some major neural circuitry, much of it auditory.” This makes sense. In writing, I never use a word I can’t hear. “All readers,” says Powers, “subvocalize.” But speech seems more linear to me. I can write a fugue state, but I can’t speak one.

Just as the music in a jazzician’s head is fused with the voice of his instrument and its physicality, I compose differently when writing. I think differently. Writing at its best is thought transcribed, which is what makes it such an intimate and irreplaceable thing. To be alone and reading is the essence of mind meeting mind. It’s easy for bodies to meet. Only another mind can meet ours in the sphere of solitude.

“I write not as I speak, I speak not as I think, I think not as I ought to think, and so it goes on into the deepest darkness,” groaned Kafka. When his beleaguered fiancé, Felice Bauer, said she’d like to sit beside him one night as he wrote, he replied:

In that case, I could not write at all. For writing means revealing oneself to excess; that utmost of self-revelation and surrender, in which a human being, when involved with others, would feel he was losing himself, and from which, therefore, he will always shrink… This is why one can never be alone enough when one writes, why there can never be enough silence around one when one writes, why even night is not night enough.

This past year has been a master class in non-attachment. Lately my writing, like my yoga, is remedial. It’s clumsy, hesitant, often painful. And I feel wild with gratitude, with homecoming.

Photo courtesy of The Seattle Times.

This is Carol’s fourth post for Get Behind the Plough.