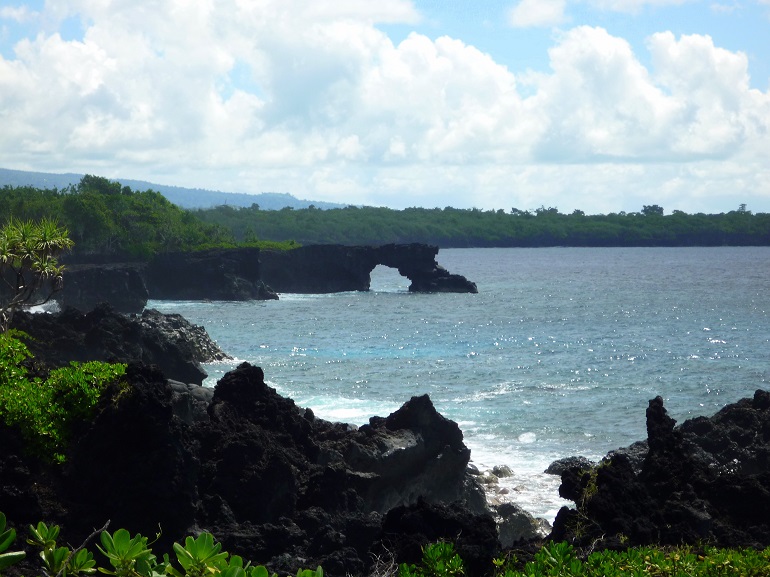 It started on a Sunday morning when Doug Mack and his wife were sifting through laundry day quarters, and soon it lured him thirty-one thousand miles across the Pacific and Atlantic in search of the America no one talks about: colonies. You know, those places we gloss over in the scroll-down menu when filling out address forms on websites. Places like American Samoa, Guam, and the Northern Mariana Islands.

Mack is a travel writer. His first book, Europe on Five Wrong Turns a Day, paid homage to the old travel series title, Europe on 5 Dollars a Day. He’s also written for National Geographic Traveler and Travel + Leisure. So we might expect him to whisk us away from what we already (think we) know and take us to fantastic far-away lands, but he’s not your average travel writer. In The Not-Quite States of America: Dispatches from the Territories and Other Far-Flung Outposts of the USA, Mack goes to the five American colonies, shedding stark light on the politics and history of the mainland. It makes for a read you can’t put down and can’t quit rolling around in your mind afterward.

Take colonialism, for instance. Something we’re implicitly taught in grade school and through college is what a nasty word it is, a distasteful practice done by less enlightened empires, not by the USA, the shining example of democracy. Movies, literature, even news events such as Russia’s recent encroachment on Ukraine perpetuate America’s supposed superiority by encouraging citizens to take a stance against such actions. But what would we say if more news shed light on the four million people who inhabit the little islands the US has usurped (usually for military purposes)? What would we say if our state and college-board-approved history books revealed the less-than-glittering reality of our bravado or arrogance?

“For Americans, it’s easy to think of colonialism in these history-book terms, misdeeds carried out by other people in exotic places,” Mack writes, raising the question later, “What does a colony even look like in the 21st century?”

It would be so easy and self-serving for an author to go off on a political tangent, à la Dennis Miller, at this point. However, Mack avoids taking a political stance in Not-Quite. In fact, he evokes lots of essayistic questions such as: “But where do we draw the line between colony and not-a-colony? If the Danish West Indies were a colony on March 16, 1917, what about the U.S. Virgin Islands on March 17, 1917? Did we make that politically charged label disappear simply by hanging up the UNDER NEW MANAGEMENT sign?”

All the while, he arouses our curiosity through five well-curated chapters as he writes of millionaires in castles, hippie dropouts, and pirates that decorate the history of these places: “The Empire’s New Clothes” (about the Virgin Islands); “Foreign in a Domestic Sense” (American Samoa); “Offshoring the American Experience” (Guam); “Land of Opportunity” (Northern Mariana Islands); and “Be True to Your Home” (Puerto Rico). While it’s easy to see Mack did a copious amount of research for this work, he never bogs down the book into a laborious read. It’s often riveting, in fact. Imagine, for instance, that:

Mack uncovers such obscure yet evocative facts that it’s hard to see his book as simply a travel book. The overall effect sheds the kind of light on our country that we typically only glean from getting away from it—far away from it—for a large chunk of time. Think expatriates, for example.

Think again though before you erroneously believe that Mack is professorially serious. His sense of humor ranges from sardonic to kitschy. In one example, he talks about psyching himself up against mental images of being flattened like a pancake as he drives a rental car on the left rather than right lane. Another anecdote made me want to book my flight straight away: “There’s a bar down at Coral Bay (in the USVI) where you get all these fugitives from the States. Go in there and just whisper, ‘FBI,’ and just like that it’ll clear out,” he writes.

Mack sometimes quotes the popular travel writer Bill Bryson, and he definitely shows Bryson’s influence, for instance, through self-deprecation. He once refers to himself as “effete.” But this isn’t travel writing of the 1990s. This isn’t about which hotel to stay at and which beach has the best snorkeling. Furthermore, Mack doesn’t project his presuppositions upon the people he meets in his travels. Instead, he asks questions like an essayist, which allows the reader not to form an opinion, but to ponder along with him.

From funny tales to contemplations on the disparity of Medicare and Medicaid payouts, work visa status, and other repressive actions the mainland US government takes to prevent residents of these islands from becoming bona fide citizens, readers will find this book relevant to many current events, such as our controversial new president.