Home
»
Interviews
»
Nuance Within the Shadows: An Interview with Esmé Weijun Wang 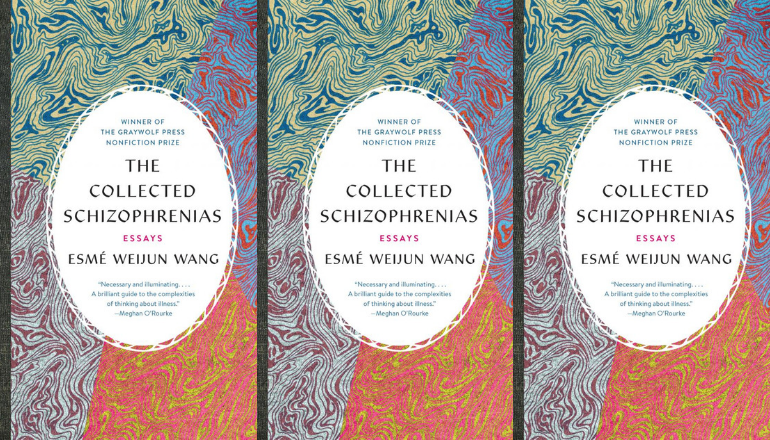 In 2016, Graywolf announced that Esmé Weijun Wang won the Graywolf Press Nonfiction Prize for her book The Collected Schizophrenias, and I have anticipated the collection ever since, especially because of the dearth of literature about this mental illness. Wang, who was diagnosed with schizoaffective disorder in college, after earlier misdiagnoses, debunks stigmas and stereotypes about schizophrenia in this collection of essays, and provides essential information about a spectrum disorder long misunderstood.

The Collected Schizophrenias begins: “Schizophrenia terrifies. It is the archetypal disorder of lunacy.” Wang (who published her debut novel, The Border of Paradise, in 2016, was named one of the “Best Young American Novelists” by Granta in 2017, and won a Whiting Award in Nonfiction in 2018) leaves no room for ambivalence about the illness’s severity. She examines why it frightens us so much, familiarizing readers with the language of mental illness and citing research findings and statistics about the state of mental health in America.

In addition to this meticulous research, Wang’s personal experience with schizoaffective disorder is foundational to these essays, and she is candid about the very real suffering she has experienced. She chronicles throughout the collection what it is like to be involuntarily committed to a psychiatric hospital, the challenges of managing her illness, what it means to pass as “normal,” and the biases she notices the general population has about what “crazy” looks like. Even with so stigmatizing an illness, Wang’s kempt appearance, wedding ring, and high-functioning behavior prompt others to dismiss her mental illness, which, she notes, negates a part of herself and the challenges she handles on a daily basis. Wang also explores this tension between illness and self—where the self ends and illness begins and whether there is a self that is not one’s illness. Wang’s life is further complicated by Lyme disease, another stigmatized illness she also suffers from and writes about in this collection.

Additionally, Wang considers what it means to record her illness and make a narrative out of it—she is particularly interested in how trauma narratives are advised not to have contradictions even though contradictions are often very much a part of one’s existence. In this interview, we discussed the writing process, focusing in particular on writing about trauma and mental illness.

Sarah Appleton Pine: Many of the experiences that you describe in The Collected Schizophrenias the average person does not experience. What has it been like to shape these experiences and grapple with your diagnosis in writing?

Esmé Weijun Wang: I enjoyed grappling with the diagnosis in writing. That’s one of my favorite things about writing—that I can take something amorphous and confusing, and try to shape it into something that looks more familiar and understandable.

SAP: So much of what you write about is traumatic and challenging. Can you describe your writing process and what it took to produce and shape this sensitive material?

EWW: I touched base with a lot of my friends who’ve written memoirs when I was working on this book, even though The Collected Schizophrenias isn’t a memoir, because I wanted to know how they dealt with the trauma of reliving some of their most painful memories; in writing this book, I did spend time going through thousands of pages of old journals and medical records, which was a brutal experience, and I often needed to stop and try to calm down.

SAP: When I found out that you’d won the Graywolf Press Nonfiction Prize, I was tantalized, and I felt like I had to wait forever for your book. I imagine that you had to make difficult choices in writing and structuring your collection. Can you tell me about your editing process?

EWW: When I won the prize, I had 100 words of essays, and Steve and I went through to figure out where the gaps were in the narrative arc. We talked about what the narrative arc might be, and then he sent me away to write more essays. We met up again to talk about what else I might need, and then I revised and edited more, and so forth.

SAP: When I read your book, I immediately viewed it as a text that would fit into the canon of mental illness literature. How do you see your collection in the context of other literature on mental illness?

EWW: That’s incredibly generous of you. I’d be honored if this book could fit into the canon of mental illness literature—there’s so much of it that I love.

At some point I told Steve Woodward, my editor, that my ideal was to write a book that did for schizophrenia what The Noonday Demon did for major depression—in other words, I craved a book that combined the author’s own experiences with mental illness, well-rendered and capable of depicting the horror of the thing, with a depiction of the larger story that included research and reportage. From the beginning, I was less interested in writing a memoir than I was in writing something that could touch upon the large span of schizophrenia’s history, its relationship to arts and culture, its context within science and medicine, the laws that surround it, and so forth.

So I didn’t want to write a memoir. And, at the same time, I didn’t want to write a comprehensive tome. Around the time of the release of my debut novel, I began to write essays. Most of them were about mental illness. As I wrote more essays about schizophrenia (what I call “the schizophrenias,” acknowledging the wide scope of schizophrenia and its related disorders), I realized that I was slowly creating a kaleidoscopic view of what I experienced schizoaffective disorder to be: fractured and complex, with each facet only becoming clearer as I turned my focus upon it.

Writing this book allowed me to peer into the corners of the places where the schizophrenias lie. I want the people who fall within its borders to feel less alone, and I hope people who don’t will read this book and understand it a little bit better. Schizophrenia is widely known as a terrible, terrifying thing. My wish for this book is that those who read it will find more nuance than that within its shadows.