Poetic language often calls attention to itself through its sonic and performative qualities. These qualities can take the form of sound devices such as alliteration, assonance, consonance, repetition, rhyme, and rhythm. To call attention to the dimension of sound in particular—what the linguist and literary theorist Roman Jakobson refers to as “promoting the palpability of signs” in his famous essay “Closing Statement: Linguistics and Poetics” (1958)—is to become aware that there is always a hierarchy of functions at work in any given semiotic system. Jakobson writes, “The poetic function is not the sole function of verbal art but only its dominant, determining function, whereas in all other verbal activities it acts as a subsidiary, accessory constituent.” Thus, when poetry is intended to be read aloud and music is intended to be performed, these performances operate by effectively disappearing their written, visually composed elements, and subordinating those constituent parts.

Music and poetry both make use of many of the same sound devices, and so it is common in popular culture to have a significant overlap between musicians and poets. Bob Dylan won the 2016 Nobel Prize in Literature “for having created new poetic expressions within the great American song tradition,” according to the Nobel Committee. Music and poetry are therefore often lumped indiscriminately together into the same genre. (Even by doing so, a hierarchy is often implicitly maintained that places poetry above music as a kind of transcendental, upper limit of music.) What is interesting, however, is that poetic language and music generate their own distinct excesses of meaning, which function in significantly different ways from one another. Structural linguistics holds that language, for example, and does a kind of pointing outside of itself and into the world for its meaning, whereas tonality in music (and here I am talking about music purely in terms of sound rather than any lyrical element) cannot point directly to an outside referent in this way, and instead communicates meaning through an intensification of feeling.

The poet, avant-garde musician, and dramatist Russell Atkins plays with both this parallel and incongruency between poetry and music by reframing their primary functions, focusing not on their sonic qualities but instead on their visual construction, the quality that is effaced during performance. In his collection, Objects for Piano (1969), Atkins confronts readers with what he calls “composition-and-sound”—in essence, four movements of handwritten sheet music: 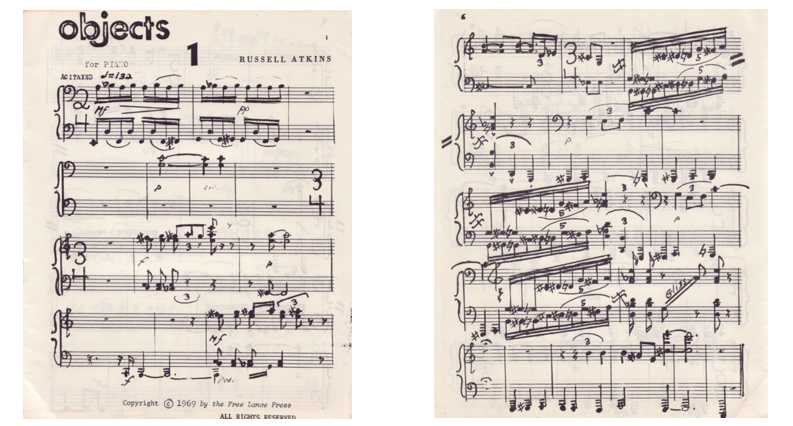 “Composition” here can be understood in the contexts of language composition, music composition, and visual composition—a kind of arranging or ordering of constitutive parts. For Atkins, however, composition is opposed to music. In a theoretical essay titled “A Psychovisual Perspective for ‘Musical’ Composition” (1955), Atkins writes that the “error” in music is assuming that it is written for the ear. Atkins contends that rather than the ear, music is written for a mental-conceptual apparatus that is always oriented by space and relation. He writes: “To a psychovisualist, the only intentionally organized sound on the part of a composer is Composition, which is not a binaural art but a VISUAL ART. In short, so-called ‘musical composition’ is a VISUAL ART.” For Atkins, this visually-oriented mental ordering of sound—a kind of “‘SEEING IN THE MIND’ or ‘MIND’S EYE’”—creates meaning for music and poetry, and that meaning does not exist independently from their visual composition but is a product of it.

Atkins points out that our musical vocabulary is inundated with visual images: chord color, form, architecture, etc. In addition, Atkins writes, “So conditioned is the psyche by the eye’s command of a ‘real’ or material world of objects, so conditioned is it also by the neural response of our physical conditioning, that form comprehension psychically demands that we apply the same or the greater portion of such conditions to our thinking or it is meaningless. Therefore, notes are ‘high’ or ‘low’, soprano above bass, not because soprano is above base, but because they have been given such spatial positions to which any deviation can refer for related meaning.” Tonal sound, since it does not have any real-world thing “behind” it, only becomes meaningful once a listener grasps its spatial-relational ordering. It is the same reason a progression of chords sets a listener up to expect what will come next in the progression. This is what gives the sound its compositional object-form. As Atkins puts it: “A composition and terms of sound has the disadvantage of having no semantics particularly applicable to specific things and must, so to speak, CREATE AND ESTABLISH (IN TERMS OF ‘MOTION’-DEPTH-HEIGHT) AS CONCRETE AN OBJECT-FORM FOR ATTENTION AS POSSIBLE, keeping considerably in mind the dissipation of object identity in the delicate apparatus of (inertially) contradictory images.” Words benefit from the fact that they already have a concrete object or objects in the world to which they refer. Sound, on the other hand, if it is to be understood and held in our minds at all, must also establish an object as concretely as possible. Objects as visual compositions are primary to our understanding. Sound is auxiliary.

In an essay called “Objects: For Russell Atkins,” included in the book Russell Atkins: On the Life & Work of an American Master (2013), the poet and literary critic Aldon Lynn Nielsen writes that Atkins’ compositions are “scored like a ton of bricks,” and that Objects for Piano “is most certainly a piece to be played, though it has seldom been played, but it is just as much an object to be looked at.” Nielsen also points out that “Session musicians often speak of their dread of ‘the black page,’ the page of a composition suddenly thrust before them that presents difficulties they are expected to surmount; ‘The black page’ because of the sheer number of notes on the score.” A black page of composition does not allow a reader to subordinate the piece’s visual function; it is a wall, not a window. Professional musicians are able to “sight read” a new piece of music as a demonstration of their proficiency and fluency with the language of written music. Atkins challenges this fluency, both for readers of poetry (the poem is written in a foreign, informational language of musical notation) as well as readers of music (he inserts every accidental symbol, abruptly changes time signatures and indicated clefs in multiple places, and clutters the page with eighth and sixteenth notes), creating a black page of textual and informational excess. Atkins also gives his compositions specific articulations and dynamic markings, notation that has no exact analogy in written English. In “A Psychovisual Perspective for ‘Musical’ Composition,” he writes, “Composition-and-sound literally is no language and cannot achieve what language can achieve in the way of communication by methods of discursion.” This may be why Atkins refers to these compositions as “objects” for piano, rather than music or poetry for piano. He seems interested in finding a non-language that operates purely through an aesthetic function rather than a communicative one.

Later in “A Psychovisual Perspective for ‘Musical’ Composition,” Atkins recognizes that the object of music needs to be present because “a sound heard and no object present invites the question, ‘What made that noise?’ It is that ‘What’ that Composition must achieve through sound applied: a distinct enough presentation of ‘objects’ or ‘things’ in motion and relationship.” It is as though Objects for Piano is a metaphysical investigation into the concrete objectness of music. Atkins’ investigation attempts to open up the parameters for how a literary work “means,” but writers who work in this mode risk becoming outsiders by positioning themselves in a rarefied theoretical space. Atkins himself has spent the majority of his life in Cleveland, OH, where he took courses at the Cleveland Institute of Music and published in and co-edited Free Lance, a Magazine of Poetry and Prose, which was described by Black World magazine as “the only Black literary magazine of national importance in existence.” Despite this, much of Atkins’ work languished in critical obscurity until recently.

The attention paid to Atkins’ work by modern scholars highlights one more dimension to the “black” page beyond mere textual composition. The poet, scholar, and cultural theorist Fred Moten could have had Russell Atkins in mind when he wrote in In the Break: The Aesthetics of the Black Radical Tradition (2003) that “The history of blackness is a testament to the fact that objects can and do resist.” Atkins would seem to agree; his primary interest in Objects for Piano is a reification of art objects that resist any kind of rhetorical communication with an audience. In an essay titled, “To Be Set To Music: The Rhetorical-Aural Poetry Dramas of Russell Atkins,” also included in Russell Atkins: On the Life & Work of an American Master, the poet and scholar Tyrone Williams writes, “In the context of African American life in Cleveland in the first half of the 20th century such a stance [that an artist is not obliged to communicate with an audience], however misunderstood, was a call to artists to reject African American ‘culture’ to the extent that it was largely, if not only, a by-product of slavery and racism.” Thus, in his deconstruction of received cultural forms, Atkins understands himself to be expanding the boundaries for what “counts” as Black culture. As Williams puts it: “Given the significance of African American innovations in music, however stereotyped, vis-à-vis American culture, we may thus understand ‘to be set to music’ as both a reimagining of the future possibilities of all American music and, more particularly, a re-envisioning of what counts—and doesn’t count—as African American music and, more generally, African American culture.”

Atkins has made it clear that his art does not intend to persuade or convince. And unlike many of his contemporaries, such as Langston Hughes and LeRoi Jones, little of his work’s content addresses his subjectivity as a Black poet. The introduction to Russell Atkins: On the Life & Work of an American Master includes an earlier review of Atkins’ poetry from Negro World magazine in 1969: “if Brother Atkins’ picture were not on the cover, one would have a difficult time knowing he is a black poet.” Atkins seems to believe that his poetry has a right to exist on its own aesthetic terms, and as objects without rhetorical justification. He sees it as a freedom for both the artist and the audience from the performance of overly determined abstractions such as “culture.” Objects can and do resist. Unfortunately, it is only in delayed fashion that we begin to fully appreciate the avant-garde.