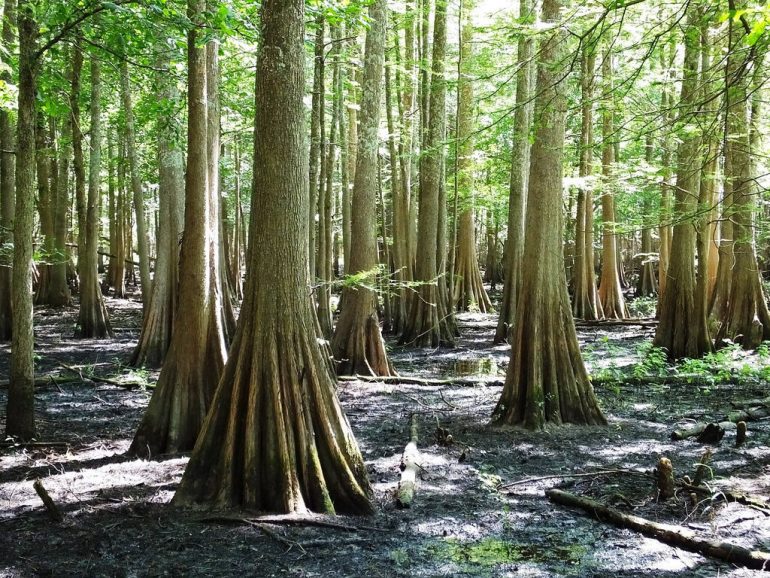 For a brief period in childhood, I was afraid of trees. It was after Hurricane Fran swept through North Carolina, and when the winds subsided trees had fallen on roads, houses, sidewalks. Maybe they would fall on me. And maybe trees in the South are scarier than trees elsewhere—the broad, labyrinthine magnolia, live oaks dripping with moss, bald cypress with their knobbly knees. Their symbolism is vast and complex in literature and life: trees as sites of lynching and hate, trees as key symbols in moonlight-and-magnolias literature, trees as refuge, sites of contemplation, markers of home.

Flora and fauna are often central when we think about what makes so-called regional literature distinct. But describing flowers and fields has the tendency to get treacly, and, especially in the case of the South, distract from the injustices that take place behind the curtain of green. At its best, though, writing about trees and flowers can evoke places that are at once familiar and disorienting. These spaces can act as sites to propagate pernicious and sentimentalized myths about a region. But they can also function as sites to question, refuse, and complicate regional mythologies. Descriptions of flowers, trees, and other flora probe the intersection of mythical and physical reality, sensory experience, memory and imagination.

From the 17th to the 20th century, southern poets used flora to contemplate the inevitability of death and decay, write glossily nostalgic odes to home, or try to justify secession. In contemporary southern poetry, trees and flowers remain present, repurposed as sites for remembering violence and complicating notions of personal and regional identity. Poets Evie Shockley and Neal Bowers probe the moral and emotional complexities of growing up in southern landscapes. Nineteenth-century poet Mary McNeill Fenollosa writes of southern flora from a distance, using it as a means to construct a fluid idea of home.

Evie Shockley’s “where you are planted” uses multiple registers to depict a complex relationship between heritage, self, and land. Shockley’s stanzas mix idiomatic, analytic, sensual, and observational language. The poem begins: “he’s as high as a georgia pine, my father’d say, half laughing. southern trees / as measure, metaphor. highways lined with kudzu-covered southern trees.” This stanza swings seamlessly between casual and academic speech, interpretation and observation. Another stanza begins with the sly “frankly, my dear, that’s a magnolia” as the speaker explains the tree to a clueless “northern girl.” The tone of the poem’s first five stanzas is playful, yearning, reverent: “one hundred degrees in the shade : we settle into still pools of humidity, moss- / dark, beneath live oaks. southern heat makes us grateful for southern trees.” Each stanza ends with the words “southern trees,” creating a lullaby-like, chant-like rhythm.

In the final stanza comes the first mention of violence, referencing Billie Holiday’s “Strange Fruit”: “i’ve never forgotten the charred bitter fruit of holiday’s poplars, nor will i : / it’s part of what makes me evie : i grew up in the shadow of southern trees.” Where “Strange Fruit” starkly contrasts saccharine southern pastoral imagery with the horrors of lynching, Shockley’s poem mingles measured nostalgia for southern trees with the violence of the history they stood through. In this final stanza the reader feels the full force of the multiple emotions that coexist in the speaker’s identity. Nostalgia for the trees is as deeply felt as horror at what happened under them; the “shadow of southern trees” becomes multivalent. There is the shade for which the speaker is grateful; and there is the far-reaching shadow.

The structure of Neal Bowers’ “For the South” takes a different structure than Shockley’s poem, but demonstrates similar nuance and multiplicity. The first two long stanzas are driven by anger. This anger could be tongue-in-cheek, self-consciously mocking the ubiquity of honeysuckle and magnolia imagery in southern poetry. Or, the speaker’s disgust could also be sincere: he’s truly glad to flee a homeland whose flora is excessive and claustrophobic, fungal in its fertility. Each stanza begins with “I hate.” “I hate the way / honeysuckle drapes / fences, blooms in the ditch / where everyone dumps garbage.” The stanzas generally sway gently from vitriol into a reluctant appreciation of beauty. The second stanza (which begins with “I hate”), finishes with “a span of Queen Anne’s lace / rocks the whole moon, and the sumac / runs dark against the hill.” Unlike Shockley’s poem, which is populated from the beginning, Bowers’ is without people until the final stanza:

I hate the drawl, the lazy voice
saying I’ve been away so long
I sound like I’m from nowhere;
the old hand gathering snowballs or peonies
or forking up an extra dish of greens,
bitter, just the way I like them.

Like Shockley’s speaker, Bowers’ arrives at an ambivalent, complicated acknowledgment of his roots. The poem also ends with “bitter,” though the bitter greens of Bowers’ poem are far less sinister than the “bitter fruit” of Shockley’s. In both final stanzas, though, is a strong sense of origin, and simultaneous wariness and embrace of that origin.

Many of the 19th century poems I’ve read about southern flora are of the romanticization-and-secession kind, but I found an interesting point of comparison in Mary McNeill Fenollosa’s “The Magnolia,” published in 1899. Fenollosa was a white woman born on her grandfather’s Alabama plantation, which was razed during the Civil War. She ended up marrying several times and living between Mobile, Boston, and Tokyo. She was particularly taken with Japanese flora, and her first book of poems is divided into two sections: East and West. “The Magnolia” has a wistful whimsy to it: “the woodland flowers for me, / The pallid, creamy blossoms of the dark magnolia tree! / I close my eyes; my soul lifts up to float with their perfume, / And dull the body lying in this narrow city room.” Her verse is more flowery (literally and metaphorically) than that of Shockley or Bowers, but, like theirs, her nostalgia and yearning has more complexity to it than some of her contemporaries. While she does cry out for “days that used to be,” she imagines “In distant land, the flowers still stand upon the dark green tree.” Despite her homesickness—for America, the South, or the Antebellum South—there is a sense of continuity in the concluding verse, an acknowledgement that we are the ones to give trees symbolism and significance.

What’s evident in Fenollosa’s poems is that she isn’t blindly attached to the flora of place she was born; rather, she views it in the context of the new places she’s travelled, with the knowledge that return is impossible. In “The Two Homes,” she writes from Japan: “the life is richer far, / Owning thus a double star ; / One must joy in alien ways, / Learn, adapt, and paraphrase.” It is the mixing of homes, of origins, of native and foreign flora, that delights the speaker and defines her sense of home. Flowers and trees serve as a celebration of home as emotional, evolving, and diverse rather than rooted and monolithic.

What is intriguing about the three poets, working in different modes and social contexts across centuries, is their ability to use their native flora to probe larger issues of identity, belonging, and regionalism, while keeping the plants themselves alive and moving. In the end, this is what can be scary, delightful, and important about flora: trees signal history without speaking.