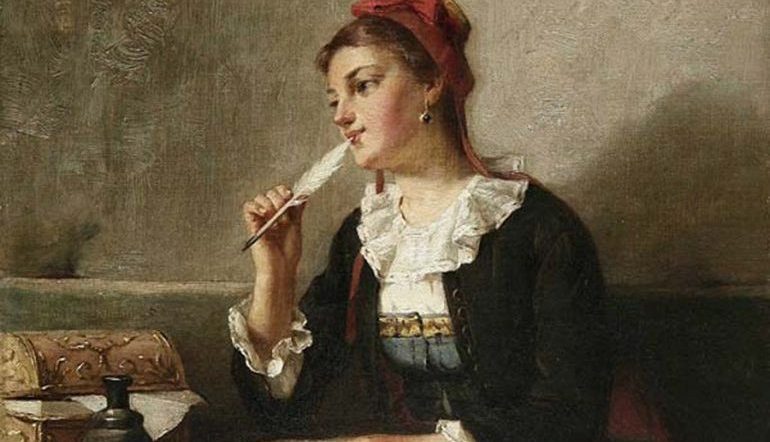 “The impulse to write things down is a peculiarly compulsive one, inexplicable to those who do not share it, useful only accidentally, only secondarily, in the way that any compulsion tries to justify itself,” said Joan Didion in her 1966 essay “On Keeping a Notebook.” I have never been compelled to keep a diary but have always wished I did, to revisit or reaffirm some old version of myself I shed as soon as the moment I passed through ended. Keeping a diary is simultaneously a romantic image and a risky act—the idea of someone reading me at my most neurotic and unedited as impelling a fear as re-reading anything my younger self recorded. And yet there is a great tradition of lettered women keeping diaries, from Anaïs Nin to Virginia Woolf, who wrote in her own published diary, that her “diary writing does not count as writing,” who wrote entries instead of fiction, citing her excuse as “the state of [her] mind.”

Diaries give a glimpse of the interiorities of a person making meaning out of the world. The tradition of diary-keeping often serves as a better record of history than anything else, since they can give us clues not only about places and dates, but about who said or didn’t say what, and what the writer thought about it all. But far too often they are not considered serious literature, for some reason, perhaps because of the gendered connotations we have of diaries—something I’ve heard applied to nonfiction writing as an insult, meaning “juvenile” or “small.” Didion writes she “always had trouble distinguishing between what happened and what merely might have happened,” a far more interesting exercise to a writer bent on molding life into a coherent series of causes and effects. Diaries offer writers, particularly women who historically have not had a public voice, space to reflect on and process their lives as they happen, as well as space to record the daily routines that compose a life.

In Heidi Julavits’s The Folded Clock, Julavits revisits her belief that keeping a diary as a young girl made her into a writer by rereading her old entries. “The actual diaries, however, fail to corroborate the myth I’d concocted for ­myself,” she discovers. “They reveal me to possess the mind, not of a future writer, but of a future paranoid tax auditor. I exhibited no imagination, no trace of a style, no wit, no personality.” The Folded Clock, published in 2015, is a grown-up diary that reveals a writer’s ability to manipulate even the record she keeps of herself, notably through the out-of-sequence entries (the final entries pre-date the opening ones by two years). Its pages exist beyond the record-keeping Julavits saw in her childhood diaries, each beginning with “Today I…,” although she uses this construction in The Folded Clock, but as something closer to thought-keeping.

Julavits maps her obsessions—with ghosts, ancestry, sharks, the tap handle she carries with her everywhere, E. B. White, The Bachelorette—with the clarity and brilliance of a writer examining the scattered thoughts her mind contains. She finds her wedding vows in a pocket of a rarely-worn coat, an object, like the tap handle, she clings to in order to hold fast to who she once was, and what she once said. “I am an object person. I cling to things. As a child I clung,” remembers Julavits. “The world was a challenge to stay in; I worried I’d be washed away.” This fear, then, common to many of us, is mitigated by recording a daily life, recounting its discoveries, and taxonomizing its materials.

Sarah Manguso’s Ongoingness, released the same year as The Folded Clock, traces similar topography. More like prose poems than Julavit’s out-of-order meditations, this diary, too, shows the fundamental impossibility of making a narrative arc out of an ongoing life. “I started keeping the diary in earnest when I started finding myself in moments that were too full,” writes Manguso, reminding me of a particular Eudora Welty line about finding the person who can catch our heart’s overflow. Some of us must find the blank pages too, or instead. We can, according to Julavits and Manguso—both of whom write about their husbands and children who, presumably were there to catch their hearts’ overflow—be known really only to ourselves, or the curated self we capture on the page.

The usual elements of a well-told story occur in the small shifts of the narrators’ attitudes—towards time, towards self, towards what, exactly, writing in a diary can solve or satisfy. Manguso’s diary, she writes, is “the only thing [she] ever wrote that wasn’t for an audience.” Of course, here we are reading it. Diaries, once the keepers of secrets and a most personal and untidy self, can be keepers of what we readers look for in memoir too. These books and other diaries, bent on locating and polishing the tight bud of a reflective mind, feel like reading something a layer under memoir, under letters, under anything that began with an agenda. When interiority lasts only as long as the body that holds it, leaving a manuscript behind with the records of what mattered and when, feels as close to permanence as we can reach.