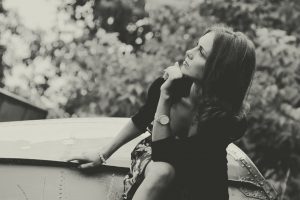 Before I picked up a copy of Offshore last month, it had been years since I read Penelope Fitzgerald, a British author who didn’t start writing until she was in her sixties. But the characters in this Booker Prize-winning novel caught my attention and I soon became completely emerged in Fitzgerald’s cleverly constructed world. Set on the Thames River, multiple houseboat dwellers share their stories of connection, loss, love, and confusion, all with a wry dose of Brit humor. This text might be nearing forty years old but the characters are dimensional and compelling. Reading through it, I discovered why they felt so contemporary: they were as present, conscious, and complex as real people are.

By the second page, a character named Richard reluctantly heads up a group of neighboring houseboat dwellers to discuss a communal problem. As the meeting is in full swing, Richard thinks, “Duty is what no-one will do at the moment.” The omniscient narrator’s voice in a following statement gives the reader details on why Richard might draw this conclusion:

Fortunately he did not have to define duty. War service in the RNVR, and his whole temperament before and since, had done that for him.

Later, when Richard has an encounter with a pushy associate who works in real estate, the narrator guides us once more:

Richard wondered why living on largish boat would automatically make him interested in small ones.

Here the adjective choice is key. Not “large,” “huge,” or “big,” but largish. It sounds afraid to commit to a clearer definition, as if he’d downplay his opinions for fear of what people might think. Because we’ve been permitted access to his thoughts, we see this is the real Richard, using such terms even to himself. Indeed, Richard struggles with decisions throughout the entire novel, and these tiny glimpses into his consciousness make his actions believable. Action follows thought, and since we know his thoughts, there is an intimacy between reader and character.

In a discussion between Richard’s crush, Nenna, whose husband has left her, and one of her two daughters, Nenna makes what first seems a bizarre statement: “Oh, Martha, my head aches. Baked beans would be just the thing for it.” But that statement resonated with this reader—when I’m sick, all I want is sauerkraut. Fitzgerald’s sensitivity to unusual desire is much closer to the way people actually think.

Heinrich von Furstenfeld, a chap of sixteen, visits Nenna’s boat briefly. Yet his introduction, most of it in a single sentence, tells us all we need to know:

Heinrich was exceptionally elegant. An upbringing designed to carry him through   changes of regime     and frontier, possible loss of every worldly possession, and, in the event of crisis, protracted stays with distant relatives ensconced wherever the aristocracy was tolerated, from the Polish Border to Hyde Park Gate, in short,    a good European background, had made him totally self-contained and able with sunny smile and the formal handshake of the gymnast to set almost anybody at their ease….

Fitzgerald’s narrator vacillates in her opinion of young Heinrich, careening from spoiled aristocrat to good-natured nice guy in one run-on gulp of words, not unlike the thought process one might go through while meeting someone new. A few pages later, he’s referred to as “a diplomat by instinct.” Yet we know, or we think we know, based on this introduction, that Heinrich is raised in a world where diplomacy has been part of his life since the cradle. How much instinct is really involved? By allowing several subtle opposing views of the same character, Fitzgerald mimics the way real-life people allow differing opinions to influence their impressions of others.

My copy of Offshore went from brand-new to dog-eared and peppered with sticky notes in a few weeks time. I can’t wait to breathe some movement into some of my own stories, mimicking the intentional characterizations that Fitzgerald does so well. Stripped nearly bare of physical details, Fitzgerald’s characters must rely on the idiosyncrasies of being human to give them dimension. This makes them ultimately rich, believable, and intelligent beings.