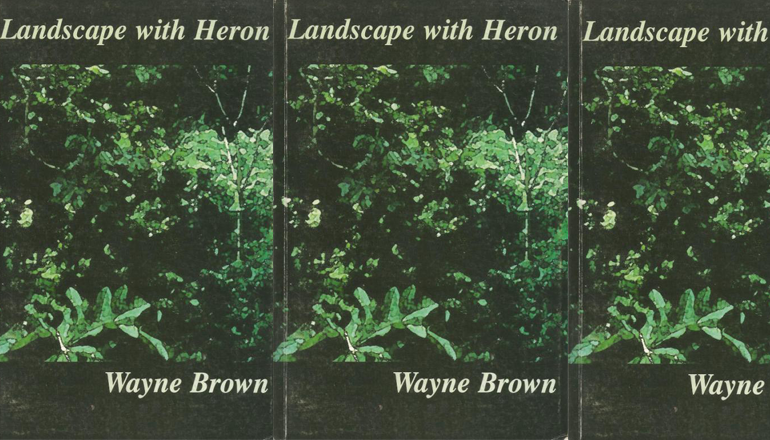 On the June afternoon when I first joined Lesley’s MFA faculty, during a break between meetings, I carried my coffee to an outdoor table where several other faculty members were sitting and asked if I could join them. Wayne Brown, the Trinidadian writer I’d only just met, looked up. He said to me, solemnly, “When you are old and gray and your grief has become a steady joy, then you may sit with us.”

Then, seeing my hesitation, he laughed and gestured me to sit.

It was the start of a five-year friendship I came to cherish. Blunt, funny, opinionated, unflinchingly honest and disinclined to suffer fools, Wayne was a writer’s writer. That his work isn’t better known in this country has always struck me as absurd—his “Landscape with Heron” should, by rights, be in every undergraduate short story anthology between Anderson and Carver.

Wayne was sixty years old when we met, but to me he seemed older. A heart attack he’d had while sailing (he managed, somehow, to sail home) and subsequent open-heart surgery in Cuba had aged him…as had the life he’d lived prior to those events, which I understood to be rich and full of struggles. He commanded respect in person and on the page, in his poetry and fiction. His weekly newspaper column for The Jamaica Observer made him a known name in Kingston, his adopted home. Yet, as I would later learn, he had few writing peers there. This teaching community in Boston, convened twice a year when we gathered for MFA residencies, meant a great deal to him.

Over the five years we taught together, Wayne and I became friends and devoted correspondents, though in a sporadic way that meant large areas of our lives were unknown to one another. We traded emails about life, writing, and–inevitably, given the nature of his columns—politics, our occasional disagreements prompting exchanges of long persuasive emails that, I’m fairly sure, didn’t persuade anyone.

Wayne died of lung cancer over two years ago. Many have spoken about his life and work, and I won’t try to do that now (though I won’t forego the opportunity to mention his wonderful books, which include Landscape with Heron, On the Coast and Other Poems, The Scent of the Past, Voyages, and Edna Manley: the Private Years). But I’ve been thinking, lately, about Wayne’s letters. And about the way writers speak to one another, when they sit down quietly to correspond.

All heartfelt letters–words sent across the void for another’s eyes—are offerings to be treasured. But to me, when writers write to one another, there’s an added element…just as there is when composers compose for one another, or artists paint for one another. There’s a sweetness in writing for another writer–addressing someone who understands the struggle, and upon whom the delight of finding the just-right word won’t be lost. And then there’s this: a writer’s word-smithing time is necessarily rationed, most of it reserved for the endless labors of writing for publication, not to mention teaching and editing. For this reason and others, writers are often solitary people. Letters that pierce that solitude, letters crafted with precious time and care, are gifts to the sender as well as to the recipient.

I love reading the correspondence of writers–the letters of Twain, Emerson, Melville, Gertrude Stein. Lately I’ve been reading Suzanne Marrs’ wonderful collection What There is to Say We Have Said: the Correspondence of Eudora Welty and William Maxwell. Welty’s and Maxwell’s voices, speaking up in modest, generous counterpoint from 1942 through 1996, evidence the deep satisfaction of conversing with the like-minded. William Maxwell shares with Eudora Welty the frustrations of writing (Novel comes to life, dies on me, comes to life, and dies. I wish it would do one or the other permanently.)…reflects on a manuscript by an aspiring writer (…it is very well written but constantly preserves a decent reticence, a proper economy of detail, and what is reticence in our line of work but the only fatal mistake?), and muses about the notion of protecting young readers from sexual material (This theory has only one fallacy, that I can see: it supposes that the young are reasonably pure, too, and I’m not sure that innocence isn’t the crowning accomplishment of maturity…). Eudora Welty, in turn, discusses the unsatisfying experience of having someone adapt her work for stage (All things that matter in this life are firsthand and direct and person-to-person. Our mistakes had better belong to us.), refers to a specific moment in a performance of MacBeth (the wonderful recipe scene (should I have called it that—double double)…), and anticipates reading a forthcoming story by J.D. Salinger (Knowing about a good story you haven’t read is like watching for a comet).

Good writers write good letters; no surprise there. But Maxwell’s and Welty’s letters and others make me think about gifts freely given—and about what a writer friend refers to as “generosity of thought”.

Wayne spoke, in his correspondence as in person, with generosity of thought. And the letters he crafted—whether humorous or gently upbraiding–were meant to be used. At his memorial service, it was striking how many of his former students quoted his e-mails.

During the years I knew Wayne, every major New England blizzard would be preceded or followed by a note from him: he was concerned over our wellbeing from Jamaica (inserting only an occasional eat your heart out when he mentioned Kingston’s balmy weather), and fascinated by news reports of to-him-stunning amounts of snow. Far more fearsome, from my point of view, were the hurricanes he described. I heard from him, over the years, of metal roofs sheared off and spinning through the air to land just beside his house, new beaches thrown up by the sea overnight. Friday night I lay in bed in solid blackness and thought: So that’s what ‘juddering’ means–meaning the insane wind, well, juddering the wooden window louvres. … Seems the living God is a furious God. As Hurricane Ivan bore down on Jamaica, Wayne finished preparing his house and boat for the onslaught, then sat back and waited for the storm to slam his island: ‘What’s beauty,’ rhetorically inquired the German poet Rilke, ‘but the beginning of terror we’re still just able to bear?’ Wayne’s opinions, too, could be hurricane-force, whether they concerned politics, the reasons Anna Karenina was superior to Madame Bovary, or a student who was insistently obtuse, despite being smart enough to know better: Such types really insult literature itself–which is of course our most reverent love. When I learned I hadn’t gotten a teaching position I’d been a finalist for, Wayne offered his own bracing brand of consolation: At this point I can either lie and say I’m sorry or say truthfully I’m glad. Writers’ lives are best angular.

Facing his own death, Wayne squared himself with characteristic directness. Amid descriptions of sailing in boisterous weather conditions, he related the oddness of feeling so healthy while knowing he was facing a death sentence; then, as his illness deepened, he grappled with his doctors’ conflicting predictions about how much time remained to him. I remind myself that Nabokov would have approved. He always said, “The future is merely an hypothesis, it doesn’t exist!” The only solution, of course, was a carpe diem attitude he seemed to perfect with the passing weeks. Mornings, Wayne wrote, I awake, watch the sun rise, say with a friendly nod, “Hi, Earth,” and go to work.”

On June 30th of that year, Wayne wrote: My first oncologists all confidently told me I’d be dead by August (I guess there’s still time), and I was able to look at that, really look at it, and see that it would be okay. (Well, with the caveats you can imagine.)

Writers are easily thought of as selfish people. We work alone, we interact with humanity through the peculiar medium of words on the page, and the act of writing absorbs our time and attention in ways that are often unfathomable from the outside. But the writers I know—and Wayne Brown in particular–practice what I find to be a particularly beautiful form of generosity: a commitment to telling the truth.

Wayne’s notion of friendship, it always seemed to me, was to render life in the truest possible words, whether or not these words were comfortable for the recipient. He wasn’t in the business of softening blows–or perhaps it’s truer to say that, in his view, the softening of blows was accomplished as soon as one understood that facing the truth was the right thing to do…and that this was what it meant to be human. Facing life honestly, we could stand side by side as human beings. Anything less wasn’t true friendship.

One evening, when I’d known Wayne about a year, I picked him up in Cambridge and drove him out to my house for dinner.  As we entered the house, I heard my daughter—who was then two years old—sobbing.  She’d just that moment bumped her head, and as soon as I stepped into the house she ran from the babysitter to me.  I picked her up—she was still crying hard in my arms—and she looked over my shoulder at Wayne and somehow found her breath enough to say to this tall near-stranger,  “I had a shock.”

And she settled down—as though simply having life explained that way helped her accept it.