Home
»
Critical Essays
»
On Not Noticing 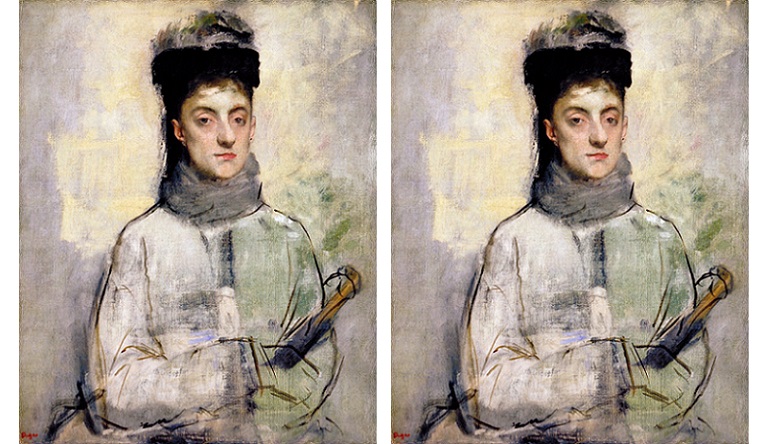 At the National Gallery of Canada there is a painting by Edgar Degas entitled “Woman with an Umbrella (Berthe Jeantaud).” It is not one of Degas’ better-known pieces—there are no ballerinas, no racecourse, no nudes on display. Its subject, gatherable from the title, is simply a woman holding an umbrella, nothing more. Yet on a visit to the museum last year, I stood in front of this painting for many minutes, and returned to it again before leaving, feeling a slow, dawning apprehension before its modest subject and scale.

There is a cartoonish quality about her body and the umbrella she holds—it is the sketch of a painting, with an essential impermanence. In contrast, all of Degas’s considerable classical training has been brought to bear on Berthe Jeantaud’s face. It is profoundly alive. She stares at the viewer with a hint of a smile; not the mischievous smile of the Mona Lisa, however—the upturned lower lip gives it a look of feigned amusement, and this, coupled with raised eyebrows over slightly hooded eyes connotes a feeling of wry, weary pride and mild contempt for the onlooker and painter himself. Though a good sport, she seems bored by the exercise.

The face emerges from the mist of the body and background, appearing to exist in an entirely different painting. It is truly startling, almost to the point of being a visual trick, a trompe l’oeil gimmick, but not quite. Staring at it, I was struck by how accurately it seems to model the way we perceive the world. It is a painting about how to paint, how to see, and it has a lot to tell us about how, as writers, we might use detail in creating our fictional worlds.

Imagine you have just walked into the living room where a cocktail party is taking place. What do you see first? This, of course, depends on who is doing the seeing. Some people might notice the room itself, the décor, the enviable if disused piano in the corner, the primitivist geegaws asserting an ambiguous taste level; others might notice the music being played—Isaac Hayes, say, spinning on a turntable; most people, probably, would look for the hostess, hone in on her and the person next to her, look at their faces.

Degas’s portrait rings true in this regard—we pick human faces first out of the fog of perception. This is axiomatic, a phenomenon known as pareidolia—walking through the woods on a dark night, we locate faces where there aren’t any, and further imagine they’re malevolent since we don’t recognize them. From an evolutionary standpoint, we are hardwired to find friends and family, possible sources of food and protection. Though the lag time may be milliseconds, or less—near instantaneous—we generally key into faces faster than their surroundings.

More generally, we register different aspects of our surroundings at different speeds. We do not absorb and register a totality of the moment we’re in, or really a hyper-specific amount of unnecessary detail, however much our brains’ processors may make it seem that way. This is something that has always slightly bothered me about John Updike and a similar pantheon of ultra-rich descriptive writers. Consider the following description of leaves as seen through his office window:

The grape leaves where they are not in each other’s shadows are golden. Flat leaves, they take the sun flatly, and turn the absolute light, sum of the spectrum and source of all life, into the crayon yellow with which children render it. Here and there, wilt transmutes this lent radiance into a glowing orange, and the green of the still-tender leaves—for green persists long in autumn, if we look—strains from the sunlight a fine-veined chartreuse. The shadows these leaves cast upon each other, though vagrant and nervous in the wind that sends friendly scavenging rattles across the roof, are yet quite various and definite, containing innumerable barbaric suggestions of scimitars, flanged spears, prongs, and menacing helmets.

Paradoxically, vividness of description and detail here comes at the expense of realism. To put it simply, no one besides a writer—a professional noticer—notices this much, and certainly not in a near instantaneous time frame; not in a “taking in.” There is no reason to. This style of writing, which I admittedly enjoy and admire, is less interested in creating narrative “reality” than it is in creating an aesthetic experience—detail as art for its own sake.

Degas’s woman with the umbrella, in its way, more accurately models the way we cognitively see others than a photorealistic painting would. True, in real life, we would not see irrelevant details like the buttons on her coat as a visual blur, but we certainly would see them as a cognitive blur, in memory. And what else is a painting—or, for that matter, a scene rendered from a grab bag of authorial noticing—than a memory articulated in an eternal artistic present?

Description is, in fact, more useful for what it says about the noticer than the noticed. A narrator who walks into said cocktail party and notices the drunk man in the corner bent into his drink, the brown teeth of a laughing woman, the incipient cracks in the apartment’s ceiling, is a different kind of narrator than the one who notices the hostess’s silver bracelet or the citrus perfume she wears. In fact, the same narrator or protagonist could notice either of those things, depending on their mood. But if they notice all those things and more, a reader’s sense of them begins to dissolve. Past a certain threshold, the clearer the description, the more unclear the describer.

One example of this sort of description is a kind of detail James Wood describes as “off duty” detail. For example, “She walked past a man wearing a dirty yellow raincoat.” This is detail merely for the purpose of world construction, to create a facsimile of reality by dint of there being lots of things. Arguably, this does in fact model reality—there are lots of things in the world we don’t care about. But these are things of which we’re barely, peripherally aware and this, again, is the point. Fictional realism models the subjective experience of moving through the world, with one’s attention attenuated by desires, worry, lack of sleep, legal and illegal substances. The placement of effectively arbitrary details in fiction, if not justified by character or narrative consciousness, draws attention to the arbitrariness of the detail, and in a larger sense, to the fictionality of the fiction the detail is seeking to concretize. To an extent, then, it can be argued that the less objectively faithful an author is in modeling reality, the more effectively they achieve it.

Paula Fox’s Desperate Characters serves well as an example of how Degas-like subjectivity can model a character’s reality. The protagonist of Desperate Characters, a middle-aged Brooklynite named Sophie Bentwood, is a neurotic and neurasthenic, a person so preternaturally sensitive that it takes her most of the novel to get a cat bite treated. Her sensory apparatus is so acute that her observations at times are like a photo with the exposure turned all the way up, a kind of feverish over-noticing.

In particular, the metaphorical descriptions in Desperate Characters seem to model Sophie’s consciousness, and this is a novelistic rarity—typically, however focalized a narrative’s description is via the main character’s consciousness, an author’s metaphors will tend to derive as much from local theme or proximal concerns. Not so in Desperate Characters. Here’s Sophie entering a cocktail party and seeing the host, an old friend:

She liked his somewhat battered face, the close-fitting English suits he bought from a London salesman who stopped at a mid-town hotel each year to take orders, the Italian shoes he said were part of his seducer’s costume. He wasn’t a seducer. He was remote. He was like a man preceded into a room by acrobats.

This is an astonishing metaphor, one of my favorites in literature. Like many of Fox’s metaphors—via Sophie—in Desperate Characters, it compares a real thing to something that doesn’t exist. What, exactly, is “a man preceded into a room by acrobats?” I have no idea, but the first time I read the book, I glossed right over it, so neatly did it capture Sophie’s sense of this man. He is someone who foregrounds a kind of theatrical, lordly extroversion to mask an interior iciness. This is perfectly conveyed, obliquely summoning a king and court jesters, while remaining, strictly speaking, meaningless.

Again, the obliquity of this description paradoxically provides a clearer picture of Sophie’s perceptual mode than a clearer metaphor would. Her thought process is fantastic, blurred, and so the metaphors she draws are, as well. Another favorite: a bus driver has “hands like paper hands.” This simile is tossed off, yet how perfectly and absurdly does it capture Sophie’s reality. A real thing is like the imagined version of it, asserting a primacy of the unreal, and, like Degas’s woman with the umbrella, realism grades with quick effortless movement into fuzzed subjectivity.

Since novels model human consciousness, and the experience of being human is an experience of incomplete awareness and self-knowledge, a character’s imperfect noticing of the world around them is the ironic space where narrative itself happens. The problem with overly excessive or clear description is that it overloads this space. A beautiful melody is, more than the notes that constitute it, the eleven virtual tones each actual note omits. A harmony may amplify and complicate the melody, and multiple melodies on top of each other may constitute a fugue, but at some point the tones become a wash of sound, as over-mixed paint tends gradually towards mud. Likewise, Berthe Jantaud’s face is startling and vivid precisely for Degas’s inattention to everything else—were she “completely” painted, the effect would be lost, and the painting would merely be one more competent portrait. As with writing, the silence says as much, or more, than the word.

Adam O’Fallon Price is a writer and teacher living in Carrboro, NC. The paperback edition of his first novel, THE GRAND TOUR, is now available on Anchor Books. His short fiction has appeared in The Paris Review, VICE, The Iowa Review, Glimmer Train, and many other places. His podcast, Fan's Notes, is an ongoing discussion about books and basketball. Find him online at adamofallonprice.com and on Twitter at @AdamOPrice.