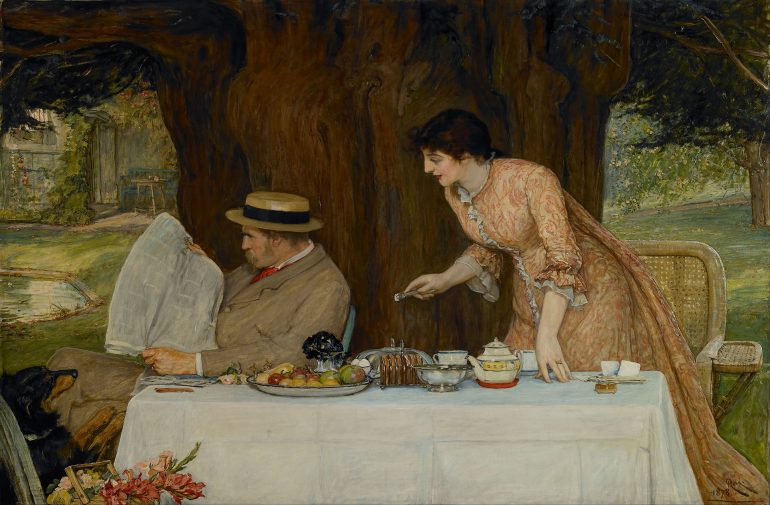 At the Contemporary Museum of Art in Montreal, Ragnar Kjartansson’s “The Visitors” plays on nine screens in a dark theater. Each screen features a single musician set to the backdrop of a room in a chateau, which is in disrepair: one woman in a pale lace dress plays cello with a French door open to the outside gardens, one man plays guitar in a claw foot bathtub. All nine musicians chime in to sing: “Once again, I fall into my feminine ways.” In the theater, museum-goers experience all nine screens at once: a simultaneous narrative. In a second theater, which exhibits Kjartansson’s “World Light,” four screens play different scenes from a Halldor Laxness novel at the same time. In the same moment, viewers watch a woman pull on her dress and stockings in the morning, while across the room she fights with her future lover. The presentation of “World Light,” a Nordic story told in its entirety in one moment, calls into question the sequencing of narrative—that is, that a narrative should be read from beginning to end, or that those components should be separate at all.

To consider a narrative that can be digested in one sitting—in one moment—is to consider the fleeting quality of such a narrative. As I toured Los Angeles last week during AWP, I thought of the city itself as a brief text: whole storefronts in downtown LA covered in peeled yellow paint, black letters distinguishing shop names faded and irrelevant. Seeing one corner store on Pico Street is the same as seeing them all: they can be taken in in one moment, can be finished in the next. During the day, the strip of Sunset Boulevard that drags through West Hollywood is as dead as the heat; by night, manicured crowds pile into The Abbey or under the light-trimmed trees. The entire city is brief in its moments and seems to quench its desert thirst with economy of time. Even AWP moved in flashes. Just one minute after the conference ended on Saturday workers moved in to tear up carpets from the convention floor and arrived in droves to collapse tables, as if the entire event had been a scripted scene on a Hollywood set.

It’s not that brevity should be equated with superficiality, though, and not that brief narratives like flash or micro are inferior to longform narratives, but that they require a different form of interaction.

Social media platforms might be the heart of this simultaneous narrative. While Twitter is an easy place to point to brevity in narrative, a place for now stories in under 140 characters, Instagram is better. Photos on Instagram can carry their own narrative, but captions below the photos add layer – the captions of an Instagram photo are mini ekphrastic responses, for instance. Like Kjartansson’s work, these narratives can be experienced at the same time by many different people, as long as access to the Internet isn’t a hindrance. The most fleeting of all is Snapchat: a single picture can exist between a person and their Snapchat friends for as little as one second, and when a story does stick around its image slips away like the shadow of a sundial, a warning that it won’t last forever. It only takes one click to share these social media narratives en masse, or to change them, which makes them seem as fixed as the letters of a neon sign on Sunset Strip: flickering, threatening to burn out and disappear.